The holiday season includes the turn of the year. On New Years Eve, revelers celebrate the end of one year and the beginning of another. This evening is also the night of Mari Lwyd in Welsh tradition. The traditions that surround the celebration of Mari Lwyd are straight out of Halloween. There is going door to door for treats while wearing costumes and there are skeletons! One skeleton in particular and that is Mari herself. But this is not a human skeleton, this is the skeleton of a mare. Imagine opening your door and finding a skeletal horse holding a bag and singing. Yes, singing!

The song she sings is in Welsh and she is usually surrounded by other revelers joining her in chorus. The song is basically asking the person who answers the door to let her inside. But we all know what that means when it comes to Black Eyed Kids. Could the same be true for Mari? We're not sure if in the end you die, but it sounds like fun getting to the place where Mari and her party are invited to enter. A battle of wits known as pwnco is entered into after Mari sings her song. This is a battle full of insults, riddles and challenges. These are exchanged back and forth in rhyme. 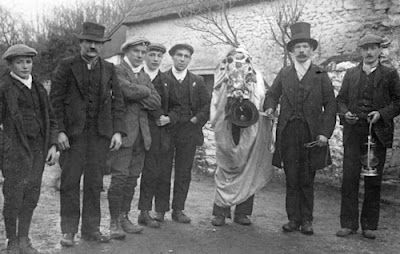 Nevermind that Mari and her group are a bunch of fiends risen from the dead. If she wins, they get to come in. The ancient practice also incorporates the festival of lights representing rebirth and hope at the new year. So its not all bad. In the areas that celebrate Mari Lwyd, they make a puppet from the skull of a horse, either the real thing or something fabricated, using a stick and a white cloth to conceal the puppeteer taking the figure around. She is occasionally decorated with colorful ribbons and winter vegetation like pine branches and holly.

It seems rather macabre, but really no worse than watching your sister-in-law barf into the kitchen sink!
Posted by Diane Student at 5:44 AM