Wait a minute! There's a Bigfoot for Christmas?! And this isn't a tradition floating around from the damp Northwest of the United States. Bigfoot doesn't just hang out in old growth forests, he hangs out in the Balkans too. In countries like Bulgaria, Serbia, Macedonia and even Turkey, the character of Karakoncolos can be found and he usually only comes around during the holidays...kinda like the scary in-laws. He's a lurker and this isn't behind trees. He just hangs out on street corners. No, that isn't the local creepy pedophile leaning on the lightpost, it's the Christmas Sasquatch! 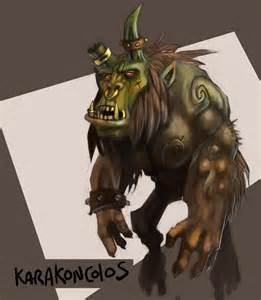 The Karakoncolos waits around until his victim arrives and then he pounces...with a riddle. We know, you thought he used his big gaping teeth to eat some poor naughty kid like all the rest of these Christmas baddies. Well, when we use the term "victim," we really do mean victim. If you screw up answering this riddle, you get the death blow from this fiend! How do you keep from screwing up the answer? Just make sure you incorporate the word "black" in your answer somehow. Apparently, that is some kind of magical word. What's black and white and red all over? Just make sure to say, "A runover zebra in the road, with BLACK stripes!" We know the answer is newspaper, but go with it, okay?

Now you probably think you are clever and have the perfect solution: just avoid street corners. Not so fast Mr. Smartypants! The Karakoncolos can visit houses too and he likes to do so at night. He pretends to be one of your relatives, calling out in distress, "Yoo Whoo, I'm out her on the landing with a broken leg my little brother." Sometimes he dresses up like a little girl - this is a whole nother level of terrifying- and then when the hapless victim comes out of the house - BAM! He puts them into a trance! That causes them to freeze like a night terror/sleep paralysis thing and then that person freezes to death in the cold.

Serbia adds in the unholy, unbaptized twelve days of Christmas and demons and ghosts run rampant. The Karakoncolos can't resist joining them and he uses this opportunity to jump on backs and demand rides. He's heavy, so it's grueling and the rooster's crow in the morning is welcome relief. After the holiday season, the Christmas Sasquatch has to retreat back into the shadows...until the next Creepy Christmas!
Posted by Diane Student at 6:19 AM