The custom of exchanging Christmas cards started in the United Kingdom during the 1800s. Sir Henry Cole was a civil servant that helped set up the post office in the UK and he enlisted the help of an artist friend to make colorful cards that they could sell for people to mail to each other. Most Christmas cards feature winter landscapes or festive items that pertain to Christmas like trees, presents, Santa, elves, snowmen and other such symbols. It was during this Victorian period when cards were just first getting started, that some pretty creepy designs emerged and they cause one to think of anything, but a "merry" Christmas.

We've discussed Krampus previously and he was very popular on Christmas cards during the Victorian period. We wonder how many people opened the envelope to see the following and wondered what their friend or family member was trying to convey: 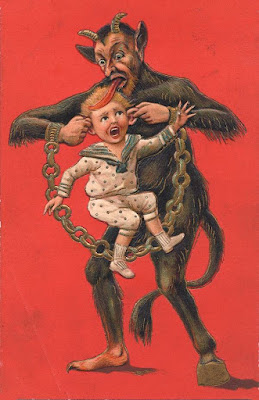 The robin has been a traditional Christmas symbol in the United Kingdom for a very long time. Robins are used to decorate the Christmas tree, cakes and cards. They are depicted just as they are in life: small, colorful and alive. Usually. But sometimes, well, the robin is: 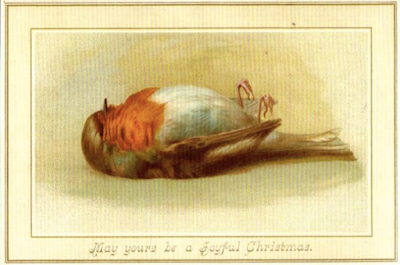 The dead robin was actually seen as a good luck symbol. It was tradition to kill a robin or wren for the New Year. The dead bird looks rather peaceful and that is also another thing it was meant to symbolize. It makes some sense, although it is unnerving. But we have no idea what this is suppose to represent: 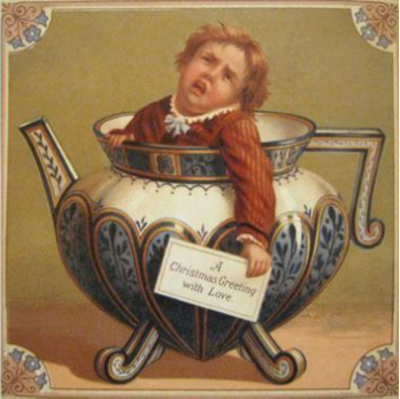 The card reads, "A Christmas Greeting with Love," but this agonized child inside a teapot doesn't immediately make us think of love. Is he boiling in some tea? Does the other side of that card read, "Krampus is coming for you?" And then there is this card, which just has to be the result of a bad acid trip: 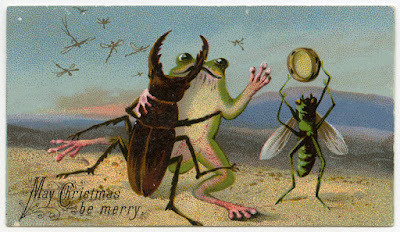 Now, the frog on the above card seems like a jovial guy. He's dancing with a bug after all, rather than eating it. But what the heck is going on with this frog below? Did he really just stab that other frog to death and then rob him? What kind of a Christmas are we wishing the person who receives this card: 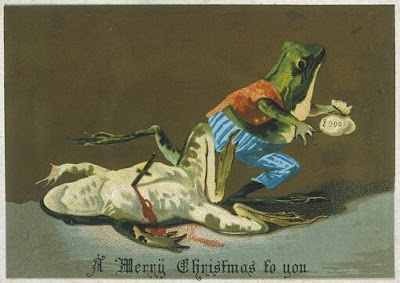 So um, yeah, Merry Christmas to you all. I'm going to make some creepy cards!﻿
Posted by Diane Student at 7:22 AM