The fabulous blog Obsessed with Skulls, wrote a scary version of the Night Before Christmas in 2013 that we thought we would share with you all. It makes good reading by the crackling fire on Christmas Eve as we await the arrival of Krampus.


The Nightmare Before Christmas

Twas the nightmare ‘fore Christmas, and in the graveyard
Not a zombie was stirring, and the front gate was barred.
Severed legs were a-hanging, not a crypt was left bare,
In hopes that Skull Santa soon would be there.

Zombie children were nestled all snug in their tombs,
While overhead witches flew ’round on their brooms.
Momma zombie with death shroud, and I in my cap,
Had just settled our skulls for a long winter’s nap.

When out by the tombstones there arose such a clatter,
I sprang from my coffin to see what was the matter.
Up out of my grave I flew like a bat,
And startled poor Percy, our ancient black cat.

The moon on the breast of the new-fallen snow
Gave the lustre of death to objects below.
When, what to my wondering eyes should appear,
But a miniature sleigh, and eight skeletal reindeer.

With a bony old driver, aglow with arcana,
I knew in a moment it must be Skull Santa.
More rapid than death his coursers they came,
And he whistled, and shouted, and called them by name!

As dry leaves that before the wild hurricane fly,
When they meet with an obstacle, mount to the sky.
So up to the mausoleum the coursers they flew,
With the sleigh full of skulls, and Skull Santa too.

And then, much like thunder, I heard on the roof
The clinking and clanking of each skeletal hoof.
As I drew in my skull, and was turning around,
Down the chimney Skull Santa came with a bound.

He was dressed in black leather, from his head to his foot,
And his clothes were all tarnished with grave ash and soot.
A bundle of skulls he had flung on his back,
And he looked like a demon, prepared to attack.

His eye sockets were hollow! his skull like a bowl!
His cheek bones were sharp, and his nose just a hole!
His droll little mouth was drawn up in a grin,
And a beard on his jaw did conceal his chin.

He was skinny and bony, a damned scary sight,
And when first I saw him, I shivered with fright!
A red glow in his eye and a clicking of teeth,
Like cold hands of death reaching up from beneath.

He spoke not a word, but went straight to his work,
Skulls and bones he laid out, then turned with a jerk.
A long bony finger he pointed at me,
And cackling madly, rose up the chimney!

He sprang to his sleigh, to his team gave a whistle,
And away they all flew like the down of a thistle.
But I heard him exclaim, ‘ere he drove out of sight,
“Scary Christmas to all, and to all a good-fright!” 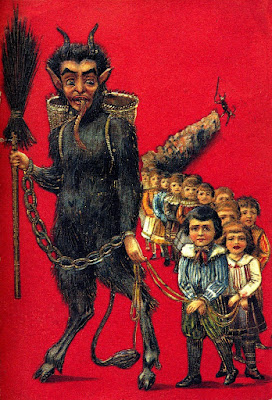 Posted by Diane Student at 5:59 AM