A snowman coming to life is spooky when you think about it! The original story of Frosty the Snowman is as follows: 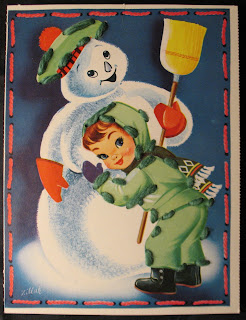 Frosty the Snow Man came to town one bright, cold winter's day. The first real snow of the winter had fallen the night before. In the morning, out came the children, and they started to roll snowballs. Round and round the snowy yard they rolled the snowballs. Soon they had two fine big ones. Round and round the yard again-there was a little snowball just the right size for a snow man's head. Billy ran home and brought two bits of coal to use for the snow man's eyes. Sally have him a button nose and a funny corncob pipe. Tommy brought floppy galoshes and a scarf for the snow man. And Joe brought him a pair of old red mittens to wear.

"Now we need a hat ," said Sally and Joe. So they all began to look around. Sally found an old cap. But it didn't look just right. Billy found a battered felt hat. But it still didn't seem right. Just then, down the street came the whistling wind. And it blew to their feet a shiny top hat.

"Just what we need!" cried Sally and Joe.

It was Tommy who picked up the shiny top hat and put it on the snow man's head. Zing! Tommy's hand sprang back with a shock. "It's magic" gasped Tommy.

"So it is," said a voice, a deep, chuckly voice they had never heard before. "And a pleasant sort of magic, if I do say so myself."

"It's the snow man!" whispered Sally. And so it was.

If you have never had a snow man for a friend, you can scarcely imagine all the fun those children had. For Frosty took them coasting-and never had their sleds slid so swiftly and far. Frosty helped them build a snow house- and never had blocks packed so firmly and well.

They all went ice skating- and the magical part was that while they were with Frosty, then children could stay out and play in the snow and never get shivery cold. Was it Frosty's warm heart, or his magical smile? Whatever it was, they thought it was fine. Each morning when the children came out to play, Frosty had a wonderful plan all set.

So they all joined hands and away they skipped, off towards town where the shops stood in rows. It was fun showing Frosty around! For he thought every window was wonderful. All around the town they led Frosty that day, while the warm wintry sun shone down. Soon they came to a corner and around the corner came a warm, gusty wind. Off went Frosty's hat. And away went Frosty after it.

Then Tweet! sang the traffic cop's loud whistle. And the children could not follow Frosty, because
traffic streamed by--buses and trucks and family cars. Tweet! went the traffic cop's whistle again.
The crossing stood empty before them now, but there was not a sign of Frosty to be seen.

Only down the street his top hat rolled, all by itself in the melting snow.

"Mr. Policeman!" the children cried. "Where has Frosty the Snow Man gone?"
"Oh," said the policeman. "Frosty the Snow Man has gone away. Where all snow men go on a sunny day. But he'll be back at your bidding and call. Whenever great heaps of snowflakes fall."

There is a little story behind the story here. Two towns in New York claim to be the setting of the story: White Plains and Armonk. Armonk takes the claim so seriously that they have an annual parade for Frosty. For this reason, we thought it would be interesting to add a little more creep to the story than what is already involved. After all, a snowman coming to life is just a tad creepy don't you think? But what Armonk? Are there hauntings in or around this town? We found a pretty interesting place to share with you!

Harrison is about five miles from Armonk and it is home to Buckout Road, a road just oozing with urban legend. When reading the story, the legend of Bloody Mary comes to mind. Apparently, you drive down Buckout Road until you see a red house or a house marked with a bunch of Xs. You are suppose to stop your vehicle and honk your horn three times. After you do this, the real fun begins! Flesh-eating cannibal albinos come streaming out of the house and well, you better just hope the door locks hold. The way this legend got started is with a story about teenagers driving to a house to taunt albinos living there. One day, they decided to put a prank in the mailbox. When they opened the mailbox, a child's head rolled out and they started calling the road "Head Road."

Others claim that the legend involves witches. Three women were accused of practicing witchcraft  and they were burned at the stake on Buckout Road. Nevermind that no witches were ever burned at the stake in America. And then there is the story of the man for whom the road was named, Isaac Buckout. The story is that he shot his wife and a neighbor and the neighbor's son with a shotgun. He suspected his wife was cheating on him, but not with the neighbor. Nobody knows why he did it, but he was convicted and put to death for the crime. Or is the road named for Mary Buckout who hung herself near the road? She is reputedly our Lady in White here!

So now when you sing "Frosty the Snowman," think twice!
Posted by Diane Student at 7:19 AM