Many of the traditions of Christmas are rooted in Pagan practices. The Winter Solstice is the darkest and longest night of the year. The myths of the Norse goddess Freya feature her weaving the fates of mankind at her spinning wheel. The Norse word for wheel is Jul or more commonly, Yule. The Christmas wreath is round to signify this same wheel of Fate. Because of her seer powers, Freya could see the future of her soon to be born son, Baldur. He was going to die. She went round to everyone and everything to secure pledges that they would play no part in his death. However, she missed the mistletoe.

Loki, the Norse trickster god, saw this and he crafted a dart with the mistletoe's poison. Then he challenged Baldur's blind brother to a game of darts and as you probably already guessed, he helped guide the brother's hand to throw the dart at Baldur. The mistletoe became a part of the Yule season from that time. Rome used mistletoe during Saturnalia as well. It was eaten during fertility rites.

The Christmas tree was brought inside to help keep the wood spirits warm. Food and treats were put on the trees for the spirits. The Winter Solstice is a time of visions. The Celtic Mare Goddess known as Rhiannon, rides through the dreams of people at night and transports them to a place where they can create their own visions. 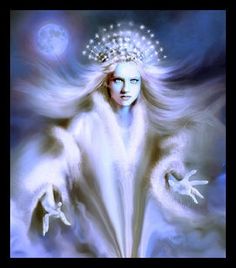 This is all interesting, but not very creepy, right? If we look to the Viking Goddess of winter, we find some pretty spooky stuff. Her name is Skadi and that word means shadow or shade. Shadow people would find comfort in her presence. She is a dark magician. Venomous snakes, wolves and the sythe are sacred to her. Priestesses of Skadi were said to have bathed in blood to prepare themselves. Skadi isn't the only creepy goddess from the Winter Solstice. There is also Perchta who was also known as Holda. People would leave out food for her during the Christmas period, so that they would have prosperity in the New Year. Holda was the goddess of death and destiny. She shared much in common with the Norse Freya. Witches claimed to ride with Holda in the hunt. She was ambivalent towards children and she was used as a bogey person to keep kids on the straight and narrow. She rewarded good kids at Christmas. Naughty kids were severely punished and this usually entailed her carrying them off into the woods. She would keep the children in wells and eventually turn them into Faery changelings.

Changelings were substitutes left for human children. Faeries would steal babies and replace them with a lesser creature. The faery magic would fool the human parents into thinking that the replacement was actually their child. In reality, the substitute was usually a faery child. They usually have deformities and are temperamental. The faery folk would keep the human babies as their own or use them as slaves. There are some who believe changelings are children of the Devil and have no souls. 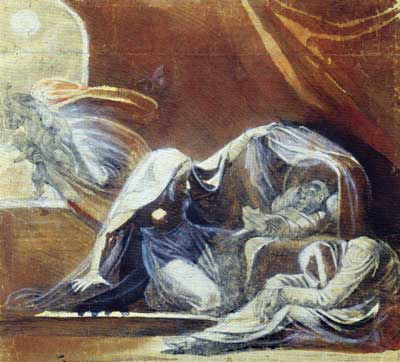 So as you can see, Christmas traditions and lore can be woven in such a way that one can end up in the creepy place of changelings. Who would've thought that changelings and Christmas could go hand in hand? See, HGB can use pretty much anything to add a little creepy to Christmas!
Posted by Diane Student at 6:30 AM