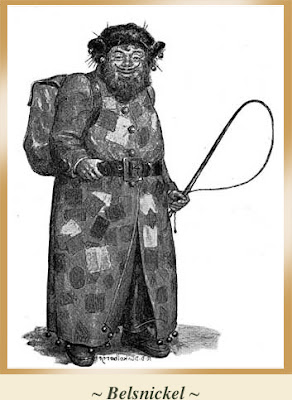 Germany must have had a bunch of really bad kids because the Christmas lore of that country is rife with monsters to dole out punishment to bad kids during the holiday season. There is Knecht Ruprecht who is the most widely known helper of Santa in Germany. He appears in clothing most suitable to a farmhand. He carries a staff and a bag of ashes and walks with a limp. The bag of ashes is used to beat children who tell the monster that they cannot pray. If they can pray, they may receive a piece of fruit. Fairies accompany him at times as well as men with blackened faces, which seems a tad frightening. But even scarier is the knowledge that Ruprecht was a name for the Devil in Germany!

Then there is Ru Klaas or as he is more commonly known, Belsnickel. Ru Klaas means "Rough Nicholas" and Belsnickel comes from belzen, the German word for "wallop." He is a male character that is usually seen wearing shaggy clothing that is dark and most usually made with some type of skin or fur. He is a dour character and carries a switch that he uses to beat the bad kids. He occassionally hands out candy to the good kids. Some tellings of the legend claim that the switch is only used to make a scary noise to warn children that they better shape up before Christmas arrives. But we know better! Belsnickel crossed the pond with the Pennsylvania Dutch and still survives in their customs.

So if you are in Germany for Christmas, you better just be good!
Posted by Diane Student at 7:19 AM