HGB Ep. 160 - The Life and Afterlife of Boris Karloff


Moment in Oddity - The Land of Giants

Did you know that there is a place in Northern Island that could be considered the land of the giants? Before you go thinking that some kind of fairytale is going live in Ireland, we have to tell you that it is a genetic thing. When a tumor grows on the pituitary gland, it tends to lead to a disorder called Acromegaly or Gigantism. You are probably familiar with famous giants from the past like Alton, Illinois' Robert Wadlow. In Mid-Ulster, Ireland, about 1 in 150 people carry a genetic mutation to the AIP gene that leads to an overproduction of growth hormone. The gene traces back 2500 years and this is the highest proportion of people in the world to have that gene. And while giants in fairytales are powerful and sometimes scary, modern day giants are generally debilitated by the disease and it leads to early death. Ireland is rich in folklore, so it seems only fitting that a land of giants would be found here. A hotspot for giants centered in one small area of the planet, certainly is odd!

This Day in History - Black Tuesday

On this day, October 29th, in 1929, the worst stock market crash in history occurs and becomes known as Black Tuesday launching the Great Depression. The Roaring Twenties had ushered in a time of opulence and prosperity. Overproduction in the agricultural sector and excessive speculation helped usher in the beginning of the crash in October of 1929. The slide started on Black Thursday, October 24th, with the Stock Market losing 11% of its value right after opening. The sell-off continued into Monday with a further loss of 13%. The complete crash came the next day on Black Tuesday. There was a record trading of stocks that would last until broken 40 years later on that day and an additional loss of 12% occurred. That day $14 billion was lost. The Great Depression would follow and last for ten years marking the worst financial crisis of the 20th century. The Stock Market Crash was not the only factor leading to the Great Depression, but it helped catapult the economy into the inevitable.

The Life and Afterlife of Boris Karloff (Suggested by Luv2Shop) 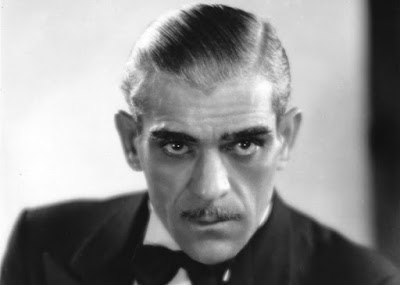 Boris Karloff was a man of many talents who made a name for himself on stage and screen. Fame eluded him until he stepped into the heavy boots of a classic movie monster known as Frankenstein's Monster. It was a role that Karloff would not even be credited with, but it launched him into more horror films as he became an overnight sensation. He would do many things in his career, including providing the voice of the narrator and the Grinch in the 1966 classic holiday cartoon How the Grinch Stole Christmas. And it would seem that a part of him continues in the afterlife as well. Join us as we explore the life and afterlife of Boris Karloff!

William Henry Pratt was Boris Karloff's birth name and he was born on November 23, 1887 in East Dulwich, London. He was the youngest of nine children and grew up in Enfield. His mother passed away and his siblings basically raised him. When he had grown up, he decided to attend Kings College in London. It was expected that he would follow his brother Sir John Thomas Pratt into the British Foreign Service. Fate had other plans and Karloff dropped out of college in 1909 and he decided to go for a change of scenery in Canada. He found himself working in hard labor and he injured his back and he would suffer from back issues his whole life. Karloff had always wanted to be an actor and he decided to join an Ontario-based touring company of actors. He got into the troupe by lying and telling them that he was an experienced British actor. He had the accent, so why wouldn't they believe him? It was while this troupe traveled the United States that William Pratt would become Boris Karloff. Karloff wanted an exotic sounding name and he thought Boris fit the bill. Karloff was a derivative of Karlov, which had been an old family surname. There are those who claim that he changed his name to prevent embarrassment for his siblings and he figured they would disapprove of his profession.

Karloff decided that he wanted to move from the stage to the screen and he headed for Hollywood. He was broke when he arrived and willing to do any part offered him. He initially found bit parts in silent films. He was usually type-cast as a dark, brooding mysterious figure because of his Anglo-Indian complexion and his heavy-lidded eyes. These parts were generally mystics and Native American warriors. The first paranormal type film he appeared in was 1925's "The Bells." He played a mesmerist. The bit parts were coming fewer and far between and soon Karloff was having to work menial jobs to make ends meet. He was beginning to think that he would never become a star. 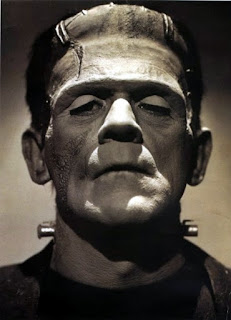 Things started looking up in 1931 when he got a good part in a movie that was nominated for an Academy Award for Best Picture, "Five Star Final." And then came the movie that would make him a star and that was Frankenstein. Universal Studios wanted Bela Lugosi to play the monster in the film. Lugosi had just made the movie "Dracula" a smash hit the year before, taking his stage performance of Dracula to the big screen. Lugosi was offered the part, but in a decision that he would later regret, he passed on it because it was not a speaking part. He also was not interested in having to wear all the make-up that it would take to become the character. The make-up sessions were so brutal, in fact, that Karloff would become one of the founders of the Screen Actors Guild to fight for safe working conditions for actors.

Karloff ended up landing the role of the monster after a chance meeting with the movie's director, James Whale at a studio commissary. He asked Whale if he could do a screen test. Obviously, Whale decided to cast Karloff who was perfect for the part. Karloff worked for weeks with make-up director Jack Pierce refining never before done techniques to bring the monster to life. A brace was made that would force him to walk in an upright and stiff gait. Despite having no speaking parts, Karloff conveys all the emotions and causes the audience to feel empathy for the creature. He would reprise the role in two more movies and he referred to the monster as"the best friend [he] ever had." Fun Fact: Karloff did not get billing in the movie "Frankenstein." The star of the movie was British actor Colin Clive who played Dr. Frankenstein. Mae Clarke played the Bride of Frankenstein and she got second billing. When the Monster characters name came up in the credits, Karloff's name was omitted and there was a question mark in its place. The horror movie roles continued and Karloff played monsters and madmen and became the king of classic horror. Lugosi was always a rival for that position, but Karloff edged him out. The films that followed Frankenstein were "The Mummy" in 1931, "The Mask of Fu Manchu" in 1932, "The Bride of Frankenstein" in 1935, "Isle of the Dead" in 1945 and "The Body Snatcher" in 1945. Karloff finally returned to London in 1933 to make the movie "The Ghoul." He was nervous about seeing his family because he thought they would be ashamed of him. His brother John told him that he better save his money because the acting wouldn't last, but all the siblings were proud of his success and jockeyed for position to be in pictures with him.

It wasn't just horror films that Karloff starred in through the next four decades. He would do drama and comedy as well. He also played the part of Chinese detective Mr. Wong in three features and a heroic doctor wrongly imprisoned on "Devil's Island." In the 1940s, he took Broadway by storm in Arsenic and Old Lace. Karloff earned a Tony nomination for "The Lark" in 1952 playing the part of the bishop who orchestrated the execution of Joan of Arc. And he lent his unique pipes to radio comedies and dramas. He even entranced a new audience of young viewers with his narration in the CBS television special "The Grinch Who Stole Christmas" in 1966. He earned a Grammy nomination for the soundtrack LP. Every Christmas, he dressed as Santa Claus to hand out gifts to children in the hospital over the holidays. He was dedicated to several charities.

His health declined dramatically in the 1960s as emphysema forced him to carry oxygen around with him and he could not stand for long periods. He had married for the first time in 1910. That would end in divorce and he would marry four more times. It was during his fourth marriage to Dorothy Stine that his daughter Sarah was born. Not much is known about his personal life. He was a very private man. He loved cricket and gardening. His daughter Sarah said, "He adored the game of cricket. He thought he had died and gone to heaven when he could go to a five-day cricket match and have smoked salmon and cucumber sandwiches.” The movies he made in the latter part of the 1960s were forgettable and most were low budget horror flicks made in Mexico.

In was in his final decade that he finally settled down in England and lived between his flat in London and his beloved cottage in the countryside, "Roundabout." This cottage is located in Bramshott, England. His health continued to decline and he was hospitalized with pneumonia in 1969. He died from that illness on February 2, 1969 at the age of 81. He was cremated and his remains were buried at Guildford Crematorium Garden of Remembrance. There is no marker. After his death, his illustrated likeness served as the sinister host for the comic book series "Boris Karloff Tales of Mystery" that ran for two decades. In 1997, his depictions of the Monster and the Mummy were commemorated on a U.S. postage stamp series celebrating classic movie creatures. He also was awarded two stars on the Hollywood Walk of Fame for his work in motion pictures and television.

But that was not the end of Boris Karloff. His spirit still seems to remain in the afterlife. Bramshott Village is in Hampshire and this is where Karloff's Roundabout cottage is located. The cottage was given that name because its back is to the road. It was built in the 18th century, probably around 1750. It's two stories and built from red brick with two rooms. His apparition has been seen in the home and any unexplained occurences have been credited with him. But there are claims that the cottage was haunted by a tall dark figure even before Karloff died. Some claim that he moved to this village and this home because of the paranormal activity.

Bramshott Village is considered to be one of the more haunted villages in England and this is for many of the same reasons as Pluckley Village. Battles came through here, as did the Black Death. A large tree in the center of the village was the hanging ground. Karloff's spirit has ventured out into the village as well. Many people claim to have seen him walking on the street and between buildings. Does Boris Karloff still remain in the afterlife? Is he haunting Bramshott Village? That is for you to decide!