Cryotherapy is a one of the latest health crazes. People claim that it reduces pain, helps with weight loss, improves sleep and athletic performance and slows the aging process. The participant steps into a cylindrical chamber that leaves only their head outside of the machine. Then supercooled air is blasted all around the body for 2 to 3 minutes. The feeling is similar to an ice bath. We're not sure if cryotherapy actually has any of the benefits it claims to have, but we do know one thing. It can kill you! Near Halloween of 2015, Chelsea Ake-Salvacion was working at a Las Vegas spa that offered cryptherapy. She decided she would like to enjoy a session after hours. She was alone that evening closing up. She was found frozen to death the following morning by co-workers. She apparently lost consciousness and it was ruled that she died from asphyxia due to low levels of oxygen. Cyrotherapy sounds horrifying to us warm weather gals and freezing oneself solid while trying to administer cold therapy, certainly is odd!

On this day, October 12th, in 1609, the children's nursery rhyme "Three Blind Mice" is published. It was written by a teen-aged Thomas Ravenscroft. Ravenscroft was an English musician who collected folk music. He was a music theorist as well. The rhyme did not become a part of children's literature until 1842. It is believed that the rhyme has historical and political meanings behind it. The catchy tune speaks of three blind mice, which historians believe refers to three Protestant bishops who served during the time of Queen Mary I of England, otherwise known as Bloody Mary. She got that nickname because she executed Protestants. These bishops were Ridley, Latimer and Cranmer and they were burned at the stake. The blindness more than likely refers to the fact that they weren't Catholic and Protestants were considered blind. So that should make it fun to sing-a-long with the kids now! 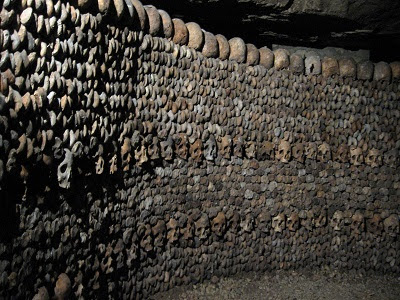 Paris is the City of Lights, but deep in the darkness, beneath the streets, in the underground, lie hundreds of miles of tunnels that make up a vast ossuary for the dead. These tunnels are dangerous and largely unmapped, with pitfalls and areas filled with water and discarded remnants of the dead. One could easily become lost in the maze of stones and bones. These areas are restricted from public access for good reason. Could there be something down there in the Catacombs that is unseen? Are the spirits of the displaced bones now residing within the stones? Is there something evil down in those tunnels? Join us as we share the history and hauntings of the Catacombs of Paris!

Les Carrieres de Paris are more commonly known as The Catacombs. The name technically means quarries and that is what this tunnel system originally was before it was given its macabre purpose. We need to rewind back millions of years to study the history of this tunnel system. Paris and France were covered by a tropical sea millions of years ago. The sea bed was covered with sediment that covered over everything with lime that eventually became limestone. Much of Paris was built with limestone and it was harvested from these quarries beneath the city. The mining began as early as the First Century AD. Structures like the Louvre, the Notre Dame Cathedral and Place de la Concorde were all built from what has been dubbed "Paris Stone."

A few years before the French Revolution, sickness within the city of Paris was killing many people. Poor sanitary conditions, including how the dead were disposed of, led to the outbreak of disease. The cemeteries in Paris were overpopulated and the result was bodies unearthing themselves and improper burials. People who lived near the cemeteries were complaining of the stench and becoming ill. Something needed to be done and King Louis XV issued an edict in 1763 banning burials within the city of Paris. This was not just new burials, it was the past burials as well. The Church was reluctant to desecrate graves and refused to move any bodies. So nothing was done at that time.

Tunnels would be mined until they were completely emptied of the limestone and the quarries would then be abandoned. There were miles of unmapped tunnels beneath the city and the King wanted to make sure to shore up these underground mazes beneath the city. On April 4th in 1777, Louis XVI established the Quarries Inspectorate and made it responsible for the renovation of the tunnels. This fell under the office of the Police Prefect Lieutenant-General Alexandre Lenoir. In 1780, a long and heavy rain caused a wall of the largest and oldest cemetery in Paris, Les Innocents, to cave in completely. The result was hundreds of rotting corpses flowing out of the cemetery into the city. City officials and the Church had no choice, but to find an alternative for the bones.

Lieutenant-General Lenoir supported the idea of using the abandoned tunnels as ossuaries. The macabre task of moving bodies began in 1786 when the former Tombe-Issoire quarries were blessed and consecrated. The bones were moved under the dark of night by parades of black cloaked wagons. It took two years to transfer all the bones from the Les Innocents cemetery. Bones were moved from the other outer cemeteries over the next few decades. New burials were also brought to the tunnels that were now known as the Catacombs. In the beginning, bones were unceremoniously dumped into the tunnels. In 1810, Louis-Étienne Héricart de Thury became head of the Paris Mine Inspection Service and he decided to organize the Catacombs. He implemented stacking bones and skulls along the walls and this same design can be seen today. He also used cemetery memorials to decorate the walls and archways were built.

One of the first visitors was the future King Charles X, who was at the the time Count of Artois in 1787. In 1814, it was felt that the Catacombs were fit to be opened to the public. Many people who came through disrespected the burials and some would take mementos, so it was decided in 1830 to allow only people given special permission to tour the Catacombs. The Church had not been happy with any of the touring going on and in 1833 they demanded that the Catacombs be closed from public view. In 1850, limited visits were opened to the public and those have become more often until our present day, which has almost daily tours that last around 45 minutes. The tour covers less than two miles of the 200 miles of tunnels. Guests are greeted at the entrance with, "Halt, this is the realm of Death!"

Cemeteries are not typically haunted, but the Catacombs are home to so many dead who died in so many horrible ways that it only seems natural that spirits would reside here. People were buried here who had died from sickness and natural death, but others included members of the Swiss Guard killed in the storming of the Tuileries Palace on 10 August 1792.  There was a massacre in September 1792 and those victims were placed in the Catacombs. And there were those killed by the guillotine. They were transferred there from their original burial pits. There were many bones just dumped without ceremony and burials were desecrated. These all make for a perfect storm of paranormal activity.

Legends speak of talking walls within the catacombs. People have ventured beyond the no admittance signs and one urban explorer took a camera with him many years ago. That camera was found laying in a tunnel, but the explorer was nowhere to be seen. The video made it onto TV on the show "Scariest Places on Earth" and features a typical urban exploration video of abandoned tunnels. But the explorer's breathing soon picks up, as does his pace. Soon the video drops to the ground and the explorer is seen running from the camera that tapes until it ran out of tape or battery. There are claims that necromancy and dark black magic rituals have been performed in some of the tunnels. Have they conjured something evil?

Philibert Aspairt was the doorkeeper of the Val-de-Grâce hospital in Paris during the French Revolution. In November of 1793, he decided to venture into the Catacombs to find a hidden stock of liquor. A passage from the hospital led directly to a tunnel of the Catacombs and he used that to enter the ossuary. He carried one candle, which probably lost its light fairly quickly. With a couple hundred miles of serpentine tunnels, it is easy to believe that Philibert became lost. People know that he died down here because eleven years later, his remains were found in one of the galleries and identified by the key ring of the Val-de-Grâce he carried. He also had a bottle of liquor nearby. The tragedy of this was that he was near an exit. He was buried where he was found and his epithet reads:

On the 3rd of November every year, it is said that his ghost appears in the galleries of the Catacombs.

Zak Bagans visited the Catacombs without Ghost Adventures. During his investigation, he caught a female voice talking and laughing. There was also an apparition that appeared as a glowing mist moving away fromone of the cameras. The misty figure appears to be wearing a cloak. People claim to hear voices, feel as though they are being followed and some even claim that something has tried to strangle them. Ghost lights and misty images have been captured on film.

sonybravo on Reddit: My girlfriend went there a few years ago but she was only allowed to go in the safe areas. She said she heard a lot of weird noises and footsteps but was only there for two days. She's not a girl to get scared by the paranormal either. But she told me the tour guide said that if you go past the tourist safety areas then you're on your own. I asked her if there was any serious dangerous areas that you couldn't go to and she said yes there is. I asked would it be wise to go near these points and she said No it's not. You can get lost very easily and if you don't know how to get out you will die down there.

The Catacombs are creepy, but also a great location in which to house the dead. They are protected within these walls. Are some of the spirits of the displaced haunting the Catacombs? Is there something evil that has been conjured here? Could something dark be drawn to this place of so much death? Are the Catacombs of Paris haunted? That is for you to decide!