In January 1941, the Radio Intelligence Division of the Federal Communications Commission picked up the signals from an unauthorized radio inside an apartment building in the Bronx. The FBI was notified and the G-men were on the case. They started investigating stores that sold parts that could be used to build shortwave radios. They found a store in Manhattan whose owner thought that a certain customer had been acting nervous and paranoid. That man was Joseph Klein and he was a German American. He shared his apartment with two other men, one of whom had been a German officer and the other that was a Russian. Both men had become citizens. But their loyalties were not with America. The former officer had been called to Germany and trained as a radio operator and sent back to America as a sleeper. The Russian had been trained in Germany in the sending and receiving of coded messages by radio. The G-men were able to pick up the radio messages sent by the spies, but they could not figure out the code. The Nazis used published books to design their code. In order to crack the code, the G-men would need to find out what book was being used. They had seen one of the spies pick up a book at a Yorkville store, but they did not see the title. The store stamped the inside of its books, so if they could enter the apartment and find the Yorkville book, they would have their code breaker. The G-men's hands were tied. It was illegal for them to enter the apartment without a warrant and a warrant would tip their hands, so they enlisted the services of an unlikely person: a cleaning lady. The woman was very excited to help, but she also was scared because if she was caught, she might be killed. She called the G-men a few days later and told them that she found only one book in the apartment that was stamped by the Yorkville store. It proved to be the key to the code. The G-men continued to collect and decode messages and foiled the Nazi spy ring. The fact that they did it with the help of a cleaning lady is odd!

On this day, December 31st, in 1907, the first ball is dropped to welcome in the year 1908 at Times Square in New York City. Times Square had been the site of New Year’s Eve celebrations since 1904. After the city banned the fireworks display in Times Square, the owner of The New York Times, Alfred Ochs, arranged to have a large illuminated seven-hundred-pound iron and wood ball lowered from the tower flagpole precisely at midnight to signal the end of 1907 and the beginning of 1908. The ball descended 141 feet (43 m) in 60 seconds down a specially designed flagpole, beginning at 11:59 p.m. ET, and resting at midnight to signal the start of the new year. In 1942 and 1943, the glowing Ball was temporarily retired due to the wartime "dimout" of lights in New York City. The crowds who still gathered in Times Square in those years greeted the New Year with a minute of silence followed by chimes ringing out from sound trucks parked at the base of the Times Tower. The current version of the ball features a computerized LED lighting system and an outer surface consisting of triangle-shaped crystal panels. Thanks to satellite technology, a worldwide audience estimated at over one billion people watches the ceremony each year. The lowering of the Ball has become the world's symbolic welcome to the New Year. We wish all of the listeners to History Goes Bump a very happy and healthy New Year! 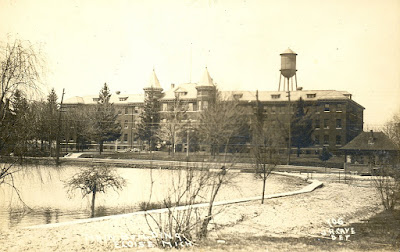 We were joined on the episode today by Bill Clayton. Bill Clayton is a writer from Ann Arbor, Michigan. He's been writing professionally for more than 30 years. He has been the editor for the Michigan Engineer, the magazine published by the University of Michigan College of Engineering. He also writes and edits content for the College of Engineering Web site. He also regularly contributes to a number of magazines and writes about various topics, many dealing with science and he has interviewed celebrities, CEOs and average Joes, but what got our attention is his writing on the ghosts and urban legends of Detroit.

The term asylum brings about many images and most of them are not pleasant. Particularly the asylums of years ago. Today, we know more about mental illness and have better plans for caring for people, but in the past, mentally ill people were treated as cast offs and it was permissable to do horrid things to these people. One of the most notorious asylums in America was Eloise Asylum. Conditions were overcrowded and care was subpar at times. The asylum grew from the origins of a poorhouse to a schoolhouse and post office to a series of buildings built over the years to house the large amount of sick and mentally ill people brought here. Eloise is reputed to be one of the most haunted locations in the Detroit area for good reason. There is also a cemetery nearby named Butler Cemetery that has a reputation for being haunted. Join us as we explore the history and hauntings of the Eloise Asylum.


"By the time I was in my teenage 'I want to be scared' stage, there were only three dilapidated buildings left standing on the hospital side of Michigan Ave. The piggery, cannery and the train depot were left on the farm side of the avenue. My friends and I were very taken with the buildings and had toured them many a late night. We always contained a sense of well being upon entering and though we had seen many cops patrolling the area, they had never seen us and were never caught. Upon entering the first of the many steel doors in the back area of the Old Hospital building itself you could either go directly downstairs or directly up. We chose to go down first. In the ruined basement our flashlights played upon five-foot tall metal crib-like enclosures and a metal straight-backed chair with leather straps on the armrests and legs. Turning and immediate right you faced the morgue, complete with pull out drawers and metal table with leather padding. One other room in the basement we found disturbing; we were never sure what it would have been called. The room was about 8 by 6 and along the left side there was a cell with a swinging door leaving just enough room to walk. Contained in the cell was a metal cot bolted to the wall and a place where the toilet had once been. When the cell door suddenly slammed behind me as I searched I quickly ran out."

Government employees have seen apparitions. One woman claims to have seen a brown haired woman in a window several times. Lights are turned off and on. Disembodied growls and moans are heard. Channel 4 in Detroit joined the Michigan Ghost Hunters Society on a ghost hunt and before it even got dark, they captured an entity in a window. The elevator was uncooperative as if something else were controlling it. Strange orbs of light were captured. Different colors and different sizes.


"Eloise: The Passing of a Friend

When first we met,
She stood tall and proud;
Her family ten thousand strong.
From "A" to "N"
Each blade of grass
Hand clipped, lest it grow too long.
Unfortunately, it is no longer so;
For that, my friend, was two decades ago.

The bingos, the dances,
The movies, the games,
The carnival, when summer came 'round.
The neat tulip beds,
The walks on the lawn --
Group laughter is such a sweet sound.
Unfortunately, it is no longer so;
For that, my friends, was two decades ago.

There were fresh oven smells
From the bakery
Where the bread was far better than all.
Yes, the shops and the store
And the post office, too,
Were there, if you wanted to call.
Unfortunately, it is no longer so;
For that, my friend, was two decades ago.

Can you tell me why
It all worked so well
Back when we first met?
And now weeds replace lawn,
And from dead buildings we feel
The doom that decay begets.
Unfortunately, it is now so;
For I wrote this my friend, but two days ago."

So perhaps the time spent at Eloise Asylum was not always unpleasant. Maybe some former residents find it hard to leave. Have the bad experiences of some patients led to negative energy and hauntings on the property? Bodies have been disturbed and built over. Has this caused spirits to be at unrest? Is the Eloise Asylum haunted? That is for you to decide!

Show Notes:
Bill Clayton's writer's page:   http://www.writers.net/writers/26232
Urban Legends -- The Spirits of Detroit Are Alive and Just Waiting to Be Scared Up
https://drive.google.com/file/d/0BxMyTU4sxDI4YmgxR3hldXA0VUU/view
"Do Einstein's Laws Prove Ghosts Exist?"  http://www.livescience.com/16951-einstein-physics-ghosts-proof.html
Posted by Diane Student at 8:30 AM