White Bluff is a small town with a big legend. In a a famous hollow in this town dwells an entity that has come to be known as the White Screamer. Where this entity originates, no one knows for sure, but it has been seen by many people. The White Screamer appears as a white misty form that wails and screams, which is where it got its name. The screams are enough to drive people insane. The Screamer leaves evidence that it has been in an area by burning the grass and vegetation in the spot where it has ventured. One story around the legend dates back to the 1920s. A young man had built his growing family a home and a farm down in the hollow. Their happiness and peace was broken as each evening they would be awakened by these awful screams and crying. The young man had finally had enough and he grabbed a shotgun as he went out to investigate whatever beast was making this awful noise. He climbed to the top of a hill to see if he could spot the creature. The screams started again, but at a distance and he thought he recognized the voices of his wife and seven children. He climbed down the hill and ran back to his house, but he was too late. He opened the door and found his whole family dead and it was a horrible scene. Their bodies had been ripped apart and pieces of them had been thrown all over the floor. To this day, one can still drive by the hollow and see the foundation of the house and graves of the family members. A white misty creature that is capable of killing is not only terrifying, but odd.

On this day, December 19th, in 1777, General George Washington led 11,000 of his troops into Valley Forge, PA to camp for the winter. At this point, the British has successfully taken Philadelphia and many doubted Washington as a leader. Washington led the men to Valley Forge to rest up and prepare for their next advance once the winter had passed. He had hoped to get fresh supplies, uniforms and foodstuffs before the winter was over, but Congress failed to provide these things to the troops. What followed was what many know as one of the harshest winters in US history. Without fresh boots, many of the men had to bind their frostbitten feet and they feasted on rice and vinegar for that Christmas. Washington wrote to Hamilton, that the men had experienced, "little less that famine" that winter. The war may have ended at Valley Forge, but Washington refused to back down. He made changes in his commanding crew, he upped punishment for those who tried to flee and won the adoration and respect of his men. Even though a plot had been put into place to replace him, the soldiers would not abandon Washington. With the plot foiled and the confidence of Congress behind him, Washington would bring his men out of a frozen hell, and make a push to begin the end of the Revolution. We would be remiss if we didn't mention that today also happens to be Steven's birthday and we are very proud to announce that he is now both our Assistant Producer and our Senior Research Assistant. Happy birthday Steven and thanks for all you do for us! 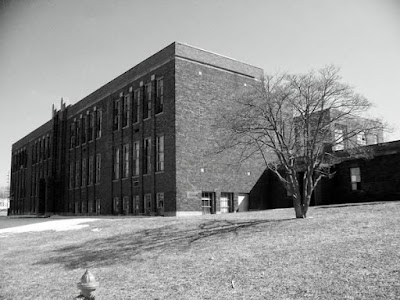 Alton, Illinois is considered one of the most haunted small towns in America. The former Milton Schoolhouse is one of the reasons for this reputation. Many legends surround the school from murdered students to suicide to other deaths that lead people to claim that the currently bustling center of small business is haunted. There are others who believe that the school's reputation for hauntings is just that, a reputation. Join us as we explore the history and hauntings of the Milton Schoolhouse.

Rufus Easton was born in 1774 and he came to be a successful politician, attorney and eventually a postmaster. Easton owned a ferry service which transported travelers across the Mississippi river. In 1818 he settled in a small river town in Illinois. He named this town after his son Alton. The area had originally been settled by the Illiniwek Native Americans. As time passed Alton, IL became a thriving town in shipping and industry. It sat at the convergence of the Mississippi, Missouri, and Illinois rivers and made trade easy in the area. It was officially incorporated as a city in 1837. Alton served as a major station for the Underground Railroad, the seat of the Catholic Diocese between 1857 and 1923, and was the hometown of Miles Davis, the famed jazz musician. It also has a dark spot on its history, as it is the birthplace of the now infamous assassin of Dr. Martin Luther King Jr., James Earl Ray. The reason Alton became so important for the Underground Railroad is because of its proximity to St. Louis. If an escaped slave could get across the Mississippi, he would be well on his way to freedom. Numerous homes had tunnel systems or hiding places in Alton.

In 1904, the Milton Schoolhouse was built. The original parts of the school consisted of four classrooms, restrooms on the ground floor and a boiler room. Two new additions were made to the school in 1930 and 1937. This construction saw the addition of eighteen new classrooms, a gymnasium, and a cafeteria. The school served elementary students and was the main schoolhouse for Alton from 1904 until it was closed in 1986. New school buildings were built to operate within the school system and the Milton School sat abandoned for 4 years. In 1990, a man named Gary Levi purchased the building. A warehouse was added to the building in 1993 and he used it to operate Intaglio/Levay Glass and Giftware company out of. This decorative glass company was housed in the building until 1998. After the glass company was shut down the building sat dormant again, this time for eleven years. In 2009, it was purchased by Meredith Elston who now rents out space in the school to small local businesses. The school now houses a coffee shop, massage parlor, an aromatherapy store, three photography studios, a pet groomer, an electrician and a party bus company. Quite the odd assortment of businesses.

What is most commonly associated with the school building; however, is the hauntings. So much so that the official website for the business park now located in the school states that they like to think of the building as "just having character" and are trying to steer away from people seeing the schoolhouse as quote "and old urban legend." But there are plenty of odd occurrences to go around, most of them hard to ignore.

Over the years, there have been reports of many kinds of activities in the schoolhouse. These vary and include footsteps, shadowy figures in a basement stairwell, a shadow seen peeking out of a second floor window, strange noises in the boiler room and other odd things. Patrick Keller mentioned on his podcast featuring this location that the cellar was very creepy. Exploding boilers killed many people. Did someone lose their life here? Or did something happen on the land?

Ghost Hunters investigated the property. They experienced lights coming on and off by themselves and heard disembodied footsteps. They also heard a disembodied voice shush them. The most commonly reported occurrence of activity over the last 60 years revolves around the haunting of the school by a young girl named Mary and possibly also the spirit of the twisted man who would be her killer. Just a warning, the story that follows is disturbing and if you listen with young children, you may want to save this for later.

According to legend, school had dismissed for the day on a fall afternoon. Everyone had gone home except for a girl who was working on a seasonal bulletin board for her class. Over the years, students and storytellers have given this girl the name Mary. When she finished working on the board, it had begun to get dark, as the days were now shorter, and she gathered her things and headed for the doors by the gymnasium. As she reached the doors, the story says there was a noise behind her which she turned to look at. Mary's body was discovered the next day in a shower stall in the locker rooms next to the gymnasium. The young girl was found with her clothes torn, bloody and bruised. She had also been violently raped. Bloody flesh was found underneath her fingernails and people were on the lookout for someone who had been scratched or cut. After a few days, it was noted that the school janitor had not shown up for work. Upon investigating, he and his mother claimed he had been sick with the flu for those days and could not attend work. They found scratches on both of his hands, which he claimed his cat had left, and with no evidence to arrest him, they left. A few days after this, the body of the janitor was found hanging in the school. Some have speculated that it was the pressure and harassment of the police which led him to take his life, but the legend says he was found with a note scrawled near him which simply stated "I did it". Though this seems like a pretty solid confession, the murder case was never solved.

For years following this, children claimed to have encounters with strange figures, hear sounds all around the school and the name Mary floated through the halls like a secret word on the tips of everyone's tongue.  When Intaglio Design took over the building, employees claimed to see the apparition of a small girl while working there. They claimed to find glass items shattered near a specific shower stall in the previous locker room. There was even one employee who claimed the apparition of the young girl became very attached to her. Her office was located by a stair well outside of the gymnasium. An apparition of a young girl was often seen in her office, out of the corner of her eye in other rooms, and was even reported to have typed on the computer when no one else could have possibly been in her office. Little X's and O's were left behind on the screen. This employee grew attached to the spirit of the little girl. Over the years, she claimed another spirit was in the school as well. This one, she said, was threatening. Other employees felt short of breath and panicked in the area surrounding the girls shower room and even supported the story that they had seen the office employee terrorized by a spirit in a hallway. The woman eventually left her job and refused to return to the building. A few years later, it was shut down again, until the purchase in 2009.

The story of Mary seems to lack a lot of physical evidence and many chalk it up to an urban legend, but something seems to be causing activity at the school. Is this just another piece of folklore which has permeated the society in Alton, IL? Was the girl known as Mary really killed there and stays behind to wander the halls of her old elementary school? Is the Milton Schoolhouse haunted? That is for you to decide.
Posted by Diane Student at 7:59 AM