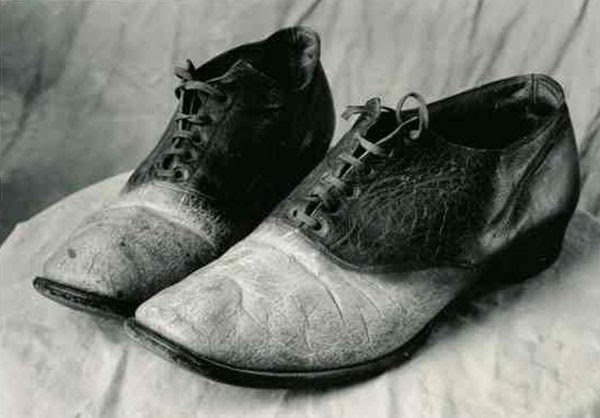 Outlaws and the Old West go hand in hand.  One such outlaw could be found in the Wyoming territory and he went by the name Big Nose George Parrett because he had...well...a big nose.  So large in fact, that when it came time to bury him in his coffin he wouldn't fit until several men pushed down upon the pine lid.  Dr. John Osborne claimed the body of Big Nose George and decided to use his body for study, particularly his brain since he thought that George was criminally insane.  The good doctor's wife had been committed for being criminally insane and he thought studying Big Nose George's brain would help him find a cure.  In the end, many people might consider Dr. Osborne the insane one because of what he did with George's body.  The doctor removed skin from George's chest and legs and then had it sent to a tannery with orders to create a pair of shoes from the skin.  Dr. Osborne wore his shoes proudly.  As a matter of fact, they were on his feet at his Inaugural Ball in 1893 when he became governor of the state of Wyoming.  The good doctor also went on to become assistant Secretary of State under President Wilson.  The shoes still exist to this day and can be seen in their new home at the Carbon County Museum in Rawlins, Wyoming.  Shoes made from the skin of an outlaw certainly strikes me as quite odd.

On this day, October 18th, in 1945 the trials against World War II war criminals begin in Nuremberg, Germany.  Nuremberg was chosen as the site for the trials because it was considered the birthplace of the Nazi Party since it held propaganda rallies there and the Reichstag Nuremberg Laws were passed there.  Those laws were the anti-semitic laws that led to the destruction of Jewish businesses and finally the round up of Jewish people.  The trials were conducted before an International Military Tribunal and by October 1st, 1946, twenty-two war criminals had been tried.  Twelve of those convicted were sentenced to death, among them were Reich Marshall Hermann Göring, Julius Streicher, Hans Frank and Alfred Rosenberg. Three others that were convicted were sentenced to life imprisonment and four other convictions led to prison terms ranging from 10 to 20 years. Three men were acquitted.  The war crimes they were accused of ranged from enslavement to persecution to murder and to extermination.  One other man was tried in absentia and that was Martin Bormann.  Other war criminals who were not tried because they had committed suicide before the trials were Robert Ley, Heinrich Himmler, Joseph Goebbels and, of course, Adolph Hitler. 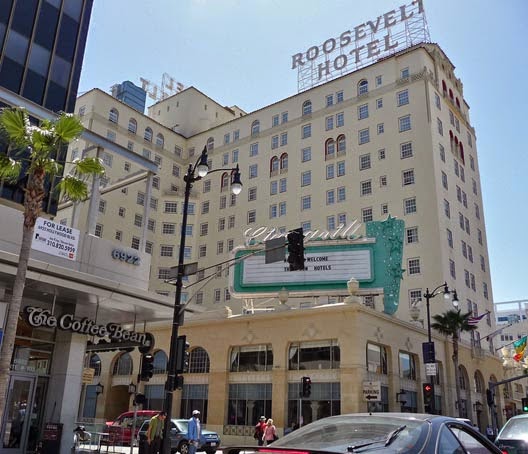 The Hollywood Roosevelt Hotel is located in downtown Hollywood at 7000 Hollywood Boulevard.  The architecture of the hotel is in the Spanish Colonial Revival Style featuring rounded Moorish windows and wrought iron chandelier and lights with a giant lighted sign atop the edifice.  The architects were Fisher, Lake & Traver, a short-lived architectural firm that also designed the Stillwell Apartments in Long Beach and the Phoenix Westward Ho Hotel.  If the name of the hotel makes you think of a president, that would make sense because the hotel is named for President Teddy Roosevelt.  Stalwarts of the Hollywood community financed the building of the hotel and included Mary Pickford, Louis B. Mayer, Sid Grauman and Douglas Fairbanks.  The hotel climbed to twelve stories and featured 300 rooms when it was finished and it officially opened on May 15th, 1927.  The Grand Opening was celebrated with several celebrities from Charlie Chaplin to Will Rogers to Greta Garbo.

The Roosevelt fell into decline in the 1950s and a new owner remodelled, painting the hotel a horrid seafoam green and demolishing the historic archways.  The beautiful painted ceilings were also covered.  The wrecking ball came calling in the 1980s, but the Radisson bought the building and attempted to restore the Roosevelt to its former glory using historic photographs for guidance and they did a good job.  Thompson Hotels later bought the Roosevelt and they manage it to this day.  Parts of the Walk of Fame line the outside of the hotel and the building beckons visitors to enter and transport back to the Golden Age of Hollywood.  The hotel features vintage bowling lanes, an Olympic size pool with a David Hockney mural painted on the bottom, live theatre and the Tropicana Bar.  Unfortunately, the hotel has been extensively renovated and modernized by Thompson Hotels, which makes it perfectly comfortable for the modern era, but most certainly has lost a bit of its glitzy charm.  Despite the interior renovations, the Roosevelt Hotel is one of the few historic treasures remaining in this area, along with the Chinese Theater that is a block to the east and the El Capitan Theater that stands on Hollywood Boulevard as well.

The grand Blossom Ballroom of the Roosevelt hosted the very first Academy Awards in 1929 and it was banquet style.  Thirteen statuettes were handed out by Al Jolson and Douglas Fairbanks and the entire ceremony lasted a mere five minutes.  This was the only time the Oscars were hosted at the hotel because it was not large enough for later ceremonies.

One of the hotel's most famous guests practically made the Roosevelt Hotel her home.  Marilyn 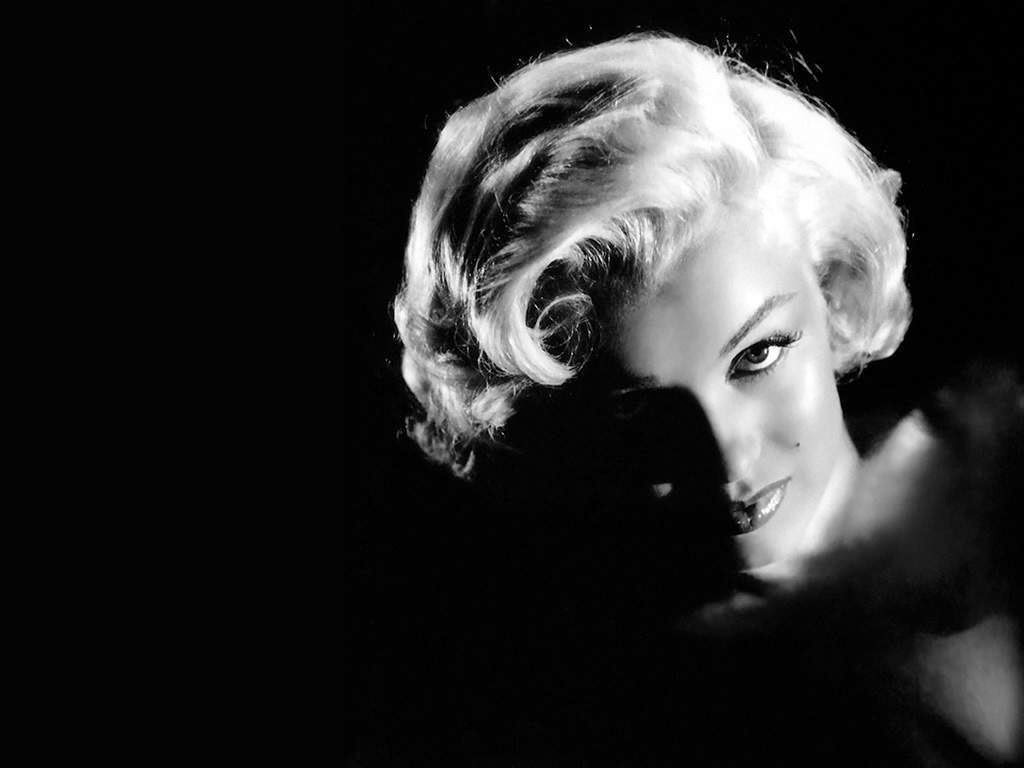 Monroe lived in a poolside suite for two years after her star began to rise.  She had begun as a model and that career started to take off just as she found herself newly single having gone through her first divorce of...well...many.  Thus she made the hotel home and enjoyed sitting in a dark corner booth at the Cinegrill, which is named Teddy's today. The room was the largest and best in the hotel and that suite is now named for her.  Marilyn also posed for her first ad ever - an ad for suntan lotion - on the hotel pool's diving board.

Other famous people would make the Roosevelt Hotel home as well.  Clark Gable and Carole Lombard lived in a penthouse there and that penthouse is now named for them.  Along with the name change came a price change.  A penthouse that Gable paid $5 a night for now runs a whopping $3,500 a night!  Montgomery Clift lived at the Roosevelt during the filming of "From Here to Eternity" and paced the hallways of the ninth floor as he memorized his lines.

You may know Errol Flynn as Robin Hood, but did you know him as a bathtub ginner as well?  The Roosevelt had a barber shop and Flynn used a back room there to brew his famous gin recipe.  And if you have seen The Little Colonel starring Shirley Temple, you may recall the fabulous tap dancing routine she does with Bill "Bojangles" Robinson in the film.  They practiced that routine in the Roosevelt Hotel on the stairs between the ballroom and the lobby.

With so much activity and so many famous people coming and going throughout the years, one would imagine that the Hollywood Roosevelt Hotel is haunted and it reportedly does host a few specters.  As mentioned before, Montgomery Clift had stayed on the ninth floor and paced the hallways.  Apparently, his spirit liked the hotel so much, that he has returned and can be seen pacing the floor and also practicing his trumpet.  Room 928 had been his room and people report feeling cold spots in the room and both maids and guests have been touched in that room.

A mirror that had once been in Marilyn Monroe's Suite was moved to a wall in the lower elevator foyer.  People claimed to see the reflection of Monroe in the mirror.  Recently, the mirror was moved into storage.  Monroe is not stuck to just haunting her old mirror though.  She has been seen and felt in her suite, which was room 246.  She also has appeared in the Cine Grill and the scent of her perfume lingers.

Carole Lombarde has been seen hanging around the penthouse she once shared with Clark Gable.

A couple of non celebrity ghosts hang out in the Blossom Room.  Psychics claim a nervous man in a tuxedo resides in there on occasion and also another man in a white suit has been seen near and playing the piano.  Piano music has been heard coming from the room when no one is there as well.

Unseen entities occasionally take a dip in the pool.  The website http://haunted houses.com reports: "Security guards have seen ghosts take a late night, early morning swim in the pool. One such ghostly resident decided to do so at 3 AM in the morning, to beat the crowds. While the security cameras picked up his image in the pool, when a security guard went down to investigate, he communicated through walkie-talkie that no one was there. Waving his hands at the camera. However, on the security camera, the guard was waving his hands right through the apparition's head!"

Poltergeist activity abounds with mysterious calls coming into the switchboard in the lobby from empty rooms.  Rooms are locked and unlocked on guests.  Disembodied voices are heard in various rooms as well.  A ghost that takes on the appearance of a little girl calling herself "Caroline" has been seen by hotel staff skipping about the lobby and some guests have seen her in hallways.

So is the Hollywood Roosevelt Hotel still playing home to celebrity guests who died long ago?  Are ghosts creeping around the place?  That is for you to decide.

Cult of Weird provided the skin shoe story on today's episode and you can find more details on that here:   http://www.cultofweird.com/death/human-skin-shoes/
Posted by Diane Student at 3:15 AM