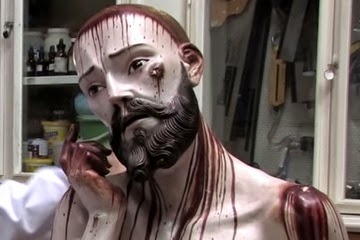 Statues made to honour or represent Jesus Christ are a dime a dozen.  There are probably millions around the world if someone were to count.  But we imagine that a Jesus statue sporting real human teeth is quite unique…and creepy!  The Christ of Patience statue is located in a small Mexican town and has been there for 300 years.  The statue was sculpted to depict Jesus before his crucifixion, with a sad expression and blood running down his body.  It was a standard tradition several centuries ago for human body parts to be donated to churches as well as hair.  The definition of creepy to me is a statue with human hair.  The Christ of Patience was taken in for restoration and the teeth were discovered complete with roots.  Whose teeth they are, nobody knows, but it seems strange that someone would donate teeth particularly when one notices that the Christ statue’s mouth is barely open.  Are they from different people who volunteered to have teeth pulled or were these teeth possibly from someone who was not a willing donor?  We’ll never know, but that statue is quite odd.

Doane Robinson was a historian from the state of South Dakota.  He wanted to find a way to attract tourists to his state and he came up with a MONUMENTAL idea.  The Black Hills National Forest was already a tourist destination and Robinson decided that placing the faces of some American presidents on the side of a mountain in the Black Hills would be the perfect tourist draw.  He hired sculptor Gutzon Borylum to accomplish the task.  That task began on this day, October 4th, in 1927.  George Washington was the first face carved into the mountain and was completed in 1934.  President Thomas Jefferson followed, but things did not go as well.  The facade cracked and so he had to be restarted on the other side of Washington.  President Abraham Lincoln followed and then finally President Teddy Roosevelt.  The project was completed in 1939 at a cost of $1 million.

The Stanley Theatre in Utica, NY

The Stanley Theatre opened in Utica, New York after thirteen months of construction, on Sept. 10th, 1928.  The theatre was designed originally as a grand movie palace with seating for over 2900 people.  Architect Thomas Lamb designed the theatre and the architecture style is most often referred to as Mexican Baroque, but the theatre really is a hodge podge of Spanish Baroque, Indian, Middle Eastern and Art Deco.  The marquee has always been something to behold as it juts out impressively to greet visitors with glowing lights and large lettering.  The exterior of the building is covered in terra cotta and tiled mosaic.  Upon entering, there is no missing the impressive grand staircase that rises from the lobby to the Mezzanine.  The staircase 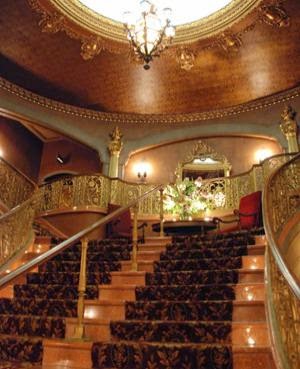 looks familiar and recognition brings a bit of melancholy, for this staircase is designed exactly like the Titanic’s grand staircase.  The rest of the interior of the theatre is glorious and ornate with gold leaf, gold columns, marble lions, gilded cherubs and twinkling stars lodged into the pink hued domed ceiling.

The theatre was named for Stanley Mastbaum, one of the Mastbaum brothers.  The brothers owned a chain of theatres under the Stanley-Mark Strand Corporation.  Three days before the Stanley Theatre opened, Warner Brothers bought out the chain and took ownership of the Stanley under the Warner Brothers Circuit Management Corp.  On opening night, the silent movie “Ramona” starring Dolores del Rio played.

The theatre was a spectacular place to see the latest releases coming out of Hollywood and she had a great run until the 1970s.  The 70s saw the theatre fall out of use and into disrepair and she closed her doors at the beginning of the decade.  Restoration efforts began in 1974 and have not ceased.  Everything has been replaced and restored and things like electrical have been updated.  The name has changed to the Stanley Center for the Arts and now features off Broadway shows, concerts, opera and ballet.

As is the case with many older theatres in America, when the curtain falls on the stage and the lights are 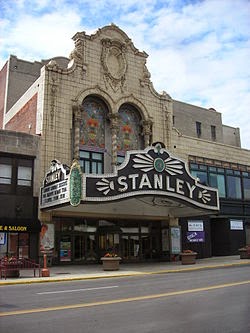 dimmed, not all activity ceases.  The Stanley has its own set of bumps in the night.  In particular, there is a row of seats – 101 to 113 – that are purported to be haunted.  There are tales of one seat in that row that leaves patrons who sit in it feeling bewildered and scared as they are either sat upon or forced from the seat.  Rumor is that the theatre will not sell tickets for that seat or any seat in the row, but some claim that is urban legend.  As for the theatre, they will not reveal which seat is haunted, nor if they in fact do not sell tickets for certain seats.  Reports of shadows and footsteps abound.

Ghost Seekers of Central New York has investigated the theatre on several occasions as the only paranormal group allowed to do so and they claim to have captured orbs and strange mists on camera and video.  The balcony seating area by Exit 5 seemed to have a large cold spot that was felt by several people.  Also in the balcony area, near Exit 3, an entity seemed to manifest.  Patrons of the theatre claim to have felt the presence of something in the ladies’ restroom.  The Ghost Seekers seemed to validate this claim when they caught a shadowy figure floating towards that restroom.

Posted by Diane Student at 6:12 AM