The Five Fisherman and Titanic

Before the sun rose on the morning of April 15th, 1912, the grand "unsinkable" RMS Titanic sunk after sideswiping an iceburg.  The collision punched holes in five of the sixteen watertight compartments causing the ship to take on more water than it was built to handle.  More than 1500 people met their final fate that morning in the icy waters of the North Atlantic Ocean.  In the aftermath, rescue ships were sent to recover the bodies of the dead: CS Mackay-Bennett from Halifax, Nova Scotia, the cable ship Minia, lighthouse supply ship Montmagny and sealing vessel Algerine.  The ships carried embalming supplies, but not nearly as much as was needed and many bodies, particularly those of third class passengers, were buried at sea.

On April 30th, 1912, the Cable Ship Mackay-Bennett arrived in Halifax carrying 190 bodies recovered from the Titanic sink area.  A curling rink was set up as a temporary morgue since the ice would help keep the bodies cold until they could be identified.  Two thirds of the victims were successfully identified and the rest were given numbers.  Many of the people were buried in cemeteries in Halifax.

On board the CS Mackay-Bennett was embalmer John Snow.  He owned a funeral parlor in Halifax and several victims were taken there rather than to the curling rink.  The building was a two story wood and stone building on Argyle Street and  John Snow and Co. Funeral Home hung on a sign outside the building.  Several coffins were hoisted up to a second floor room, one holding John Jacob Astor IV, and there they sat until burial.

Today the John Snow Funeral Home is a wonderful restaurant named The Five Fisherman.  And that second floor room that housed the Titanic victims is a wine room. 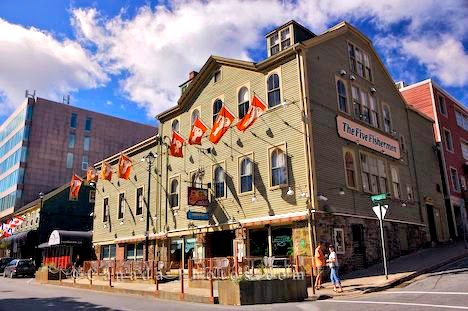 Some claim that the victims never actually left the funeral home and still haunt the location.  And some claim that more than just the Titanic's victims are there.  The building was originally built in 1816 by St. Paul's Church of England as a public school and it later became the Halifax Victorian School of Art before the funeral home.  As a side note, Anna Leonowens who opened the art school was THE infamous Anna of The King and I story.  While the mortuary was located on the site, it not only housed the Titanic victims, but also those of the Halifax Explosion.  Not to mention the numbers of people who died in Halifax during those years.

Apparitions and ghostly fogs are seen on occasion.  Poltergeist activity is reported by restaurant staff with everything from moving chairs and tables to flying glasses.  There are also knocking noises and disembodied footsteps.  Sinks turn off and on without assistance.  Disembodied voices are heard and cold spots are felt.  The Captain's Quarters behind the salad bar features an arguing couple on occasion.  Ask a staff member and you are sure to hear an experience story.  Several stories are chronicled at The Five Fisherman website.

So The Five Fisherman is a great place for seafood and...the unseen.

Posted by Diane Student at 9:10 PM