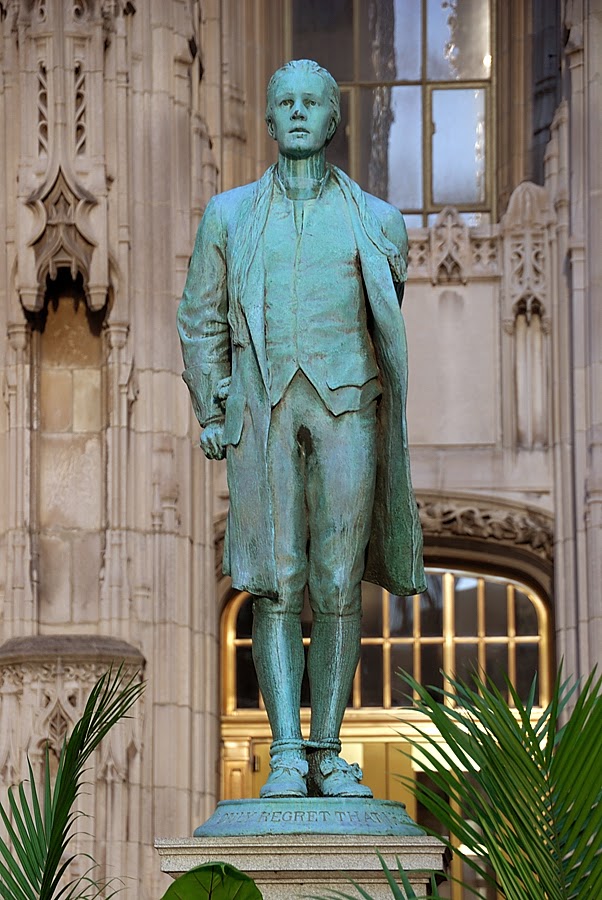 Nathan Hale, a Captain in the Revolutionary War, was born in the year 1755 in Coventry, Conneticut.  He was born in the obscure position of sixth child among twelve total children that were born to Richard and Elizabeth Hale, but would rise to the level of infamy as an American hero.  Nathan Hale attended Yale College, graduating with honors, and then moved on to become a teacher.  His belief in equality led him to argue for the education of women and he began teaching early morning classes to a handful of females.  He held some strong beliefs about independence as well.

On April 19th, 1775, the Battle of Lexington erupted and Nathan Hale turned from his teaching to battle.  He had registered with the militia, although he was not of age, and at a town meeting he declared, “Let us march immediately and never lay down our arms until we obtain our independence.”  Hale was commissioned as First Lieutenant over the Seventh Connecticut regiment and his regiment helped General George Washington to win several battles.  In 1776, Hale became ill and was unable to fight for some time.  When he returned to duty, he attended a meeting that was held for the purpose of recruiting spies for General Washington.  No men stepped forward save for Nathan Hale.  He saw the opportunity as his chance to serve again since he was still weak from his illness.

Nathan Hale left for New York in the guise of a schoolmaster looking for a position.  He spent two weeks conducting his mission, which would come to a terrible end.  On September 20th, Hale flagged a ship he assumed to be an American ship.  The ship was actually a British frigate and Hale was captured.  When the British searched him, they found incriminating papers hidden in the soles of his shoes.  There was no trial and Hale was condemned to die by hanging the following morning.  Before he was hung, Hale made the statement that is still famous today.  He was asked if he had a confession to make and he answered, "I only regret that I have but one life to lose for my country."  He died at the young age of twenty-one.  There is some dispute as to the present day location of the hanging and the body of Hale was never returned to his family.  His family erected an empty tomb in his honor in Nathan Hale Cemetery in South Coventry, Connecticut. 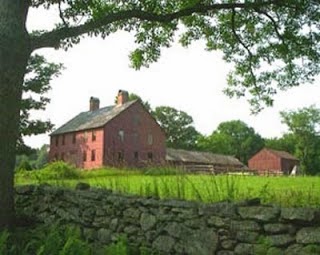 that now stands on the property in Coventry, Connecticut.  The large farmhouse sits on several acres and was registered with the National Register of Historic Places in 1970.  It continues to host tours to this day.  Nathan Hale did live on the property in a home that was brought down to make room for the new home.  A trunk of Hale's belongings was retrieved by his brother and is located inside the home.  The home was lived in by several other families after the Hales and fell into disrepair.  A lawyer named George Dudley Seymour bought the home and restored it, filling it with antiques and Hale's trunk.

As with many old properties, the Nathan Hale Homestead has tales of hauntings.  Seymour himself claimed to see the spirit of Nathan Hale's father, Deacon Richard Hale, sitting inside the house in colonial attire.  Hale's brothers Joseph and John have reportedly been seen as well as John's wife.  Joseph is heard more than he is seen, purportedly rattling chains like the ones the British kept him in while he was on a British prison ship.  A servant of the Hale family named Lydia Carpenter is also reported to be spending the afterlife at the homestead, still cleaning and listening for gossip!  Musket shots have been heard in the woods that surround the property, as well as footsteps.  The Syfy Channel's Ghost Hunters has investigated the property.  For Halloween, the homestead not only hosts a haunted corn maze, but also a candlelight tour of the home complete with ghost tales.

Posted by Diane Student at 7:24 PM