The Gates Of Hell In Denver

Siri is a virtual assistant for the iPhone by Apple.  A recent date has caused much speculation on the Internet because of the information that Siri provided about that date.  That specific date was July 27, 2014.  An iPhone user can ask Siri about certain dates to see if any special holidays or occasions land on that date.  July 27th had a diabolical answer.  Siri informed users that July 27, 2014 was the opening of the Gates of Hell.  While some people speculated that this date was a coded message about a coming apocalypse, Siri was more than likely referring to China's Ghost Month.  During the seventh month of the lunar cycle, Chinese legend claims that the gates of heaven and hell both open.  While that brings comfort, one must ask if there are actually gates to hell and if they could be opened at various times.  Most paranormal researchers claim that there are vortexes that help the dead and demons cross over to the living.  Could vortexes be some kind of gate?  Whatever the truth may be, there are stories of a gate to hell in Denver, Colorado. 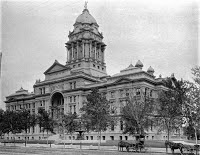 The first county in Colorado was named Arapahoe County in honor of the Arapahoe Native American Tribe that had once occupied the area.  The Cheyenne also lived in the area.  Originally, the county was part of the Kansas Territory, but when Kansas became a state, Arapahoe County became the Colorado Territory along with sixteen other counties.  William Green Russell brought a group of Georgians to the area, following word that there was gold to be had.  The Russell Party established themselves where the South Platte and Cherry Creek joined and this first claim jump became the city of Denver.  Denver was a rough and tumble place known for gunfights and saw its share of fires and floods.

Law and order is needed in a town and eventually the Arapahoe County Courthouse was built.  The Courthouse was designed by Harry Mellon Rhoads and its cornerstone was laid on June 24,1881.  Construction was finished in 1883.  The Courthouse served as the seat of government for Arapahoe County and Denver.  It was a grand building built from stone with classical elements like entablature, copper domed roofs, and a Renaissance style cupola.  Unfortunately, it became obsolete when Denver and Adams County were formed and was demolished in 1933.

As happens so many times to wonderful old buildings, this one was replaced with a park that soon became nothing more than a parking lot.  In 1957, a new structure with a peculiar design called a hyperbolic parabaloid was built on the spot.  The structure encompassed an ice skating rink and a May D&F department store.  It was the perfect style for the Fifties, but in the late 1990s Denver decided to move on to other things and the area was demolished once again to make room for a hotel that is currently the Sheraton Denver Downtown Hotel.

But something is not right with the land there.  The first indication of this came in 1900.  On the second floor of the courthouse, a guard and a janitor were working.  At around 3am, the men witnessed the opening of what they called the "Gates of Hell."  It was actually the elevator opening, but the catch was that the doors opened by themselves and a distinct smell of brimstone could be detected.  This happened many times and tales of peculiar lights along with the smell were told.  Apparitions of the departed were seen and some were recognized as well.

To be sure, many countries around the world claim to have their gateway into hell, one place in Turkey even has a fire burning within it that has raged for over thirty years.  But this story in Denver is unique with its tales of brimstone odor.  Did the elevator at the old courthouse really ferry the dead back and forth?  Could the Denver Sheraton be haunted due to its location?  Who knows.
Posted by Diane Student at 10:03 PM