In Oak Creek Cemetery in Battle Creek, Michigan there is a statue of the Virgin Mary that stands at the family plot where Johannes Decker was buried. She is believed to have committed suicide or one tale claims that she killed her children and herself. Her eternal punishment is to weep throughout eternity. Those tears seem to come from the Virgin Mary statue. She is called Crying Mary and many people claim that when they touch the visage of the statue, it is damp with tears. This supposedly happens on Sunday evenings at midnight. The statue during the day does appear to have the tracks of tear stains. Linda Godfrey, who covers Weird Michigan among other things, claims that it was not just something that occurred on Sunday nights. She claims that tears ran down the face anytime they visited. This happens regardless of what the weather is like and the tears seem to flow, so that it could not be dew causing it. To us, the statue looks more like a Greek or Roman goddess rather than the Virgin Mary, but that is what legends are all about. The idea that a statue could actually weep certainly is odd!

This Day in History - Winnie Ruth Judd
by Rachel Hore

On this day, October 27th, in 1939, a murderess named Winnie Ruth Judd,  was reported to have escaped from an insane asylum in Arizona. Winnie had been a nurse, but got involved in drugs. She attended a wild party with two other women she knew through her nursing position, Agnes Leroi and Hedvig Samualson. In a drug fueled fit of passion and jealousy, she shot both women dead. After killing them she dismembered them and placed them in two suitcases, intending to travel on the train with the corpses. How she planned to hoist two dead bodies around is a mystery. The bodies were discovered when blood seeped through the suitcases onto the ground. Winnie Ruth Judd was a repeat escapee from the asylum and through her manic intelligence she managed to evade the police. On this occasion she did finally turn herself in to the cops. 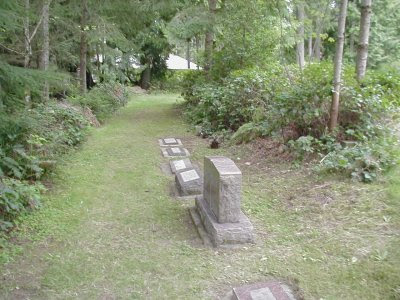 Cemeteries have always carried a mystique about them and many people expect them to be haunted. For the most part, cemeteries are very peaceful places. After all, why would the dead want to hang out with the dead? Most haunted cemetery stories consist of an apparition returning to their plot or a hitchhiking ghost being dropped off outside of a cemetery. But Maltby Cemetery is different. Rumors of Satanism and thirteen steps to Hell have given this cemetery quite the reputation. Is it just a place where teenagers go to hang out and drink and act stupid or is there truth to the legends? Join us as we explore Maltby Cemetery!

Maltby Cemetery is located in Paradise Valley near Maltby, Washington. The town of Maltby was first settled in 1887 and was named for real estate developer Robert Maltby. The cemetery is sometimes referred to as the Paradise Valley Cemetery. It contains the plots of some of the original homestead families to come to the area. The first burial was in 1908 of Henry Davis and the bulk of the burials belong to the Doolittle family. The last burial took place in 1985. The cemetery was restored in the 1990s and the land around it developed. The cemetery is on private property and hard to reach, but very well maintained and seems to be a nice peaceful spot, but the legend that has developed around this graveyard is anything but serene.

The legend claims that there was a gate here called the Gates or Pillars of Hell and that there are thirteen stairs that began at ground level and went down underground, so that people could see into the crypt at the bottom. The plot had belonged to a wealthy family. The legend includes information that this family practiced Occultism and Satanism. People who travel down the stairs claim that all sound dissipates and they are surrounded in silence. As they travel further down the steps, their lives seem to flash before their eyes and when they turn around at the bottom, they see themselves in Hell. It is a horrific vision. The people who would witness someone travel down the stairs say that they would see the person stop at the bottom, turn around and then collapse in horror. Rumors maintain that several teenagers were carried out comatose and that they never did recover. Some witnesses claim that people disappear as they get further down the stairs.

From what we have pieced together, the steps are more like concrete slabs that are on the side of a hill and may not actually exist anymore. Supposedly they were bulldozed or filled in with cement. The cemetery had become a place for teenagers to party and trash and so it would be easy to believe that the private property owners would want to get rid of anything that would attract idiots. And anyone who wrecks a cemetery is an idiot. Many people who attempt to visit now are unable to even find any stairs. We did watch a video of some people trespassing at night and there is the sound of moaning that is creepy. We're not going to post the video because we don't believe in trespassing, but if you google it, you'll find it.

Some visitors claim that the gravestones themselves change. They seem to get larger over time. One in particular becomes an ornate, impressive giant. There are claims that there is a place here called The Den and was just after the front gates or in a nearby woods. It is said to be a portal protected by magic and that anyone who tries to enter will go mad. The cemetery also has its own ghosts. There is the ghost of a mother looking for her child and a mother and child ghost who appear poor and unwell. There is also the sound of whispering and orbs floating through the gravestones. There are also reports of ghosts attacking visitors to the cemetery.


"Back in 1983 our Friday nights were , get beer and go someplace to drink. The place of the night was Maltby. We had heard all the stories and I have had my share of ( sightings ) . If you are open to the other side, you are more prone to be effected by it. I didn't feel good about going to this place, gut feeling. And I'm not one to get scared, I'm the one jumping into anything to check it out. But not this time. As the guys drank there beer and my girlfriend and I stayed in the van, it was apparent they meant to freak us out. They dared us to cross the metal pillars. Anyone that has been there knows what I'm talking about. On that note, we agreed. My girlfriend and I held hands, said a prayer and took three steps in past ( the gates to hell ) which was as simple as walking past the two pillars. How hard could that be ? Wrong. the air turned very misty, all sound was gone. We didn't hear a thing. At the same time without saying a word we turned to see the guys, they were yelling we could tell but we couldn't hear a word they were saying, we than heard noises from the grave sites to our left, at that point we both took off to run out, and like the movies, our feet wiped out and we hit the mud and beings as scared as we were and so close to the pillars we didn't even bother trying to stand we crawled back past the pillars. The moment we passed back, there was sound to the air and we heard the guys. We got up and ran to the van and insisted leaving ASAP.We couldn't at the time tell them what we felt, but it was clear they didn't have anything to do with it. I have never felt such evil before nor do I ever want to. I grew up with ghosts in our home but not like that. There have been many people that traveled to that place, it was the ( High School ) thing to do. Some people felt what we did, some just had a good time and didn't see or feel anything. But the fact is, its a very evil place. From the minute you leave the main road to go up the gravel, its not a good place. I never went back, but heard they have cleaned it up a lot, repaired it, ( its not the same ) there were stories they had many spirit guides try to put the souls to rest. There were cars that were said to have been chased out of there by devil worshipers and crashed on the hillside. The story is you could still hear them screaming if you listened. That I didn't sit around to hear. But they were said to have taken the cars out years ago. Not going back to find out!"

Another tale recounts, "My girlfriend and I wanted to see this for ourselves. You have to go down those thirteen steps and then you see a little chair. If you sit in the chair, it automatically mean that you have sold your soul to the Devil. It sounds really creepy. I was at church with my friend and his pastor said that he went there when he was sixteen and it was the worst experience of his life."

Another personal anecdote goes, “A group of us headed out to the cemetery in Maltby. We made sure we got there as close to midnight as possible. After about an hour of searching around in the dark, we finally found it. The 13 steps. In the moonlight, you couldn’t see the bottom. We tried using a flashlight and we still could not see the bottom. It was frightening and one of the girls was so freaked out that she couldn’t even look down into the staircase. I decided I was going to go for it, but as I walked down the first two steps, I started to feel a sick. After the next two steps, I felt light-headed. When I got to the sixth step, I became so cold that I could barely breathe and I could hear muffled yelling and screaming. I was not going any further. I couldn’t even take the next step. When I turned to climb back up, I could feel something pushing on my back and I couldn’t see out up to my friends clearly. When I finally reached the top of the staircase, I realized the yelling and screaming was coming from my friends. They were screaming that I had disappeared when I went down. I am six feet tall. I couldn’t have been out of sight after having only gone down halfway down. Needless to say, we were all completely freaked out and got out of there as quickly as possible. To this day, every now and then, I dream about the 13 steps that lead down to hell and I always wake up in a cold sweat.”

Is Maltby Cemetery just a nice peaceful cemetery off in the woods or is it really an area permeated with mysticism? Do the spirits of those buried here wander among the tombstones? Is Maltby Cemetery haunted? That is for you to decide!
Posted by Diane Student at 6:40 AM