Moment in Oddity - The Legend of Catherine's Hill

On the Black Woods Road of Maine originates the tale of a female spectre. When the sun is setting and fog rolls in, many people claim to see the spirit of a decapitated woman named Catherine stalking the road between Franklin and Cherryfield on Route 182. The story of how Catherine lost her head involves a car accident. Or possibly a carriage accident. You see, the legend of Catherine's Hill has many different tellings depending on the decade and the storyteller. People are warned to respect the space where the spectre is seen and are directed to not take anything home with them. If a passerby should see Catherine on the side of the road, they must attempt to pick her up or she will curse them. It is said that one young man sped past the apparition and when he looked in his rearview mirror, he saw Catherine sitting in his back seat. He ended up crashing his car and dying. How do people know he saw Catherine? Well, that is what legends are all about after all. Many people claim to feel a presence and one TV reporter who visited the area for a story remarked that something was pressed against her back the whole time. Now that certainly is odd.

This Day in History - The Charge of the Light Brigade

Cannon to right of them,
Cannon to left of them,
Cannon in front of them
Volley'd and thunder'd;
Storm'd at with shot and shell,
Boldly they rode and well,
Into the jaws of Death,
Into the mouth of Hell
Rode the six hundred.
The Light Brigade was a British Calvary made up of the 13th Light Dragoons, 4th Light Dragoons, 17th Lancers, 8th Hussars and 11th Hussars. They were facing Russian forces. And unfortunately, in the fog of war, orders were either miscommunicated or misunderstood and the Light Brigade, which was suppose to pursue a retreating Russian artillery, instead went for a frontal assault on a different Russian artillery that was well positioned and much larger. As the poem describes, the small force was surrounded and shot at from all sides. The casualties were high and the small division was forced to retreat. While historians have argued for decades about what really happened, there is no doubt among any of them that the Light Brigade showed true valor in facing an obvious outcome. 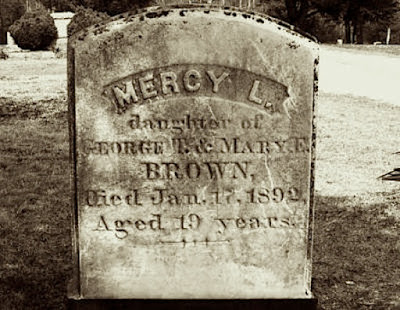 Most people assume the lore of vampires that originated in Europe, stayed in that area, but there was a time when America was embroiled in the middle of a vampire craze in New England. It was the 1800s and the dreaded consumption was wreaking havoc. Many families lost several of their members. One of those families was the Brown family. It was the death of one of their daughters that started the Legend of Mercy Brown. Were there really vampires in America and was Mercy one of them? Join us as we investigate the history of this craze and a young woman named Mercy Brown.

A few podcasts ago, we covered the Salem Witch Trials. New England was swept up in a craze about witches during that time and it would seem that superstitions still ran high in this area, even after it was apparent that what happened in Salem and other parts of New England was terribly wrong. In the late 1800s, tuberculosis started running rampant throughout the area. The Brown family lived in Exeter, Rhode Island. Exeter was sparsly populated and the Civil War had decimated the town's numbers. Soon something else would lower the population even more. The Brown family consisted of George, his wife Mary Eliza and their children. George was a farmer and well respected, so it was tragic when his wife Mary took ill. By 1883 she had died and eldest daughter Mary Olive was sick. She died seven months after her mother.

At the time, tuberculosis of the lungs was referred to as consumption because it took a while to kill its victims. They seemed to waste away as they coughed up blood. The ill would grow pale and stop eating. Eventually, they would look almost like what most people would assume a vampire would appear to look like. One out of four people were dying from the disease. Rumors and superstitions instilled fear that perhaps something other than disease was happening here. And when one family seemed to have more deaths than others, town folk wondered if perhaps a family of vampires was living in their midst. A few years passed and life went back to normal for the remaining members of the Brown family. Everyone was happy and healthy until George’s son Edwin took ill. Knowing what the disease could possibly do to Edwin, George rushed his son to a doctor who recommended sending Edwin to Colorado Springs in the hopes that the mineral water would cure Edwin’s affliction. The climate of Colorado was believed to help cure people with tuberculosis as well. He improved and returned home only to find that his sister Mercy Elena had taken ill.

Mercy was ninteen, but youth was not on her side. She had contracted what had been termed the "galloping" variety of tuberculosis. This meant that the disease moved swiftly. Mercy passed away on January 17, 1892. Her body was placed in a stone crypt awaiting the spring thaw to be buried. This helped preserve bodies. Edwin's disease took a turn for the worse and soon the people of the town started blaming a vampire for the Brown family's woes. They were certain that the vampire was living inside one of the Brown graves. This belief was held in more than just the town of Exeter. At least 80 burials have been found in recent years that appear to exhibit signs that people had been exhumed and their bodies desecrated in some way as to stop them from rising from their graves. Henry David Thoreau mentions an exhumation in his journal on September 29, 1859 to prove the point that this panic was a very real historical event.

With Edwin growing sicker and weaker, George was getting desperate. He did not want to lose his son and he started to believe that perhaps the neighbors were right and a vampire was stalking his family. This vile undead thing had to be entering his son's room at night. The only thing to be done was to exhume his family members and find out who was the culprit. Imagine how desperate these people in new England must have been to exhume their loved ones. It was happening all over. Doctor Harold Metcalf joined George in taking part in an old folk remedy. Together, on March 17, 1892, they exhumed the bodies of Mary Eliza, Mary Olive and Mercy to find if any of them were vampires. Mary Eliza and Mary Olive’s skeletons were all that remained. However, Mercy’s body was still fully intact because she had been placed in the cool crypt and it was winter. Decompensation had not really begun. The two men also believe that they found fresh blood on her body. Mercy Brown was the vampire!

As was the practice in that day, Mercy's body was cut open and when her organs were found to still be full of blood, everyone was certain that the ritual they were about to embark upon was right. Mercy's heart was removed and burned. The ashes were collected and mixed with water so that Edwin could drink the concoction. It was believed that this would cure Edwin of the vampire attacks and break the spell. Edwin was obviously not cured. Within two months, consumption had taken his life as well. Historically, it is recorded that Mercy Brown was the last vampire exhumation. Newspapers of the day like the Providence Journal reported the story and referred to what was done as barbaric. This seems to have helped stop the practice of exhuming bodies.

In Bram Stoker's Dracula, Dr. Seward writes in his diary, "There are such beings as vampires, some of us have evidence that they exist. Even had we not the proof of our own unhappy experience, the teachings and the records of the past give proof enough for sane peoples." The people of Exeter and elsewhere were sane people. They got caught up in a craze. But what they did may have left lasting effects in the afterlife. Desecrating bodies and the emotions around this seem to have led some spirits to hang around, particularly Mercy Brown's spirit. Fun fact: It is believed the story of Mercy Brown inspired Bram Stoker as well and that Lucy is based on Mercy.

To this day, visitors of the Chestnut Hill Cemetery in Exeter, Rhode Island report strange occurrences surrounding Mercy Brown’s grave. Stories of seeing the ghost of Mercy Brown taking a stroll along the graveyard are told by visitors. The sound of a young woman crying is heard and even a bright blue light near Mercy’s tombstone has been seen by some guests. Locals say that if you hide behind the tombstone of a man named William C. Johnson and look through the tombstone’s square hole towards Mercy’s grave on a moonlit October night, you may see the ghost of Mercy Brown walking through the cemetery. And a tradition has grown around the idea that one can make Mercy appear by knocking on her grave three times and asking, “Mercy L. Brown, Are You A Vampire?” Mercy will appear to you or speak to you.

There is a bridge near the cemetery that some claim Mercy visits. The faint smell of roses can be detected when she is nearby. And there are those who are terminally ill that claim Mercy has come to visit them to tell them that dying really isn't so bad after all. In 2011, two teenage girls died in a car accident while on the way home from a moonlight visit to Mercy’s grave along Purgatory Road. Mercy made a quilt that Brown family descendants still have to this day with a pattern that is called the Wandering Foot. A legend claims that if someone sleeps under a quilt with this pattern, then that person will be doomed to roam the earth forever. Surely, Mercy herself had slept beneath the quilt. Is this the cause of her unrest?

Were there ever vampires in New England? Did New Englanders allow themselves to get carried away again a hundred years after their witch trials? Does Mercy Brown's spirit still walk among us because of the false accusations? Is she searching for her heart? That is for you to decide!

Show Notes:
For more information on the vampire panic and archaelogical finds:   http://www.smithsonianmag.com/history/the-great-new-england-vampire-panic-36482878/?no-ist
Posted by Diane Student at 7:40 AM