Moment in Oddity - The Case of the Backward Imposter Body

A very strange medical case presented itself in 1881. A man had been in a tragic accident that had taken his life. His body was sent off for an autopsy and what the doctors found was quite strange. The man's organs were transposed. This means that all his organs were in the opposite side of the body than where they would be in a normal human. The heart was on the right side. The liver was on the left side. There had been other cases of people with transposed organs, but all died as infants. The fact that this man had lived into adulthood was quite amazing. But the case takes an even weirder, sinister twist. You see, these doctors loved having such a specimen. How could they possibly let this medical marvel go back to his family for burial? They decided that they must keep the body. They didn't need the head. After all, the brain is in both hemispheres of the head. Perhaps you have already guessed what they did. These unscrupulous doctors cut off the head of this man and attached it to the body of another. Then they sent that body to the family. The family, of course, noticed something amiss and sued. It's bad enough that doctors would do such a thing, but the fact that they actually thought they could get away with their deed is just plain odd.

This Day in History - The Hobbit is Published

On this day, September 21st, in 1937, J.R.R. Tolkien's classic "The Hobbit" was published. George Allen & Unwin Ltd. of London were the first edition publishers. It debuted with much acclaim and by December the 1,500 copy first run was sold out. The Hobbit was written for young adult readers and was nominated for the prestigious Carnegie Medal, but the book is enjoyed by adults as well. The novel is the recording of a journey taken by a hobbit named Bilbo Baggins. He joins thirteen dwarfs and a wizard named Gandalf in a quest to take back the dwarfs old home and treasure, which was taken from them by a dragon named Smaug. Tolkien was influenced by many other works when it came to writing the Hobbit. George MacDonalds "The Princess and the Goblin" influenced his imagery of goblins. MacDonald also helped Tolkien to meld his Christianity with fantasy. William Morse and Jules Verne also influenced Tolkien. Norse mythology runs heavy in the novel as Tolkien was a Germanic Philology scholar and had a passion for Norse stories. The novel has withstood the changing of the decades and is even more popular today, having been made into a series of films by Peter Jackson. 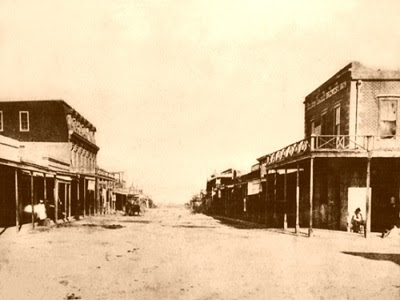 We are joined on today's episode by author and medium Janice Carlson to discuss her experiences in Tombstone, Arizona. Tombstone calls itself "The West's Most Famous Town" and it probably is just that. Come with us as we explore the history and hauntings of Tombstone!

Ed Schieffelin was a quirky looking fellow. He had long black hair that hung below his shoulders and his long black beard was tangled in knots. He looked forty even though he was only twenty-nine years old. His clothing and hat were very worn and covered in patches made from deerskin and rabbit fur. His appearance reminded people of a wild animal. Ed was part of a scouting expedition whose purpose it was to basically spy on the Chiricahua (chir-i-cow-uh) Apache tribe. Ed was also a prospector and he was always searching for precious minerals and gems. He had just been in the Grand Canyon area, but found nothing.  He would wander out in the barren land around camp looking for precious stones. His fellow scouts would laugh and tell him that the only stone he would find out there would be his tombstone. Ed got the last laugh when he stumbled upon some silver. He named the mine Tombstone as a reminder of what the doubters had said. The year was 1877 and Schieffelin is credited as founder of the town of Tombstone.

As happened in that day, people heard about the silver strike and they came to the area seeking their own treasure. They came for good reason because Ed's strike was assayed as the Mother Lode. It was necessary for a town to be built, so a man named Solon M. Allis came and laid out the town. Ed was a millionaire at this point and he went off in search of more adventure. He was found dead in a cabin in Oregon, laying across a table where he was working gold ore. His journal remarked that he had struck it rich again, but left no indication where the find was located. Ed was brought back to Tombstone and buried in prospector's clothing according to his wishes. A monument was built in his honor.

By 1880, the town's population had soared to close to 20,000 people that were made up of white men, women, children, Mexicans and Chinese. There were a hundred saloons and a thriving red light district. There were also theaters. Schieffelin Hall was built by Ed's brother Al and still stands today and is used for government offices. It is the largest standing adobe structure in the southwest. One of its claims to fame is that Wyatt and Morgan Earp saw a play there the night Morgan was assassinated. For a time, it served as a Masonic Hall and then it fell into disrepair. It has been fully restored and quite possibly could be the most haunted location in Tombstone. The sounds of spurs and something that sounds like chains have been heard many times. Groups of people hear it at a time, so it is hard to relegate to just someone's overactive imagination.

Twice the town was ravaged by fire. Once in 1881 and again in 1882. One of the fires is rumored to have started when a lit cigar hit a barrel of whiskey at a saloon. Significant pieces of property were damaged and forty men lost their lives. The smell of smoke is still smelled today and some people claim to have seen the spirits of burn victims wandering around. Janice told us that this particular soul sense is named clairalience.

Over time, the silver mines started filling with water and it was too costly to pump it out. The town slowed down and people started leaving. In the end, $37 million in ore was pulled from the mines. Today, around 1500 people call Tombstone home. That doesn't include the ghosts.

Janice made a visit to Boothill Cemetery where she tried testing her medium skills to figure out what particular people died from. There are many Boothill graveyards throughout the west and they derive their name from the idea that gunfighters died with their boots on. In Tombstone's Boothill Cemetery, three men who died at the shootout at the O.K. Corral are buried here: Billy Clanton, Tom McLaury and Frank McLaury. Three hundred people are buried here in total. The cemetery was no longer used after 1886 except to bury the occasional criminal. The City Cemetery on Allen Street became the new burial ground. This website has a detailed layout of Boothill Cemetery: http://boothillgraves.com/

The O.K. Corral shootout was between the Earps and the Clantons. The Clanton group included Ike and Billy Clanton, Tom and Frank McLaury, Billy Claiborne and Wes Fuller. The Earps' group included Virgil, Wyatt and Morgan Earp and Doc Holliday. It lasted all of thirty seconds and three men were dead. Morgan suffered a gunshot to his shoulder and Virgil was hit in the leg. No one is sure who shot first, but one of Holliday's bullets was the first to hit a body. The area is said to be haunted by those who died and gunshots are heard many times. Ghost Hunters has paid the place a visit.

Janice met up with Sister Paranormal Investigators at their shop, The Undertaker Shop. The place is reportedly quite haunted and Janice regaled us with the haunting experiences she had there as well as those of the ladies who own the shop.

The Old Tombstone Hotel has a haunted room. Room 119 had a guest who hung himself one night and now reportedly has decided to never checkout. His disembodied voice is heard and objects move about the room. Apparitions of cowboys and stagecoach drivers have been seen at various locations. The Crystal Palace Saloon seems to be one of their favorite locations to visit. The First Marshal of Tombstone, Marshal Fred White, was shot down in the street by Curly Bill Brocius in October of 1880. Curly and his gang decided to shoot up the town one morning and Marshal White decided to disarm them. Curly supposedly accidentally shot the Marshal in the groin and he died two days later. He was shot in front of where the Bird Cage Saloon stands today and his spirit has been seen in the area and could possibly be one of the haunts at the saloon. And we have our woman in white! She is seen on the main street of Tombstone wearing a long white dress. There are two tales behind her haunting. She was either a mother so distraught over her child's death from Yellow Fever that she killed herself or she was the Madame of a brothel who was hanged for her crime.

It would seem the Old West is still alive in Tombstone. Do the cowboys, ladies of the evening, prospectors and gunfighters of the past still carry on in Tombstone today? Is this town haunted? That is for you to decide!

Janice Carlson's "Soul Sensing" book is fascinating and we highly recommend it. Check out Janice's website at:  http://www.janicecarlson.com
Posted by Diane Student at 6:57 AM