HGB Podcast, Ep. 65 - The Legend of the Rougarou

Moment in Oddity - You as Tree Food

Why not make yourself useful when you are dead? You've heard of sustainable fish, why not sustainable burials? Capsula Mundi, a company out of Italy, has introduced organic burial pods. These pods look similar to the alien pods featured in the movie "Cocoon." If you are young and haven't seen that great movie, Google it! A dead body is put inside the burial pod that is made of biodegradable plastic starch. The pod containing the body is buried beneath a young seedling tree chosen by the dead person's family. As the tree grows, the roots wrap around the pod and feed off of the nutrients of, well, the human fertilizer. This process makes you and I tree food. Rather than a field of tombstones, cemeteries would become forests. As avid taphophiles, we vote for having a tombstone near the burial trees at least. This process would help do away with the 800,000 gallons of embalming fluid used each year and the millions in pounds of copper, bronze, steel and wood needed for caskets. The idea of being food for not only bugs, but for a single tree does seem a bit strange, but in the end, just think...someone might decide to use your tree like Shel Silverstein's "The Giving Tree" and then you can be part of someone's house too! Now that certainly would be odd!

On this day, September 3rd, in 1838, a twenty-year-old black slave named Frederick Bailey escaped from his master in Baltimore. The young Bailey had yearned to be free and had tried to escape two years earlier. A fellow slave betrayed him and told the slave master of Bailey's plan. Bailey was thrown into jail and then sent to the shipyards to work there. He learned the trade quickly and adopted the jargon of a sailor. All of this was to prepare him for his next daring escape. On September 3rd, he disguised himself as a free black sailor and jumped aboard a carriage bound for the train station. He carried a friend's protection pass, which worked the same as "free papers." When he arrived at the train station, Bailey skirted around the ticket agent and jumped aboard the train into the segregated car. As the conductor came through the car, Bailey held his breath. The physical description on the pass did not describe Bailey in the least. Thankfully, the conductor was distracted by the beautiful eagle emblazoned on the pass and he did not read the pass in its entirety. He collected Bailey's fare. The escape continued aboard ferries and other trains and Bailey finally made it to New York. Bailey later moved to Massachusetts and worked as an anti-abolitionist. He feared capture from escaped save catchers and so he changed his name to a name that would live on into infamy: Frederick Douglass.

The Legend of the Rougarou 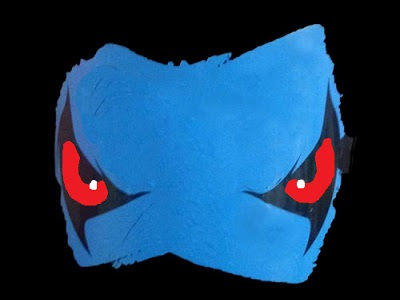 Deep in the Bayou, originates the legend of a mysterious creature. There are more than gators, Cottonmouths, snapping turtles and the giant rat-like Nutria in the swamps. Haunting howls in the middle of the night indicate that something large, wild and scary roams about the mangroves. Tales about this creature have been passed down through the generations. Were these stories created just to scare the children and keep them from wandering into the swamp or to get them to behave? Are these tales just simply made up to explain the disappearance of domestic animals? Join us as we delve into the legend of the Rougarou.

The Bayou is an area full of superstition and strange stories. Some of these superstitions include warnings against sleeping in the moonlight or you might go mad. Mirrors hung near the front door of a house will keep evil spirits from entering because they are so captivated by their own images they will gaze upon themselves until the sun rises and chases them away. If an alligator is found to be under your house, it could mean that someone inside the house will soon meet their end. Drilling a hole in a dime and wearing it around your neck will also ward off evil.

Most people are aware of the strong French influence in the Bayou. The dialect of Cajun itself is a derivative of French mixed with English. The term Rougarou comes from the French word Loup-Garou, with Loup meaning wolf in French and Garou being the term used to describe a man who turns into an animal. European countries believed that werewolves were real creatures and the French brought these tales with them to the new lands they sailed away to, both in Canada and America. People who live in Louisiana use both Loup-Garou and Rougarou interchangeably. But before anyone mistakes the Rougarou for just another word for werewolf, let us explain how very different this particular creature seems to be from our understanding of the typical werewolf.

Wolves are not a common part of the landscape in Louisiana. A core part of werewolf mythos is that a human is bitten by a werewolf, survives and thus becomes a werewolf as well. Somewhere in the lineage, an actual wolf has to have been involved. This would be nearly impossible in Louisiana and so, many other animals are used in the legend. These animals include cattle, pigs and dogs and these animals are generally white in color. Some stories do claim, however, that a person could be cursed with lycanthropy through witchcraft and thus they could become a Rougarou. Some folklore even claims that just seeing a Rougarou would curse the eyewitness with becoming the creature. And unlike werewolves, moon cycles have nothing to do with the human becoming a Rougarou. The Rougarou maintains its human intelligence while in the animal form giving it complete power over what it does.

An even more bizarre twist to the legend is that sometimes a Rougarou will venture into a small town, not seeking people to devour, but looking for someone to deal it a fatal blow so that it can be freed from the curse. Upon being shot or mortally wounded in some other way, the Rougarou will transform back into a human and tell his attacker his true name. The attacker must not repeat the name or even tell anyone about the incident for one whole year or he too will be afflicted with the sickness that will turn him into a Rougarou. One such tale claims that a young boy was walking out of the Bayou when a white dog came nipping at his heels. The boy became angry and slashed the animal with a knife. The dog transitioned into a man and he warned the boy not to tell anyone what had happened. The boy could not resist and he told several friends. Soon, he was disappearing from his room late at night. He would return in the morning with no explanation as to where he had been. Several months later he was found dead in the street and the police claimed it was suicide. But we know better and hopefully this did not result in a new Rougarou terrorizing the town.

It is quite clear that the Rougarou is some kind of shapeshifter. But what exactly makes this creature dangerous? Apparently, the Rougarou is a blood sucker like many of its other counterparts. The Chupacabra and Goatman being examples. But even that is not where the true danger comes in regards to this creature. Some believe that the Rougarou has nothing human about it at all and rather that it is some kind of demon that has taken on human form, albeit an animalistic human form. Its proportions are almost impossible with people claiming that it rises to seven or eight feet tall. It has large canine foreteeth and even more horrifying, red glowing eyes. The Rougarou is accused of abducting people and leaving their torn open, bloodless bodies in the Bayou somewhere.

The legend is so strong that many reality shows have featured investigations about the Rougarou. Destination America featured the legend on their "Monsters and Mysteries in America" show. History Channel's "Cryptid: The Swamp Beast" covered reports of torn apart animals in Louisiana with many locals claiming it was the Rougarou. Even the Audubon Zoo in New Orleans has an exhibit featuring the Rougarou.

Texas Cryptid Hunter reports on his blog the following story: 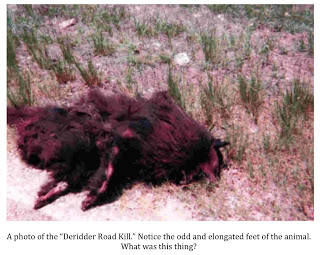 "Back in 1996 The DeQuincy News printed a rather unusual story. It tells the story of a woman named Barbara Mullins who stumbled across something very unusual on the side of a rural Louisiana state highway. Mullins was driving down Louisiana State Hwy. 12 when she noticed what appeared to be the road-killed carcass of a large animal at the edge of the road’s paved surface. She decided to stop and have a look. What she saw amazed her.

She described the animal as being roughly equivalent in size to an adult St. Bernard. The beast was covered with a thick, matted coat of reddish-brown hair. What really stood out to Mullins was the overall simian appearance of the animal. This didn’t look like any sort of dog she had ever seen. The snout was more like what one would see on a baboon than a dog. The ears of the animal were small and pointy: not dog-like at all. The feature that stood out more than any, however, was the very un-paw-like feet of the creature. They were long and elongated and looked much more like the feet of an ape than those of any canine. Mullins, unlike so many people who have had strange encounters, had a camera in the car and took several intriguing photos.

I have to admit that the photos of the “Deridder Road Kill,” as the carcass has become known, are very interesting to me. The Louisiana Department of Wildlife and Fisheries wasted little time before stating the animal was nothing more than a Pomeranian dog. Others felt, due to the simian-like features present, that the animal was some sort of primate. Some ventured this was physical evidence proving the existence of none other than the legendary rougarou/loup-garou."

How does one go about destroying the Rougarou? As detailed earlier, some tales claim that just stabbing the creature is enough, but most stories claim that the creature must be either decapitated or burned up with fire. These details make the Rougarou seem all the more dangerous. Was this creature simply devised to scare children into good behavior? Does some kind of hairy beast prowl about the Bayou? Is The Rougarou a legend or could it be real? That is for you to decide!
Posted by Diane Student at 5:24 AM