Moment in Oddity - Skeleton Under the Tree

Outside Collooney, Sligo, Ireland, a 215 year old beech tree was shaken from its foundations by a violent storm. The massive tree was actually toppled in the storm. Typically, when such an event occurs, people call a tree care company to come in and clean up the tree. In this case, archaelogists were called. The reason why: a skeleton was buried within the roots of the tree. The lower legs were still in the ground, but the roots pulled the upper skeleton up into the air. The archaeologists found that the skeleton belonged to a young man around twenty years of age and that he died between 1030-1200 AD. And his death was not from natural causes. It was violent. Knife wounds were found to the bones of the hand and the ribs. His body was not just left where he was found. It was actually buried in this spot as a formal Christian burial. We'll never know who this young man was, but the fact that his skeleton was revealed to the world because a tree blew over, certainly is odd!

This Day in History - Harriet Tubman Escapes For First Time

On this day, September 17th, in 1849, Harriet Tubman escapes slavery for the first time along with two of her brothers. Her brothers decided to return to the plantation and she returned with them, but three months later she escaped again and this time for good. She was born into slavery in the state of Maryland. She and her family suffered brutal physical beatings and she carried the scars and permanent physical injuries the rest of her life. Harriet did not just escape to the north and stay there. She became an active abolitionist and returned to the south using the Underground Railroad and helped up to 300 other slaves escape their bonds over an eight year period. She became a mentor for John Brown and while she was not thrilled with his use of violence, she did praise him as a martyr when he was killed at Harper's Ferry. At the start of the Civil War, the Union Army employed her to help free hundreds of slaves during the Combahee River Raid. Harriet became a leader in the civil rights movment and was a huge proponent of womens suffrage. She died in 1913 from pneumonia. She was buried with military honors at Fort Hill Cemetery. 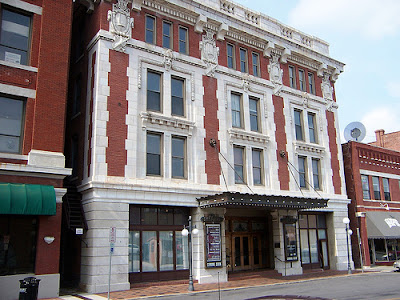 What is it about theaters that causes them to so often have tales of haunting experiences? Is it the emotions that are displayed on the stage and evoked in the audience? Are they just more prone to accidents and death? Landers Theater in Springfield, Missouri is one such theater. This theater has stood for decades and seen much history. Famous performers took to the stage, including Lillian Russell and Lon Chaney. When motion pictures became the thing, the theater adapted. But there is more than just a rich history to this place. Something else seems to have carried over through the decades. Spirit activity is reportedly high inside this elegant theater. Come with us as we explore the history and hauntings of the Landers Theater.

The State of Missouri became a part of the United States initially through the Louisiana Purchase of 1803. For many years it was just a territory, but in 1821, Missouri officially became a state. The area that is today the city of Springfield was originally populated by the Kickapoo Native American tribe. John Polk Campbell was born in 1823 in Tennessee. Campbell moved to Missouri and settled in a very large county that included most of southern Missouri. That county had been established in 1833. Campbell made a push for the county to be named Greene after American Revolutionary General Nathanael Greene. He then founded what would become the city of Springfield in 1829. In 1838, the city was incorporated.

The Old Wire Road travels through Springfield and it was on this road that the Cherokee passed through while on the Trail of Tears. The road was named Wire Road because it was along this route that the first telegraph line in the area was built. The road was an intregal part of the Civil War and portions of it still exist today. It was after the war that Springfield became a part of the Wild West. The town square had its first shoot-out in 1865. The man who won the gunfight and became nationally known was Wild Bill Hickok. Springfield is also where the birth of Route 66 occured. Traces of that famous route are still a part of Springfield. In 1891, the Baldwin Theater was built.

The Baldwin Theater was named for a man who owned a stove factory in town and pushed for the building of the theater in the city. It was a rival to the already flourishing Grand Theater. That theater burned down in 1895. The Baldwin would suffer the same fate in 1909 when a fire started in the boiler room and spread quickly. The town needed a new theater and plans for the building of Landers Theater were begun. The Boller Brother's architectural firm designed the Landers. Their specialty was designing movie palaces and they just happened to be from Missouri.

The theater was built by John and D.J. Landers and R. W. Seward in 1909 at a cost of $100,000. The style was that of the Neoclassical found in France. This style is influenced by Ancient Greece and the French movement was expressed in what they called the Louis XVI style. The theater was framed in wood and it is thought that the reason for this was because one of the builders owned a lumber company. Missouri limestone piers were installed in the front of the building and the quoins, cornices, cartouches and parapet were made from terra cotta. The rest of the structure is made from brick. 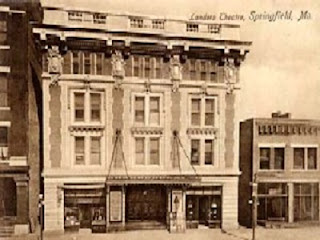 A large stage was built so that live performances could be run at the theater. The design around the stage was ornate and electric lights were installed. Plush seats made theater goers comfortable and the first production they would watch would be "The Golden Girl" starring Lillian Russell. It debuted on September 18, 1909 and the Missouri Republican wrote of the event:


“Under the tempered glow and radiance of two thousand electric lights which shed their beams, rivaling the brilliance of a mid-day sun in ocean mist, or the witching haze of a dreamy Indian Ozark summer, the devotees of fashion and pleasure and of material progress, met and mingled last night, at the opening of the Landers theatre, a commodious and beautiful temple of amusement, the perfect appointments of which brought a flush of admiration and of pride to the cheek and a gleam of pleasure to the eye of those who greeted “The Golden Girl” and witnessed the initial offering of the playhouse which came to Springfield as a heritage of fire.”

Landers was part of the Orpheum Circuit of theaters. This was a chain of movie and vaudeville theaters. The Orpheum Circuit later became part of the RKO corporation. The O in that stands for Orpheum. Famous performers other than Lillian Russell that took to the stage were John Philip Sousa, George Cohan and Lon Chaney. Chaney was the "Man of a Thousand Faces" and performed in the Phantom of the Opera and Hunchback of Notre Dame. "The Birth of a Nation" debuted in 1915 and was shown in the theater. This was a silent movie and the first 12-reel film in America. The movie has been controversial as it was used to recruit members of the KKK and is considered to be racist. Nevertheless, this was the beginning of Landers Theater being used as a movie theater.

In 1920, the theater suffered a fire. A boiler had exploded. There were coal bins under the stage and they soon caught fire. Every fire truck in town came to the scene to prevent the entire block from being engulfed. Fireproofing precautions taken inside the theater like the hanging of an asbestos curtain, helped to keep the fire contained and kept the theater from being a total loss. Within five months, the Landers was rebuilt and reopened. In 1928, "talkies" came to the theater. This made Landers the 35th facility in the world to play talking motion pictures. The stage was still used though and in 1961 NBC-TV began broadcasting the Five Star Jubilee from the theater. Movies continued to run at Landers through to 1970.

In 1970, the Springfield Little Theater organization bought Landers Theater. They began the effort to restore the theater to its 1909 grandeur. The 527 seats have been restored along with the Baroque Renaissance/ Napoleon styled decoration. The building was placed on the National Register of Historic Places in 1977. Springfield Little Theater stages around nine productions a year. Other musical performances are staged here as well. Around 60,000 people watch the productions each year. But there are rumors that something other than just the living are watching the performances.

As is the case with so many old theaters around the world, Landers Theater is rumored to be haunted. Spotlights are suddenly unplugged. People feel a tap on their shoulder when no one is there. Performers claim that during rehearsals and also during live performances, they see a shadowy apparition watching them from the upper balcony. The 1920 fire did more than just damage the theater. It took the life of the theater's janitor. Some believe that he is the shadowy figure seen in the balcony.

The balcony also plays home to a residual haunting of a baby. Apparently, a worst mother's fear came true one night in the theater. A woman holding her baby on the balcony accidentally dropped the baby. This same visual of the baby falling from the balcony haunts the actors on stage at times. Performers also claim to hear the disembodied cries of a baby and occasionally the murmuring words of comfort from a female ghost.

The costume room is on the fourth floor and has a window. A male apparition has been seen in the window several times with long blonde hair. He apparently wears Elizabethan clothing, which makes us wonder if he is in costume. The interesting piece to these sightings is that this ghost has never been seen inside of the theater. He is only seen from the outside.

On another occasion, a director saw a man standing in the building and he struck up a conversation. The man said nothing and walked towards a pillar and never crossed back into sight. He just disappeared. The director said the man had a beard and long hair and stood about six feet tall.A despondent stage hand hanged himself from the rafters and stayed there through three performances before anyone noticed him. It is believed that he walks about on the catwalks.

And then, there is the Green Orb and the Black Void. These are just plain creepy. The Green Orb has been seen near the west stairs and near the balconies. It glows green and measures about five feet tall. The Black Void is just that, a darkness that envelopes the area it is in and has been seen in many parts of the theater. People can tell that it is present because they suddenly can't see through to something behind the Void like a brick wall. There will be a black patch in front of the wall that appears to have no bricks.

Landers Theater is one of the view original theaters still dotting the landscape of America. As seems to be the tradition of these grand old places, tales of unexplained activity are reported. Do the ghosts of former actors and workers continue to hang around the stage? Are the noises that are heard, just the sounds of an old building settling? Is Landers Theater haunted? That is for you to decide!
Posted by Diane Student at 5:19 AM