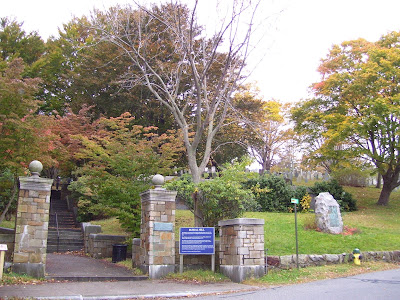 The history of the town of Plymouth, Massachusetts is unique in that most Americans are familiar with the start of this settlement and that is why it is known as "America's Hometown." After all, we have a national holiday inspired by events that took place in Plymouth: Thanksgiving. There are some misconceptions about the history of the Pilgrims and Plymouth and many people may not think about the history that has continued on into the afterlife. In this episode, we will bring you the history and the hauntings of Plymouth.

The Wampanoag Tribe resided in the area that would later become Plymouth Colony. The area had been visited by Europeans from both England and France. These visits ended up bringing a plague that nearly wiped out the Wampanoag. The area was a perfect place for a new colony to begin.

A group of people seeking freedom from tyranny, freedom from the mixture of church and state and freedom from state imposed religion decided to start meeting in secret in Great Britain. They found it hard to keep their meetings secret and they decided to flee to a town in Holland called Leyden. Here they could practice their brand of religion, but the conditions in which they lived were not pleasant. They were working as a laborers for low wages and their children were forced to work as well. They decided that a move to the New World would be a better alternative, so they found financing from some rich British financiers and they booked passage on a cargo ship named the Mayflower in 1620. One hundred and two people boarded and spent 66 days below deck in horrid conditions. Along the way, one of them died and a child was born. They landed at the tip of Cape Cod and after exploration, they sailed inland and decided to start their settlement in Plymouth. That first winter was rough and 51 of them passed away. We came to know these courageous people as Pilgrims.

It is important to note that Plymouth Plantation was not built upon land that was taken from the Native Americans. The plague mentioned earlier left the natives believing that the land was cursed, so they were happy to let the Pilgrims have the land. When the Pilgrims landed, they found corn hidden by the Pokanoket tribe and they took it because without it they would die. After they were able to grow their own food, they returned what they had taken. The Pilgrims had a good relationship with the Pokanokets and the proof came in the first Thanksgiving. Chief Massasoit had been invited to come to a feast along with his immediate family. The Chief did not understand completely and showed up with 99 braves. The Pilgrims were worried they would use up all their food stores, but the Pokanokets brought lots of meat and the Pilgrims made it through with that assistance.

Plymouth Colony was originally a commune like settlement until Governor Bradford realized that people would not work without incentive. So men were given sections of land on which to plant and if they did not grow, they did not eat. Plymouth also started the idea of self rule with governors and pastors being voted on by the people. The members of the society signed the Mayflower Compact to solidify their government. It was a good time, but things for the Plymouth Colony would deteriorate as more and more people came. Encroachment on native lands and other disputes culminated in the King Philip's War in 1675.

The King Philip's War was the last effort by several native tribes to try to drive out European settlers lead by the chief of the Pokanokets. It lasted for a little over a year. Thousands died during this war and only ended when King Philip was killed by a colonist. His body was dismembered and his head was staked at the head of the town for 25 years to warn other Native Americans to leave the colonists alone. A sad postscript to add to this chapter is that King Philip was the son of Chief Massamoit. Chief Massamoit had come down with the plague and he was going to die. A Pilgrim named Edward Winslow made up an herbal medicine and nursed the Chief back to health. They became lifelong friends and secured the bond between the Pilgrims and Pokanokets. Winslows decendant engaged in the war with King Philip, so that the bond formed by Chief Massamoit and Winslow was broken by war and death.

We took a ghost tour and we scare the numerous supposed hauntings around the center of Plymouth. Is the town really haunted? That is for you to decide!
Posted by Diane Student at 12:30 AM