Janus cats are felines born with two faces. In general, these cats have two noses and two mouths and it is those two mouths that make it very difficult for the cat to survive. Most Janus cats live only a few days after birth. A Janus cat named Frank & Louie broke all records when he lived to be fifteen years old. The cat had two noses, two mouths and three eyes. One of the factors that helped him survive was that one of his two mouths was non functioning and had no esophagus connecting the mouth to the stomach. The dangers of choking were greatly reduced because of this. The culprit that took the life of Frank & Louie last December was cancer. The fact that Frank & Louie was given only three days to live when he was born and that he managed to make it to fifteen years with the love of an owner is not only heartwarming, but a tad odd because after all, Frank & Louie did have two faces.

This Day in History - Five Hung in Salem Witch Trials

On this day, July 19th, in 1692, five women are hung in Salem following their trials accusing them of witchcraft. The Salem Witch Trials are infamous in American history. Perspective has revealed that mass hysteria and false accusations can lead humans to do very bad things. It was in January of 1692, after two girls fell mysteriously ill, that the Salem witchcraft panic began. The area was ripe for mass hysteria. Fear of the Devil was pounded into the people and they had just witnessed the outbreak of a small pox epidemic. Toss in extra fear due to raids by Native Americans and this was a pot ready to boil over. The sick girls claimed to have been part of an occult ritual with a slave woman name Tituba. Sarah Goode and Sarah Osborne were also accused of taking part. Tituba admitted to being a witch and backed up the claims made against the two Sarahs. She also accused two other women. Young girls began to exhibit odd behavior. By May, over 150 men and women were in jail for witchcraft. On July 19th, Sarah Wilds, Rebecca Nurse, Susannah Martin, Elizabeth How and Sarah Good were all hung on Gallows Hill. The mass hysteria continued, finally ending in the Fall. When all was said and done, twenty more than likely innocent people had been put to death and four others had died in prison. 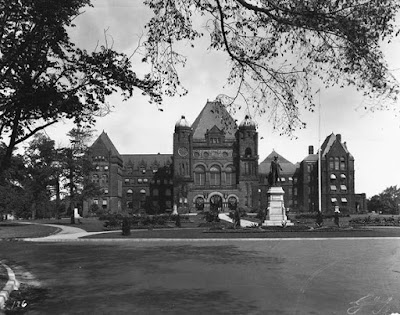 Queen's Park in Toronto is a beautiful picturesque park that was a part of the early park movement in Canada. Within it's borders, it holds the magnificent legislative building. The park is encircled by the city that grew up around it and enjoyed by many. Some of those that enjoy the park are doing so in the afterlife. There are at least five spirits that have been encountered at the Legislative Building. There was another building here before the government structure, an asylum. Do the ghosts of the past haunt the marble hallways of this place? Come with us as we explore the history and hauntings of Queen's Park.

Etienne Brûlé was a young man with a deep desire to live among indigenous people. This dream led him to become an explorer and around 1610, he landed upon the shores of Lake Ontario in an area that would become known later as Toronto. Brûlé served as an interpreter and guide for Samuel de Champlain. As an aside, Brûlé would later betray his native France, helping the English capture Quebec City. This same kind of behavior against the Huron people, with whom he lived later, would lead the Huron to stab and dismember him and then eat him. In 1750, Fort Rouille was established in the area and in 1787, the Toronto Purchase happened. This purchase was basically the Mississaugas tribe giving up the land to the British Crown. In 1793, the Town of York was established and that name was kept until 1834 when the city of Toronto was incorporated.

King Edward VII officially opened Queen's Park in Toronto during a tour he was taking there in 1860. The park was landscaped with white pines, elm, oak and maples that lined sweeping drives. The park was bordered by Taddle Creek Ravine and McCaul's Pond. Two gated entrances were placed at the north and west ends of the park. The park was named in honor of Queen Victoria. Queen's Park has become a figure of speech for the Ontario Government because in 1893 the Legislative Building was built on the grounds of Queen's Park. It was designed by Richard A. Waite and the architecture is Richardsonian Romanesque in style that incorporates arches, columns and intricate stonework. The building has five stories and was constructed from Ontario Sandstone that gives the structure a pinkish hue. Residents call it the Pink Palace. The exterior was decorated with gargoyles, friezes and grotesques, which are shapes or forms that are distorted, unpleasant and ugly.

The interior of the Legislative Building has a grand staircase with a central hallway running from the entrance. At the top of the stairs is the lobby for the Legislative Chamber. Wide corridors break off from the central hub running east and west and those corridors are each bisected by an atrium lined with ornate railings. The west wing is decorated in the Edwardian Neoclassical style with white marble and the east wing is Victorian in style with dark panelling.

The Pink Palace took the place of six other buildings that had been used for the running of the government. In 1909, it was decided that expansion was needed and a north wing was added. During that construction, workers needed to make repairs to the roof of the west wings. Beneath that roof were stacks of books and records that made up the reference library. These records were being prepared to move to a fireproof area being built in the north wing. The west wing had proved to be ill suited for preserving documents as it was heated with steam and sunlight crept in everywhere. Unfortunately, what the Toronto Daily Star dubbed a "Scene of Ruin and Desolation" occurred. Fire broke out in the west wing and the wood paneling and papers quickly went up in smoke. The upper floor was destroyed along with the documents.

In 1937, the northwest corner of the building became the viceregal apartment for the Lieutenant Governor of Ontario. It is three stories and has a reception room, dining room and offices. The music room is where swearing in ceremonies are conducted. A little fun fact is that the Legislative Building is featured on the front and back of Rush's 1981 album "Moving Pictures."

There are several spirits that have been seen in the building ranging from women who were most likely asylum patients to war heroes. The number of ghosts, at least five, makes this building one of the most haunted in Ontario. The grand staircase is one of the main places were full body apparitions have been witnessed floating. Beneath the building are the vaults. Not many people know about them and few have ever been in them. It is believed that wraiths inhabit this part of the structure.

The sergeant-at-arms has a desk in the chamber were laws are debated and passed. It is next to this desk that a soldier has been felt and seen standing. Could this be Captain Charles Rutherford who was a World War I hero and served as the sergeant-of-arms from 1934-1940? Rutherford had joined the 5th Canadian Mounted Rifles and he was wounded in battle. After he recovered, he found himself back in Northern France and one day he was separated from his team. He happened upon a group of Germans and he should have been a dead man. Rutherford was a quick thinker and a good bluffer. He told the Germans to surrender immediately because they were surrounded on all sides by Canadians. The Germans believed him because what fool would try such a thing. They surrendered and Rutherford was awarded the Victoria Cross for bravery. He died in 1989. Has he come back to a building he once loved? Several psychics claim that a ghost claiming to be named Charles is there.

There is the ghost of a man with a red beard who once served as Speaker before he found a better offer as minister of crown lands. His name was Richard Scott and he has been seen around the Speaker's apartment in the building. A medium said that there is a strong feeling of service coming from this spirit.

A former Lieutenant Governor still seems to be in the building. In 2006, an aide to the current Lieutenant Governor at the time, witnessed a man leaving the vice-regal washroom. The man went into the music room and when the aide followed because he did not recognize the man, he was nowhere to be seen. Some time later, a janitor was cleaning in the area and saw a man in a swallow tail suit near the washroom. He reported the man in broken English and when he was asked to identify the man, he pointed to the portrait of a former Lieutenant Governor. No one will reveal which portrait it was. Inside the vice-regal apartment, a man in red has been seen. There is a soldier seen near the stairs that wears red, so some speculate that these spirits are one and the same. Some of the Lieutenant Governors are wearing red uniforms in their portraits though.

There are three female ghosts here as well. It is believed that they are former patients of the asylum that once stood on the grounds. The asylum was named the University Hospital for the Insane and then the Auxiliary Female Asylum. It is important to note that the asylum had been built from limestone and much of that stone was used to lay the foundation of the Pink Palace. One of the women had hung herself in the basement. Her apparition is seen hanging from a hook in the basement. Another of the women, named The Maiden, has a checked dress that she wears in an unusual way. It is usually thrown over her head. The third woman has stark white long hair. One of these women is usually seen in the fourth floor attic and she is angry. She gives off a malevolent feel and is vengeful. There are also reports of a woman in white, named the White Lady being seen on the third floor and she is heard wailing and moaning. This could be the woman with long white hair.

Members from The Searcher Group were given access to the building and two of their mediums claimed that a spirit couple was dancing in the hallway in 1800s ballroom attire. As to who these people could be, no one knows. The group also captured an EVP of a woman humming and another of a man saying, "Hello." The smell of booze and smoke was detected by members of the group in various areas of the building.

Could the beautiful building in Queen's Park hold more than just legislative meetings? Could the angry and lonely souls from the asylum created an air of the supernatural because of the emotions left behind? Did some of the patients decide to stay? Are those who served the Parliament in the past still feeling duty bound to stay and continue their work? Is Queen's Park Haunted? That is for you to decide!
Posted by Diane Student at 7:29 AM