Nine ski hikers were hiking and camping in the Ural Mountains in 1959 when a very weird thing happened. All nine hikers were found dead in various locations and in various states of undress. The details of the story make what happened on Dylatov Pass so many decades ago even stranger. Igor Dylatov, for whom the pass has been named, was the leader of the group. The group included many graduate students from the Urals Polytechnical Institute. When the hikers did not return when they were expected, a search party was sent out and they made the unusual discoveries. The hikers had set up a large tent to share, which would protect them against the cold and snowy weather. The back side of the tent had been cut with a large knife from the inside as if the hikers had to make a quick escape and could not leave from the front of the tent. The tent was left in a state that made it appear that the hikers had been eating dinner before fleeing. This might explain why most were not dressed in the proper clothing and had no shoes when their bodies were found. The hikers appeared to have split into groups. Two were found dead next to the remnants of a fire wearing only their underwear. Three other hikers were found closer to the tent in such a way that it is assumed they were trying to return to camp. The other four hikers were found in a ravine. The bodies appeared to be unharmed, but autopsies revealed that many of the bodies had suffered internal injuries. One corpse was missing its tongue. All of the bodies revealed radiation exposure. Many theories have abounded through the years. Was there a weather event or an avalanche that caused the group to flee? Did a wild animal or pack of wild animals scatter the group? Did a UFO and aliens visit the group? A military operation was occurring nearby and some wonder if these young people got caught up in that. A more recent and interesting theory hypothesizes that an infrasound anomaly caused a repetitive wind event leading to erratic behavior from the group. The sound waves from this anomaly could have made the hikers crazy for a moment in time. The deaths were ruled as caused by exposure and internal injuries, which some believe occurred due to falls. What really happened we'll never know and the whole incident certainly is odd.

This Day in History - Coffee Comes to Hawaii

On this day, June 24th, in 1817, coffee is planted in Kona, Hawaii for the first time. Hawaii is the only state in the union that grows coffee. The first plants were installed by Don Francisco de Paula Marin who was the Spanish advisor to King Kamehameha the 1st. These first plants did not fair well. Chief Boki of Oahu decided to give it another try in 1825 and brought coffee plants in from Brazil. The plants flourished and soon coffee was planted on other islands. Coffee returned to Kona in 1828 when a missionary named Samuel Ruggles planted a coffee tree. Today, Kona coffee is considered a gourmet coffee sold throughout the world. It is very expensive in its pure form, so most Kona coffee is sold as a blend to make it cheaper. Hawaii boasts 700 coffee farms and several unique varieties are produced. 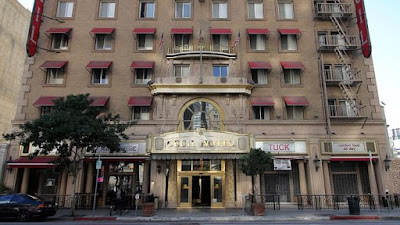 The Cecil Hotel in downtown Los Angeles is not a place where most people would want to rent a room.That might be why the Cecil Hotel was reported closed, but do not be fooled, the hotel just changed its name to Stay on Main and advertises itself as a hostel. Not only is it a budget hotel frequented by transients, but it has a creepy and murderous past that has caused it to be a source of numerous tales of haunting experiences. This infamous history includes suicides, disappearances, murders and serial killers. The hotel made news in 2013 when the funny tasting water coming out of the faucets was linked to a dead body in the water tower. A disturbing video related to this death has gone viral. You might want to turn on the lights for this episode as we explore the history and hauntings of the Cecil Hotel.

The Cecil Hotel is located at 640 South Main Street in downtown Los Angeles, California. It was built in 1924 in the Art Deco style and originally had 700 rooms and was known as Hotel Cecil. It was built by hotelier William Banks Hanner. The hotel was large and cost one million to complete. Hanner put his brother Paul in charge of managing the hotel. The hotel was meant to be a place of comfort for business travelers. The lobby was beautiful with stained glass and marble tiled floors. The Great Depression hit hard and before long, the Cecil Hotel became a flop house. It also did not help that the area where the Cecil was built was well on its way to becoming Skid Row. Transients became the main tenants and to this day, the hotel is advertised as a low budget option. New owners refurbished parts of the hotel in 2007. Reviews are mixed, but it seems to be your standard hostel for European travelers with some of the now 600 rooms set aside for long term living. Standard hostel, except for its bloody history that has earned it a reputation.

The Cecil Hotel was home for two serial killers. The Night Stalker, Richard Ramirez, lived in a top floor room. He robbed, raped and killed in Los Angeles from June 1984 to August 1985. He used all types of weapons from knifes to guns to hammers to commit his crimes. He claimed his crimes were because of the Devil. He was an avowed Satanist. He was sentenced to death in thirteen murders, but died of lymphoma while in prison in 2013. Jack Unterweger was an Austrian who murdered three prostitutes in 1991 while staying at the Cecil Hotel. The prostitutes came to his room there. He had already killed several people in Austria by this time. The insane part of the Unterweger story is that Austria declared him rehabilitated. He was hired by a magazine and sent to Los Angeles as a crime reporter. He was intrigued by the Night Stalker and claimed that his murders were an homage to the other serial killer. Some rehabilitation!

The deaths at the Cecil Hotel have been numerous.  Murders occurred in the 20s and 30s even before the hotel started its decline. It is claimed that the Black Dahlia was seen hanging out at the bar at the Cecil before she disappeared in 1947. A woman named Goldie Osgood had worked as a telephone operator. She called the Cecil Hotel home. She was known for feeding the pigeons in Pershing Square, so people nicknamed her "Pigeon Goldie." On June 4, 1964, Goldie was discovered dead in her hotel room by a man delivering phone books. She had been raped, stabbed and strangled. The room was torn apart. A short time later, a twenty-nine year old male was found in Pershing Square with bloodstains on his clothes. His name was Jacques B. Ehlinger and he was arrested. He could not be tied to the murder and so the police had to let him go. No one was ever prosecuted for Goldie's death.

The suicides began in the 1950s. Helen Gurnee, who had registered at the hotel as Margaret Brown, ala Molly Brown, stepped out from her seventh floor window and crashed down onto the hotel's marquee, dying instantly on October 22, 1954. Julia Moore had traveled by bus from St. Louis, Missouri and decided to stay at the Cecil Hotel. She stepped out of her eighth story window on February 11, 1962. And on October 12, 1962, Pauline Otton jumped from her ninth floor room after arguing with her estranged husband. He left for some dinner and she jumped. Unfortunately, George Giannini was taking a stroll right outside the hotel and when Pauline fell she landed on top of him, killing him instantly.

And then there is the story of Canadian Elisa Lam. Elisa had stopped at the Cecil Hotel on her way to Santa Cruz. She went missing. The only clue about what may have happened to her was the following CCTV video below:

In the video Elisa seems to be acting oddly, as if she is afraid of something. Almost as though she were being pursued. She moves her arms in odd ways and steps on and off the elevator. The elevator never closes its doors or moves while she is in the camera's view. After patrons complained of ill tasting water and low water pressure, a hotel worker discovered Elisa's body in the water tower.The rooftop is locked, so no one knows how she got there or if she somehow entered the water tower herself and drowned. No drugs were found in her body.

This incredible history has left many to claim that the hotel is cursed and haunted. Photos have captured ghostly images at the hotel. One such picture was taken from outside of a fourth story window: 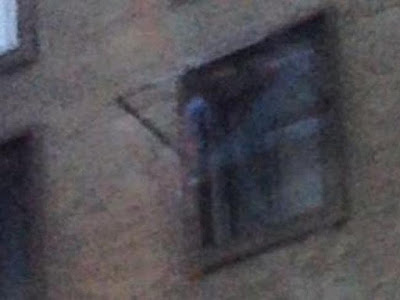 The photographer claims that he had a creepy feeling and felt compelled to take a picture of the window. He started having nightmares after taking the picture. Doors open and close on their own as do the elevator doors. Many people who stay here claim to feel an oppressive pressure. Chairs and furniture are moved. Employees report sounds, particularly of doors when no one is in the area. Guests in one room claim that they feel as though they are getting strangled. None of them stay for the entire night.

Bio Channel's reality paranormal show Haunted Encounters: Face to Face visited the Hotel Cecil in 2012. A psychic for the paranormal group felt something in the hotel and saw movement against a far wall in the basement. Her hair was pulled. A guy in the group was hit several times and the batteries for his camera were thrown to the floor.

One woman related her father's haunting tale from his stay at the Cecil Hotel on her blog MemoriesProject.com:


"Which leads right into my dad’s haunted hotel experience. Every time he told the story, I could feel the fear come off of him in waves, even after so much time had passed. He claims he went to sleep that night in his room, only to awaken to the feeling that he was being choked. He was bathed in a cold sweat and couldn’t move or call for help. He literally thought he was going to die in that room. Finally, the feeling left him. He bolted out of the room and went downstairs to the hotel clerk on overnight duty. After he gasped for breath, he told the clerk what had happened. The clerk said that in fact someone had been murdered in that room. I believe Dad was able to get his room changed, as he made it clear he would never sleep another moment in that room."

Is there a reason why so much death has happened here? Is the building cursed for some reason? Are people compelled to commit suicide or murder when they stay at the hotel? Is this just a typical Skid Row flop house? Is the Cecil Hotel haunted? That is for you to decide!
Posted by Diane Student at 5:02 AM