During medievel times, something unusual was discovered in a pit outside of a Suffolk village. Two children were in the pit and they both were quite odd. Ralph of Coggleshall wrote of the discover, "A boy was found, with his sister, by the inhabitants of that place, near the mouth of a certain pit that is situated there. In the shape of their whole bodies they were like other people, but they differed in the colour of their skin from all the mortal inhabitants of our world; for the surface of their skin was all coloured with a green hue." Another writer by the name of John Clark noted that the children "were dressed in clothing of an unusual colour, made of unknown material." Witnesses claimed the children did not know English and that they had unusual dietary habits. They both were adopted by a local Lord, but one of the children died. The other grew up and his coloring became a ruddy red. Some researchers have suggested that the children were anemic and this perhaps is why their skin had a greenish tinge. But the people of Suffolk probably all had anemic children and so this would not have seemed peculiar. The children could have had Carotenemia from eating too many carrots, which colors the skin an orangish green. There are theories that death comes in the shade of green and perhaps the children were close to death. One indeed did die. The horseman of death in Revelations is green. The children had been in a pit and the superstitious villagers assumed this meant they came from another world. Aren't martians green? While we'll never know why these children were green, the most curious things to us is how these children survived in this pit, how long were they in this pit, how did they get to this spot since they apparently were not locals and where were their parents? That is what truly makes this story odd.

On this day, June 19th, in 1778, General George Washington's Continental Army vacates Valley Forge after the British retreated. General Washington had brought 12,000 men with him to the valley seeking protection from the winter. The snow fell as they arrived and the Continental Army would endure a horrible winter. Food, clothing, weapons and every other supply was scarce. Supplying Valley Forge was not only difficult, but politics got in the way. The Continental Congress could be as inept as our modern day Congress, but some of the men were also fighting in the war, so appropriating funds and supplies took time. The British blocked supplies as well. Fevers, small pox, typhoid and dysentery killed many of the men. General Washington wrote in a letter to Governor Clinton of Pennsylvania, "As naked and as starving as they are, we cannot enough admire the incomparable patience and fidelity of the solider." The Continental Army got their second wind after leaving Valley Forge and they defeated the British at Monmouth. They marched on to Yorktown where they defeated the British one more time, ending the war. 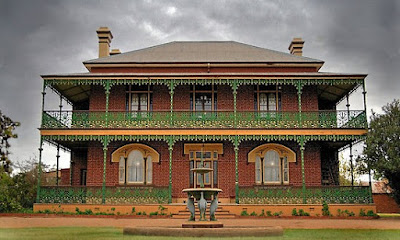 The Monte Cristo Homestead is considered to be the most haunted house in Australia. Today, we are joined again by our friend from Down Under, Freya, and we are going to share the history and hauntings of this beautiful home in New South Wales.

The Monte Cristo Homestead is found in the town of Junee in New South Wales. The name Junee is derived from the Aboriginal word for frog. A group of indigineous Aboriginals named the Wiradjuri lived in the area. These people were hunter, fisher, gatherers. Leopold de Salis was one of the first Europeans to travel to the area and he set up agriculture in the area and helped establish the town, which opened its first post office in 1862. By 1866, the population of Junee was...twelve. The Main South Line Railway had a line that was built five miles outside of Junee and this lead to expansion of the town. Junee became an important stop on the line and the town was moved closer to the railway with a new post office opening. Government was formed in 1886 and a courthouse was built in 1890.

Freya shared the following information with us:


"The land on which Monte Cristo was later built was originally owned by Christopher William Crawley, who acquired a 400 acre then a 120 acre area of land around 1876 that is now known as Junee. After struggling for many years with farming, Mr Crawley built a hotel (possibly on a well placed tip off) across from the railway station on the newly built Great Southern Railway Line. The hotel was a great success as the tiny township experienced an influx of travellers from the railway, promoting its rapid growth. Mr Crawley's wealth grew tremendously, and at the height of his power he owned almost the entire area of Junee and was obviously named a town founder. He was reportedly a naturally generous and responsible man, giving a parcel of land to build the church and funding to other community projects. In 1876 he built the grand house called Monte Cristo, where he lived with his wife Elizabeth and seven children.

While the Crawleys had a grand and amiable public life, their true nature is widely disputed. Many servants later reported harsh mistreatment at the hands of their employers, and many deaths occurred in the house. A maid was pushed (or jumped) off the balcony, a woman died in labour, a stable boy burnt to death, and a nanny threw a little girl down the stairs, although she claimed she was pushed out of her arms by an unseen force. Perhaps most disturbingly, the housekeeper's mentally disabled son was kept locked up in the outhouse (or the dairy, sources vary) for 30 years. Mr Crawley died in 1910 from heart failure, secondary to blood poisoning from a infected carbuncle on his neck. After this, Mrs Crawley, possibly ostracised from the community in her husband's death because of her suspected Aboriginal heritage, only left the house twice until her death 23 years later, converting the upstairs box room into her private chapel. The house remained in the family until 1948, when the last of the Crawleys vacated and Monte Cristo fell into disrepair. In 1961, the caretaker was shot dead by a local boy who'd been influenced by the movie Psycho, adding to the horrifying lore of the house. (He apparently scrawled "Die Jack Ha Ha" onto a door.)

The property was purchased by Reginald and Olive Ryan in 1963, who carefully restored the building while raising their five children there. Reg was dedicated to Monte Cristo, spooky history and all, and worked tirelessly on its restoration and development until his death in 2014. He once joked that he would be the next ghost to appear in the house, and that may be true now! The homestead is now open for house tours, dinners, overnight stays and of course ghost tours.

The paranormal activity in the house is said to be extreme, with everything from ghostly figures to animal mutilation on record. The Ryans had their first spooky experience a few days after moving in. Coming back up the driveway to the house after dark, Reg and Olive found the entire house blazing with light from the inside, as though every light were turned on, even though electricity hadn't yet been connected to the house. As they neared the house, all light was suddenly extinguished. Feelings of sadness, sickness or even not being able to breathe are common in certain rooms. Apparitions of Mr Crawley are common, but Mrs Crawley seems the more demanding of the pair, making her presence known around the house but particularly in the converted chapel. Pets will not enter the house, and a few chickens and a pet parrot were strangled in their secure pens.

Reg's nephew and his wife once stayed at the property and had a scare on a late night search for the loo. A woman in white (there's always one!) materialised on the landing before them and told them "Don't worry, it will be alright" before disappearing. Visiting children inexplicably throw tantrums on or near the stairs where the child thrown by her nanny was killed, and Olive once found mutilated dead cats in the kitchen. The bed in which the young woman died in labour is the only original bed on the property and is used in a guest bedroom (CREEPY IN ITSELF!) where some wake up feeling the residual pains of labour. Reg Ryan seems to have kept his promise of returning to his beloved homestead. He's sometimes seen in the old coachhouse, where he worked on restoring the Crawleys' coaches, and the family believe he is still watching over them."

The following experience comes from the Castle of Spirits website:


"As we moved along through the old coaches Mike, Eoghan and myself suddenly had the uncanny experience of feeling that something (not so good) was above our heads. We could see a large loft above with a ladder leading up to it and Mike took it upon himself to go to the ladder and start to climb up to the loft to explore what was up there.

We moved aside so as to not be underneath the loft and underneath the entity above us and watched as Mike was suddenly overcome by a force pushing him upwards. He allowed himself to be pushed up the stairs and was horrified to find a large open window upstairs with no barriers. He suddenly realized that this entity was pushing him towards the open window and we all shouted for him to come down the stairs immediately!.

Mike managed to return down the ladder but was amazed by the pushing force that he was subjected too. At the same time Mark Ferguson suddenly cried out and jumped into the middle of our small group, he practically climbed on top of me and you could see that he was quite terrified. He told how he was standing slightly aside from us, by himself in the dark when suddenly he had felt something lean up against his side and on his shoulder. We were all witness to the fact that nobody else was in contact with him and that his left side was clear of any coaches or other objects in the shed. Mark Ferguson found this too frightening as he had already been grabbed by the entity quite a few times since first entering the Coach House. It was apparent that this unseen entity was picking on him!. We could pick up nothing on film, EMF or anything else at this time.

Since I (Rowena) wasn't bothered by the entity I was the one who then to walk behind everyone with Mark Ferguson in front of me, giving protection to Mark Ferguson from the unseen annoyance he was experiencing and was terrifying him so much."


Are the spirits of servants and others still haunting the halls of Monte Cristo? Is Reg still keeping an eye on the place from the afterlife? Do things really go bump in the night and day at Monte Cristo? That is for you to decide!
Posted by Diane Student at 5:31 AM