The Sunday Capital printed a story in 1885 detailing some letters written by a dead man after he had died as follows: “A very remarkable case has come to my attention through a friend in the pension office which furnishes incidents for a novel as powerful as any Dumas or Eugene Sue ever used. In 1864 a lieutenant from an Ohio village was killed in one of the battles in Virginia and his body was sent home, buried with military honors and a handsome monument erected over it by the citizens of the place. Thousands of people paid their tributes of honor to the young hero and looked upon his face as the body lay in the town hall. He left a widow to whom he had been married only a year, and for more than twenty years she has been trying to get a pension; but, although she keeps fresh flowers upon her husband’s grave, she cannot prove that he is dead. The records in the adjutant general’s office are perfect, and affidavits can be furnished from thousands of people who saw and recognized his lifeless body, but every few months she receives a letter from him written in a hand as familiar as her own. Two letters never come from the same place; now they are postmarked in Colorado, then in Texas, then in New York. Once she got a note from him dated at Washington. He appears to know what is going on at home, and always alludes to local occurrences with a familiarity that is amazing. He sends messages to old friends and gives her advice about business matters which it seems impossible for a stranger to know. She cannot answer these ghostly missives, because he never gives any clew to his whereabouts, and no detective has ever been able to find him. Her friends believe that the writer is some crank or malicious person who takes this way to annoy her, and the distress the poor woman suffers cannot be measured by any other human experience. Long ago she ceased to open envelopes which came with the familiar address, but sends them sealed to her attorney, who uses every possible means to secure a clew to the identity of the writer. The only circumstances to suggest that it may possibly be her husband are the penmanship and the familiarity the writer shows with the lady’s private life, but how he could keep himself posted is another mystery, which cannot be solved. Several times the writer has intimated that he might soon pay her a visit, but the next letter always contains an apology for not having done so. The woman has suffered agony of mind beyond description, and her life has been ruined by this horrible mystery, but of late she has become more resigned, and would neither be surprised or disappointed if her husband should someday walk into her door.” Whether her husband was writing her from the grave or someone was playing around, the whole experience certainly was odd.

On this day, June 9th, in 68 AD, Emperor Nero ends his tyrannical reign at his own hand. The Emperor Claudius was grand uncle to Nero and he adopted the young man so that he could become his heir. Claudius had shared rule with Caligula, who had been one of the most evil leaders of all time. He had been murdered by members of the government to put a stop to his brutal ways in 41 AD. When Claudius was murdered by his wife in 54 AD, Nero became Emperor and ruled from 54-68 AD. Nero's reign was challenged by his mother at a later date and she pushed for Nero's step-brother to become Emperor because he was the true blood heir. Nero poisoned the boy. Nero ordered the murder of his mother in 59 AD. Nero would also have his wife Octavia executed after their divorce, which he initiated because he had impregnated another woman whom he later married. That woman was kicked to death by Nero when she was pregnant with their second child. Nero drove the empire into debt with his lavish building, but many of the people loved him. In 64 AD, Rome burned and it is believed that Nero had the fire started. The saying that Nero fiddled while Rome burned developed during this time. Restoration challenged the treasury even more. Nero blamed Christians for the fire and had them executed. Nero began to take power away from the Senate despite promising them that he was pushing for a Republican government. In 65 AD, the Senate realized they had no power and they began plotting the Pisonian Conspiracy. This conspiracy consisted of a plan by Gaius Calpurnius Piso to have Nero assassinated with the support of the Senate and then become Emperor. It failed and those involved were executed or forced to commit suicide. The Senate called for Nero to appear before them and were preparing a way to have Nero's life preserved after a rebellion arose among governors. Nero had been abandoned before this by everyone including his guard, so he thought that the Senate was going to torture him to death. He decided to commit suicide, but he chickened out and begged his private secretary to help kill him, which he did. 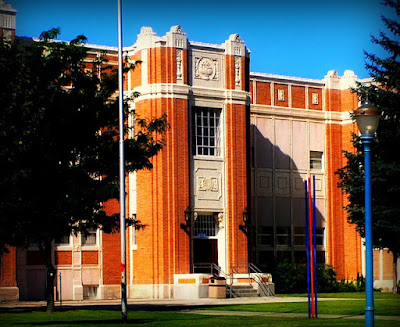 Pocatello High School in Idaho is a beautiful historic school that has made the top ten on a very unique list. Pocatello is one of the top ten scariest high schools in America! There is more to this revelation than just whispered rumors among students in the hallways. Closed circuit TV has picked up strange anomalies. One would think a school in Idaho would not be a place where multiple deaths have occurred, but Pocatello is different. One of the deaths was even part of a twisted suicide pact. Come with us back to school as we explore the halls and classrooms of Pocatello High School.

The city of Pocatello is known as the Gateway to the Northwest. The Shoshone and Bannock tribes had lived in the area for hundreds of years. The leader of the Shoshone was Chief Pocatello and that is how the city derived its name. Fur traders were the first white men to come through the area. Nathaniel Wyeth was a Massachusetts businessman who headed west leading two expeditions to the Pacific Northwest. He saw great promise in the areas of agriculture, fishing, fur trading and lumber for the area. The second expedition led to Wyeth establishing Fort Hall in the area in 1834. He promoted the Oregon Trail heavily and helped Methodists missionaries on their way to Oregon. He would finally head back to Massachusetts for good in 1836 after giving up on his expedition due to unforeseen circumstances. He was not as prepared as he needed to be and fur trading was dying because silk had become the preferred hat material.

Fort Hall still held onto its prominence after the fur traders moved out because so many settlers were heading for the northwest. The discovery of gold in 1860 convinced people to stop travelling through the area and to stay and settle. The Portneuf Valley, of which Pocatello is a part, became a hot spot where stage and rail lines came through. Union Pacific Railroad founded Pocatello Junction. By 1882, the place was an agricultural center that grew grain and, of course, potatoes. In 1889, the town of Pocatello was founded.

Many of the historic buildings from Pocatello's earliest days still exist today. One of those buildings is Pocatello High School. The school was built in 1892 and named West Side School. The building featured a belfry, gables and arched windows. All grades attended classes in the school. The school was a matter of pride for the city and because of this, two presidents spoke at the school. Those presidents were Theodore Roosevelt in 1902 and William Howard Taft in 1908. The school thrived until 1914, when a fire broke out. A boiler had apparently started the fire. Students and teachers rushed to save what they could and the fire department arrived on horse drawn carriages. It was no use. The school was completely destroyed, burned to the ground. 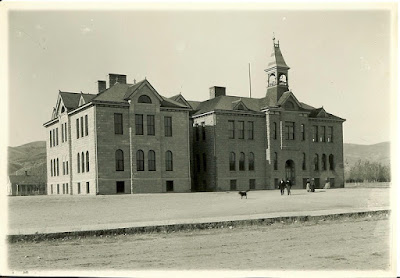 The town decided to rebuild the school in the former's footprint. Students met on the lawn and in churches while they waited for the new school to be built. That new school was finished in 1917. The school was expanded in 1939 and a gymnasium was added. Major renovations were done in 1996 and a new gymnasium was completed in 2006. The school would seem to be a typical high school, until one hears about the supernatural occurrences that have been experienced within the school.

A peculiarity of this high school is that a real skeleton was used in science classes. Obviously, the school decided this was not a good idea and they switched to using a plastic skeleton. Apparently, the spirit behind the skeleton was not happy about this switch. Science teachers started finding bones from the real skeleton tucked inside cabinets and in other places within the science department.

It was in the 40s or 50s when two girls at the school decided that life for them was over. They made a pact with each other that they would commit suicide. Only one of the girls went through with the plan because the other chickened out. The girl who followed through with the horrible plan, hung herself from her locker. She wore a distinctive perfume that is smelled in the hallways to this day. The most intense scent came from her original locker. It got so bad that her locker was finally removed. Custodial staff sees a young girl's apparition in the hallways at night.

On several occassions, the tinkling of piano keys has been heard coming from the music room at night. When someone goes to investigate, there is never anybody found playing the piano. Toilets flush on their own when no one is in the restrooms. The same thing happens with the lights. They are repeatedly turned on and off and it gets so intense that police are called. The closed circuit video that caught our attention features this light phenomenon. The video is considered to be the real deal because surveillance tape cannot be altered. The video also features what appears to be an apparition and although some claim it could be something hanging from the front of the camera like a thread, the movement seems a bit too much like a human walking to convince us it is just a string.

There are other stories that we are not sure are true. One story claims a librarian hung herself from a chandelier in the library. Another story claims a boy drowned in the pool. The theater is very haunted according to some staff and students. A girl or a large shadow is seen sometimes in the rafters and the story behind this haunting is that a jealous understudy strangled the girl in the locker room below the theater and took her place in the play. Whispers are heard throughout the school and no one is found in the areas from which the whispering originates.

For more video behind the story: http://features.aol.com/video/idaho-high-school-haunted?icid=maing-grid7|main5|dl20|sec1_lnk3%26pLid%3D593860

Posted by Diane Student at 6:33 AM