The last Saturday in February of every year is officially World Sword Swallowing Day. Events are hosted at the various Ripley Odditorium locations around the world. Sword swallowing is an ancient practice with origins in India dating back to 2000 BC. Shaman and priests were the first to practice the art of sword swallowing and they used it not only to awe crowds, but to  make people think they held special powers. While special powers are not involved, special skills are required. Sword swallowers need to learn how to master their bodies, particularly their gag reflex, both externally and internally and they must maintain focus. Most train themselves slowly using fingers and small objects to master the gag reflex and then dull short swords are used as the performer works up to longer swords that can reach 25 inches in length. Performers lubricate the swords with oil or saliva and sometimes they will eat a large meal to distend the stomach. Sword swallowing spread from India into the Far East and throughout Europe, where the practice was condemned by the Catholic Church. Street performers continued the practice anyway. Sword swallowing came to America in 1817 in an exhibition hosted in New York with Indian Fakir Senaa Samma performing. The art then became a regular part of side show oddities and Vaudeville shows. The Chicago World's Fair also presented sword swallowing. This is a very dangerous practice with swords passing within centimeters of vital organs and it is stunning to witness. And, of course, a bit odd.

This Day in History - Internment of Japanese-Americans Condemned

On this day, February 24th, in 1983, the Commission on Wartime Relocation and Internment of Civilians that had been established by Congress in 1980, issued a report about a black spot in American history: the internment of Japanese Americans during World War II. The Congressional Commission report condemned the action and stated that it was a ''grave injustice'' that came from ''racial prejudice, war hysteria and failure of political leadership.'' The report also found that the relocation and internment of Japanese Americans was not only unnecessary when it came to the military and security, but that President Roosevelt deserved most of the blame. The Japanese celebrated the report by printing the story about the report on the front page of all of their newspapers. Asians had endured much discrimination over the decades as they immigrated to America, but it intensified after the empire of Japan attacked Pearl Harbor on December 7, 1941. President Roosevelt authorized Executive Order 9906 on February 19, 1942, which gave General DeWitt, who commanded the West Coast area, authority to do pretty much anything he wanted with the Japanese Americans. It began with curfews, which evolved into internment in detention camps. Enforcement stopped in 1944 and the last camp was closed in 1946. Executive Order 9906 was not officially rescinded until President Ford revoked it in 1976. Nearly 120,000 people of Japanese ancestry were interned during World War II. 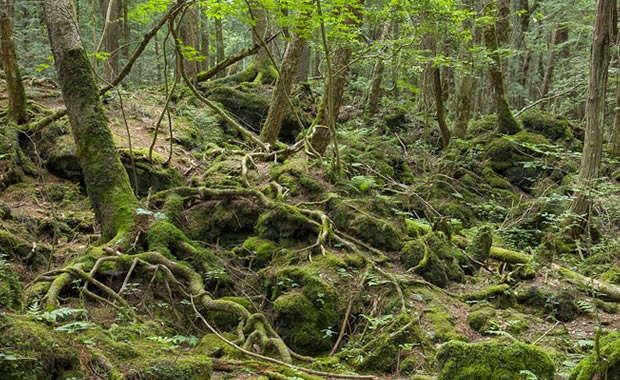 At the base of Mount Fuji in Japan lies a forest that is 14 square miles in size and is referred to by some as the Sea of Trees. The forest's official name is Aokigahara Forest and is known for being very quiet. Aokigahara is notorious though for its reputation as a place people go to die by their own hand. Most people call this wooded area "The Suicide Forest." There are rumors that demons run the place. And the tales of hauntings are numerous.

Mount Fuji is the highest mountain in Japan and it is a dormant volcano. It has not erupted since the 1700s, but through its previous eruptions it formed a bed of volcanic rock that the Aokigahara Forest sprang from. The floor of the forest is so hard that it is difficult to use a shovel or pick to dig.The trees are thick and twisted and very little animal life lives in the forest and no birds are ever heard singing. The tree roots snake across the surface of the forest floor like fingers reaching out to curl around visitors, never allowing them to leave. The forest is treacherous to walk through at times with areas being cloaked in almost total darkness and caves dot the landscape hidden so well in the topography that people could easily fall into them. The terrain is rocky and uneven. Hikers often get lost here. Some carry tape with them to mark their way as though in a modern day fairytale about Hansel and Gretel.

Suicide is a permanent solution to a temporary problem. It is never the right solution. Nearly one million people make that choice every year. Some people choose to go quietly while others choose a more grandiose exit. There are places on Earth that have earned reputations as great places to die. These places include the Eiffel Tower, the Nanjing Yangtze River Bridge, Niagara Falls and the Golden Gate Bridge. Aokigahara Forest usually ranks one or two on a list of places to die with nearly 108 suicides every year. Most forest trails have signs indicating the distance to different spots along the route, but at Aokigahara suicides are so prevalent in the forest that signs have been erected all over inside of it encouraging people to live and seek help. Annual body searches have been carried out since the 70s. The Japanese have a certain practice they follow when a body is found in the forest. The body is brought to a special room in a building near the forest. Someone remains in the room as a type of sentinel, not even leaving at night. As one might imagine, the job of staying overnight with a dead body is not one that most people want. The guards actually play rock-paper-scissors to see who will get stuck with the duty. It is important to have a guard or else the ghost of the dead person might haunt the building, screaming and acting deranged.

Why has suicide become so popular here? Some blame a 1960 novel by Seicho Matsumoto named in English "Black Sea of Trees" with a plot featuring young lovers who commit suicide in the Aokigahara Forest. The lore of the forest goes back much further than the 60s and is steeped in Japanese culture. The Japanese used to follow a tradition called ubasute, which loosely translated in English means "abandoning an old woman." During times of famine and sometimes at other times, the elderly and infirm were taken high up on mountains or into forests and they were left to die of exposure and dehydration. It is believed that Aokigahara was one such location where ubasute was practiced. A Buddhist poem tells one such story:


"In the depths of the mountains,
Who was it for the aged mother snapped
One twig after another?
Heedless of herself
She did so
For the sake of her son."

Suicide holds a unique place in Japanese culture as well. Japan's suicide rate is the eighth highest in the world. Current trends of suicide have been blamed on economic hardship and work demands, but suicide has long been considered a noble act in Japanese culture. Kamikaze pilots helped lead the Japanese to many victories. These pilots did not fear death, so they would take on very risky missions and after dropping their bombs, they would turn their planes into missiles by flying them directly into targets on purpose, killing the pilot.

The Samurai practiced honorable suicide, which is seppukku in Japanese. If the Samurai was unsuccessful in battle or meeting certain death, he would use a knife called a tanto that had a short blade and slash open his abdomen with a side to side motion. The act was thought to release the Samurai warrior's spirit onto the enemy and prevent any kind of dishonorable execution or torture. The Samurai would also practice seppuku if he brought dishonor upon himself or did something offensive to the group. If seppuku took place outside of battle, there was an elaborate ritual connected, which usually included a second who would cut off the head of the Samurai. The Samurai's wife would also kill herself by slashing her own throat. Women were taught how to do this as children. It was not only considered honorable, but was also done to prevent rape. She would tie her knees together, so that she died in a dignified pose.

Minamoto no Yorimasa is the first person to have practiced seppuku in recorded history. He was a poet, but also a warrior. The Minamoto part of his name represents the clan he belonged to and he lead the Minamoto army in many battles. It was during the Battle of Uji in the Genpei War in 1180 that Yorimasa took his own life. The temple he was defending was taken by a rival clan during the battle. He was shamed by the defeat. Seppuku was used for capital punishment as well and was not abolished until 1873. The last notable case of seppuku happened in 1970. Author Yukio Mishima tried to form a coup d'etat, but was unsuccessful. He went to the office of General Kanetoshi Mashita and sliced open his abdomen there while his second, Masakatsu Morita, tried to cut off his head three times. Another man finally finished the deed and then helped Morita with his own seppuku.

When it comes to hauntings at Aokigahara Forest, Japanese spiritualists and paranormal investigators believe that the spirits of those who have committed suicide or been left to die in the forest are absorbed by the trees leading to paranormal activity. Skeptics might be quick to point out that the volcanic floor of the forest contains magnetic iron, which can cause compasses to go haywire and could give people a weird feeling, but the military has proven that GPS and compasses work just fine while in the forest. Is it possible that such a hotbed for death could be cursed? Could the darkness that permeates suicide and abandonment possibly call out to dark forces?

The Japanese have lore about ghosts they call Yurei. These Yurei are angry or sad spirits. These spirits reportedly come from those who have been murdered or commit suicide and thus have not had either proper burials or good deaths. Emotions like hatred and loneliness or an overwhelming desire for revenge cause souls to be trapped on this plane and unable to leave. Japanese legends claim these souls are left to wander. White forms have been seen gliding between the trees, some possibly beckoning to those who have chosen this place to die. Yurei are heard howling in the forest. People claim that faces can be seen in the bark of the trees. EVPs have been captured as well as ghost pictures along with strange lights. Objects that are set down reportedly move on their own. Hikers claim that the trees feel as if they are pressing in on them and that they move as well.

Do the trees live in Aokigahara? Do they soak in the spirit and energy of those who have died and the negativity around them? Is this forest the home of demons? Is this forest haunted? That is for you to decide.