Moment in Oddity - The Skunk Ape

In the remote areas of the swamp and the Everglades in Florida, lives a variation of the creature commonly called Sasquatch or Bigfoot. This hominid cryptid variation is known as the Skunk Ape. And yes, it did acquire that name based on its repulsive stench that some claim is a cross between garbage and skunk spray. The Skunk Ape is hypothesized to live in caves that are dank, which may be the cause of its stench. Supposed sightings of the elusive creature detail a seven foot, upright walking beast completely covered in long black or reddish hair. The eyes of the creature reportedly glow red. Sightings of the Skunk Ape began in the 1960s and continue to this day, with the most recent highly reported pictures being taken in 2000 by an anonymous woman who sent the pictures to the Sarasota Sheriff's Department in Florida. The National Park Service claims that any such sightings are hoaxes, but indigenous tribes that live in the areas where the Skunk Ape has been seen, claim that the cryptids are real. Does the Skunk Ape actually exist? If it does, it certainly is a mysterious and odd creature.

This Day in History - The Larchmont sinks killing 150

On this day, February 11th, in 1907, the passenger ship Larchmont sinks off of Block Island in Rhode Island. The Larchmont had left Providence at 7 o'clock. The ship was on course with smooth sailing and no signs of trouble. Around 10:45pm, that all changed when a schooner that was out of control of her crew approached the Larchmont. A siren of warning was sounded. The Larchmont tried to pull away, but it was too late.  The schooner slammed into the port side of the Larchmont before falling away and disappearing.  The Larchmont began to take on water rapidly.  Everyone was ordered to abandon ship and the lifeboats headed for Block Island.  Capt. McVey wrote about the experience, "The cold was terrible. We struggled for hours and hours, and the pain from our frostbitten hands and feet was almost unbearable. One of our men, a seaman, became crazed and committed suicide in the boat by cutting his throat. No one in the boat had strength enough to prevent him from doing it. We arrived here at 6:30 o'clock in the morning, very much exhausted and frozen." The captain of the schooner blamed the Larchmont for the accident. He claimed the steamship came towards them and seemed to not see the schooner's lights. By the time the captain realized that the Larchmont was not going to steer away, it was too late. The schooner sank as well. Nearly all the inhabitants of Block Island joined the efforts to rescue victims and recover bodies the next morning. A survivor from the Larchmont claimed the Captain and crew abandoned the passengers. Only nineteen people aboard the Larchmont survived of 169 passengers, so it would seem that the old adage that the captain goes down with the ship was not true here and that perhaps the crew really did save themselves. In the end, 150 people lost their lives. 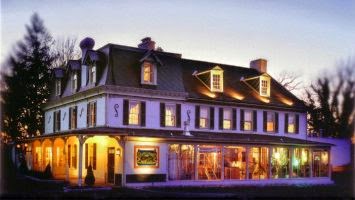 Barren Hill Tavern and Brewery has only been open for a couple of years, but the history behind the building that this warm eatery is housed within has an extensive history.  Some people who come to this establishment, that is located on the outskirts of Philadelphia near the Barren Hill Battlefield, get more than just a nice meal and the chance to sample an originally crafted beer.  Some of them have an experience with the unseen.  The former General Lafayette Inn might still be playing host to guests that decided to never leave.

Barren Hill Tavern is located in Lafayette Hill, Pennsylvania.  The town was named for French General Marquis de Lafayette who spent time in the area during the American Revolution.  Lafayette was a French aristocrat who fought with the rebels during the American Revolution and he was a close friend of several of the Founding Fathers.  Lafayette had been commissioned as an officer at the tender age of 13 in his home country of France.  He came to America and was commissioned as a general when he was just nineteen.  He would be wounded at the Battle of Brandywine and play a major role in the Siege of Yorktown.

In May of 1778, General George Washington sent General Lafayette to Barren Hill with 2,200 men to do some spying. This seems like a large group for reconnaissance and indeed the British soon found out about the group and surrounded them on three sides. Lafayette's force was nearly one third of General Washington's army and thus they could not afford to be slaughtered. General Lafayette climbed the tower of the St. Peter's Church, which was right next to the Inn, and he mapped out a plan for escape. The British far outnumbered Lafayette and he ordered a retreat.  He knew in order to put up a better fight and succeed in retreating, he needed to convince the British that they were dealing with a bigger force than what Lafayette actually had.  He ordered his men to spread out on the future Lafayette Hill and fire sporadically from different spots.  The group then backed away through a sunken road where they were not easily seen and they made it across Matson's Ford safely.  The British headed for New York and General Lafayette came up from the rear, successfully attacking the British in New Jersey.

The original building that would later house inns, restaurants and breweries was built in 1732. In 1752, Christopher Rapine bought the property and named it the Three Tuns Inn. General William Smallwood and General William Hull are believed to have used the Three Tuns as their headquarters during the Revolutionary War.  They joined General Lafayette in spy operations on the British before the Battle of Barren Hill.  After the Revolutionary War, the Inn needed extensive repairs and it was expanded.  Fireplaces were added to the first and second floors in corner spaces, which was unique for the time.  Marble from the Old Blue Quarry was used to make the mantles. Ludwig Dager owned the Inn during these renovations and the property was kept in the Dager family until 1825 when John Hagey took over the inn and renamed it "Trooper." In 1828, the property went back to the Dager family until 1869.

George and Leonard Fisher bought the property and changed the name yet again to the Barren Hill Hotel. In 1874, a horse drawn trolley line was built from Philadelphia and the hotel saw a resurgence in business. It was at this same time that the property found itself in the hands of another owner.  James Mehwhinney kept the building until 1895. Lottie Gundlack owned the hotel until 1946.

Ludwig Zackiewicz bought the hotel in 1946 and changed the name to Lafayette Hotel, naming it for General Lafayette.  The hotel faced demolition in 1958 to make way for a gas station, but Ludwig saved it.  He sold the building to Todd Helmetag and convinced him that restoration would be a plus and that if he made improvements, the hotel would thrive.  Ludwig was right and the Lafayette did very well for the next thirty years. From 1961 until the1990s, the Mustin family held the property.

Mike McGlynn bought the property in the early 1990s.  McGlynn believed strongly in preservation and he began extensive restoration on the building.  By 1996, the old building was ready for business again, this time under the name the General Lafayette Inn.  It was at this time that the microbrewery was added.  In 1999, a bed and breakfast was added.  Because of his love for the history, McGlynn began hosting events to commemorate General Lafayette's escape and the local soldier return from the Battle of Germantown.  McGlynn died of cancer in 2003.  The Inn's brewmaster, Chris Leonard, took over ownership in 2004.  The place was never the same though.  The General Lafayette Inn went into bankruptcy and closed in 2010.

Erin Wallace is a restauranteur who is unique in the world of brewery ownership since she is female.  Besides owning Barren Hill Tavern, she also owns Devil's Den in South Philadelphia and Old Eagle Tavern in Manayunk.  She bought the former General Lafayette Inn in 2013.  She poured $1.5 million into renovations before opening the Barren Hill Tavern and Brewery.  And that is what this historic inn and restaurant is today.

With such a vast history and with a location in the heart of some of the American Revolution battles, it is not surprising to hear rumors of hauntings taking place at the building. An older woman is one of the more prominent ghosts rumored to be at the building. When the location was still the General Lafayette Inn, an older woman's full bodied apparition would be seen walking in the smaller upstairs dining rooms. She also communicated with investigators via Ouija boards. There are claims that a woman was killed in the building, but we found nothing to substantiate that.

One night, after closing, two waitresses were organizing the chairs and they came upon a chair that would not budge no matter how hard they tried.  They both felt as though someone unseen were sitting in the chair.  They asked a manger for help and he lifted it quite easily as though whoever had been sitting in the chair had gotten up. On another occasion, a chair was witnessed tipping up on one leg and twirling in the pool room.

Doors have slammed and their knobs have rattled.  Former owner Mike McGlynn claimed that when he would be in his office doing paperwork with the door closed, he would hear the doorknob jiggle as if someone were trying to come in, but when he would look at the knob it would not be moving. No one would be at the door when he opened it. Disembodied footsteps can be heard throughout the building.  Full bodied apparitions have been seen.

In 2007, a bar patron was leaving the tavern around 1am and he claimed to see the apparition of an old hunched over man wearing a white nightshirt moving from the host stand towards the kitchen. A bar tender did not see the spirit, but he did see the patron's face and how white his face became.

A former brewmaster named Russ Czajka tells the following experiences, “I’ve had a couple of experiences, but just hearing things.  I was here one morning, early, by myself.  Actually there was one person in the kitchen.  And I had gone up into the attic to get some stuff for a beer festival.  When you come out of the attic there is a swinging door and a long hallway before you come down the back kitchen steps.  I came out of the door and down the hallway.  And when I made the turn to come down the steps I heard someone walking behind me.  I stopped, went back to look in the hallway and there was nobody there.” At the time, only Russ and one other employee were in the building.

Paranormal investigators had been allowed to investigate the building when it was the General Lafayette Inn and many groups claim that they captured orbs on film, had weird feelings in the building and experienced battery drains. As far as we know, no investigations have been made in the building recently and the new owner seems indifferent to talk of ghostly experiences.

The Barren Hill Tavern slipped through the hands of many owners in its nearly 280 years of existence. Are some of those owners still hanging around the property? Are there ghosts hanging out with the patrons and employees at the tavern? Is this place haunted? That is for you to decide.
Posted by Diane Student at 5:24 AM