Located in the Nazca Desert of Peru are unique and peculiar designs that have been carved into the reddish earth of the area leaving behind white lines that form the Nazca Lines.  The lines consist of 4 to 6 inch deep trenches and form geoglyphs that resemble animals, trees, flowers and humans, while other lines are geometric shapes or just simple straight lines.  It is believed the Nazca Culture created the geoglyphs between 400 and 650 AD.  Many of the designs are quite complex and they are so large that they can only be seen from high above on either the foothills or in the sky, leading many to wonder how an indigenous people were able to create the lines.  Were these people far more advanced than we think and they were able to fly?  Did UFOs have something to do with their creation?  Others wonder the purpose of the designs.  Some scholars believe that they have religious or spiritual significance.  Were the geoglyphs made for the Nazca People's sky gods?  In 1985, Archeologist Johan Reinhard hypothesized that the Nazca Lines were sacred pathways to places of worship.  Other scientists believe the symbols are reverse constellations.  No one knows for sure the purpose of the lines or how they were made, leading the Nazca Lines to be grouped in with other mysteries of the world.  The Nazca Lines are not only mysterious, but they are rather odd.

On this day, February 7th, in 1894, the Western Federation of Miners begins a strike in the city of Cripple Creek in Colorado.  The price of silver had crashed in 1893 and this launched the Panic of 1893.  But gold
still held much value and gold is what they were mining in Cripple Creek.  Miners flooded the area after silver crashed and over 150 mines were opened.  Labor was easy to come by, so mine owners took advantage.  They worked the miner's for long hours and offered no extra pay.  When the miners complained, the greedy mine owners gave them an insulting offer:  they would go back to eight hour work days, but miners would lose $.50 a day.  This would take their pay down to $2.50 a day.  The miners went on strike.  These were the days when strikes consisted of more than walking or standing with signs in front of a place of business.  Strikes got dangerous and deadly.  The mine owners raised a private army and the miners armed themselves in return.  The miners even built a fort.  Attacks were in the form of fires and dynamite explosions.  The state militia entered the conflict in June and took the side of the miners and the situation was tamped down.  This was a major victory for the Labor Movement and the Western Federation of Miners became very powerful. 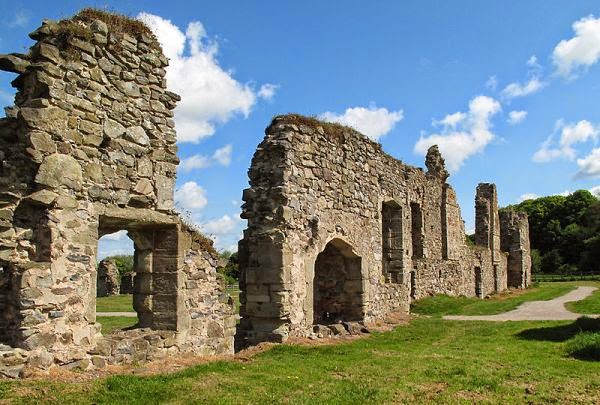 In Leicestershire, England the ruins of a religious settlement can be found that was once the Grace Dieu Priory.  Despite the fact that not much of the stone structure still stands today, people from all around the world come to visit the site for various reasons.  Some are tourists interested in the history.  Other visitors are interested in the esoteric and come to the ruins seeking the spiritual.  They believe the ruins lie on top of ley lines.  Still others come because of their interest in things unseen.  Reportedly, the stones of the priory are not the only vestiges still here.  The spirits of those who have come before seem to remain.  Grace Dieu Priory is haunted.

Grace Dieu Priory was established as an independent monastery of the Augustinian Order.  This order was named for Augustine of Hippo.  The order was split into different factions, one of which followed the Roman Catholic religion and was called the Rule of St. Augustine.  The members were strictly female.  These women formed different communities of Augustinian nuns.  One of these orders came to live at Grace Dieu Priory and they were called the White Nuns of Augustine.  They were the only order that had that name.

The Priory was founded by Rohese de Verdun some time between 1235-1241.  Rohese was born in 1204 in Staffordshire, England.  Her father was Nicholas de Verdun and he owned a large amount of land around Belton.  The land that the Priory would be built upon was originally given to Nicholas by William Wastneis, who was the lord of the manor of Osgathorpe.  Rohese gave the land for the building of Grace Dieu Priory and the Bishop of Lincoln gave the Priory its charter in 1241 and dedicated it to the Holy Spirit and St. Mary.  Rohese died in 1246 and she was buried in the Priory Chapel.  An eternal light was kept at the tomb.  The tomb including Rohese's body was moved to the parish church at Belton during the Dissolution.

The Priory grew to be rather large with sixteen nuns living at the monastery and a hospital was built next to the Priory.  The nuns were forbidden to leave the monastery.  The Priory was never wealthy, but it was undervalued in 1536 by the King's representatives, which put it in danger of being closed.  It was given a reprieve that ended in 1538 and the Grace Dieu Priory was dissolved.

William Wordsworth wrote of the Priory:


“Beneath yon eastern ridge, the craggy bound,
Rugged and high, of Charnwood’s forest ground,
Stand yet, but, Stranger, hidden from thy view
The ivied ruins of forlorn Grace Dieu,
Erst a religious House, which day and night
With hymns resounded and the chanted rite.”

John Beaumont bought the property in 1539 and converted the monastery into a home, which stayed in his family until 1684.  Sir Ambrose Phillips bought the home and within a short time, he had pulled down most of the buildings.  The site passed down through the Philips family and in 1833 a descendant named Ambrose De Lisle built a home 300 yards from the Priory ruins.  Grace Dieu Manor stayed in the family until 1964 when the home became a Catholic school.

In 1996, the Grace Dieu Priory Trust was formed by a group of people who wanted to conserve the ruins of the site.  The Rosmisian Order owns the property and has leased the area to the Trust.  Architects were brought in to solidify the structure and make it safe for visitors.   The site is now open for public touring as well as ghost walks.

Grace Dieu Priory is situated near the Thringstone Fault, named for the nearby village of Thringstone.  The geological fracture in the earth is below the ground.  There is a theory that the crack in the earth somehow interferes with the electromagnetic field and thus EMF detectors are affected and people sometimes get that "weird" feeling.  There are traces nearby of what appears to be a worship area for pagan practices.  In particular, there is a standing stone.  Standing stones are part of the Pagan practice of setting up a type of pillar to worship before.  Archeologists believe that the only remaining standing stone is part of a circle of fourteen that had once existed here.  The Catholic Church liked to build their structures over pagan sites, so is this perhaps why this particular spot was picked for the Priory.

It is claimed that a ripple of energy lies below the surface as well leading some to claim that the Priory is located above or near ley lines.  A ley line is a point where several historical, spiritual or other structures are located near each other.  For example, Stonehenge and the Great Pyramid supposedly are on ley lines.  Ley lines are mystical and work much in the same way as Feng Shui is suppose to work, guiding energy in certain directions. These lines criss cross the globe and they also have been connected to unexplained or supernatural occurrences.  Ley lines are sometimes described as pathways that have been tread many times like the Oregon Trail in America.  Corpse roads were these lines that wove the same path to the cemetery.  Is it possible that residual hauntings are following these well worn pathways?  And if something is built over that ley line, would that cause a ghost to haunt that place?  All of this is purely speculation, but interesting to consider since Grace Dieu Priory has many tales of haunting experiences.

One such tale originates in the 16th-century.  A nun named Agnes Litherland had become pregnant.  This was quite the feat since nuns were suppose to be celibate and these nuns were restricted from leaving the Priory.  Agnes gave birth to this illegitimate child.  The child was drowned in the nearby pond and Agnes was punished by being walled up in a room in the Priory.  (A side note here is that there has been information that Agnes was given a pension and asked to leave the Priory.)  The ghost of a woman is seen wandering the property, probably looking for her baby.  And remember that these nuns were called the White Nuns, so you probably will not be surprised to hear that this woman is called the "White Lady."  The White Lady has no hands or feet in most of accounts told about her.  Charlie Gough, a former worker on the grounds, tells a story from 1948 of seeing a nun dressed in all white, wearing a wide brimmed hat.  The figure disappeared when Mr. Gough approached.

There have been sightings of a woman in grey as well.  A police officer saw a women dressed in grey with a hood, cross the road near the Priory.  She then disappeared.  And a worker at the site once felt a woman behind him, but before he could turn around, he was pushed forcefully from behind.  He turned white as a sheet and never returned to work.  As mentioned earlier, Rohese de Verdun was originally buried at the Priory, but her remains were disturbed and moved.  People claim that this female spirit is faceless and on at least two occasions, the specter has ventured across the road to a bus stop where a bus driver has stopped to pick her up only to have her disappear when either of them opened the bus door.  Is it possible that this woman in grey might be Rohese?

The sightings of either of these female looking spirits are numerous.  In 1990, the Lea family drove past the Grace Dieu Priory and saw a bright light coming from the bus shelter.  As they got closer, they saw that it was a woman with no facial features and no hands or feet, hovering above the ground.  In 1961, a police officer was walking his dog near the site and saw a figure dressed in a white hooded robe near the railway.  The dogs hackles were raised and it growled.  Vince Bell was riding his motorcycle to work in 1986 and saw a women dressed in a white robe cross the road near the Priory.

A vision of some sort has been reported featuring a large group of men and women sitting at a table to eat together.  The plates are made of metal.  A young boy plays a flute.  Companies of disembodied soldiers have been seen at the site as well.  And similar to one of the tales that occurred at Australia's Quarantine Station, one group of investigators felt a warm breeze come through their group before the cold night air returned.

People riding the Carnwood Forest Railway claim to have seen ghosts or felt sudden chills when stopping at the Grace Dieu Station.  Orbs and mists have been photographed on many occasions.  Here are some unusual photos that have been captured: 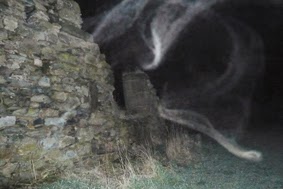 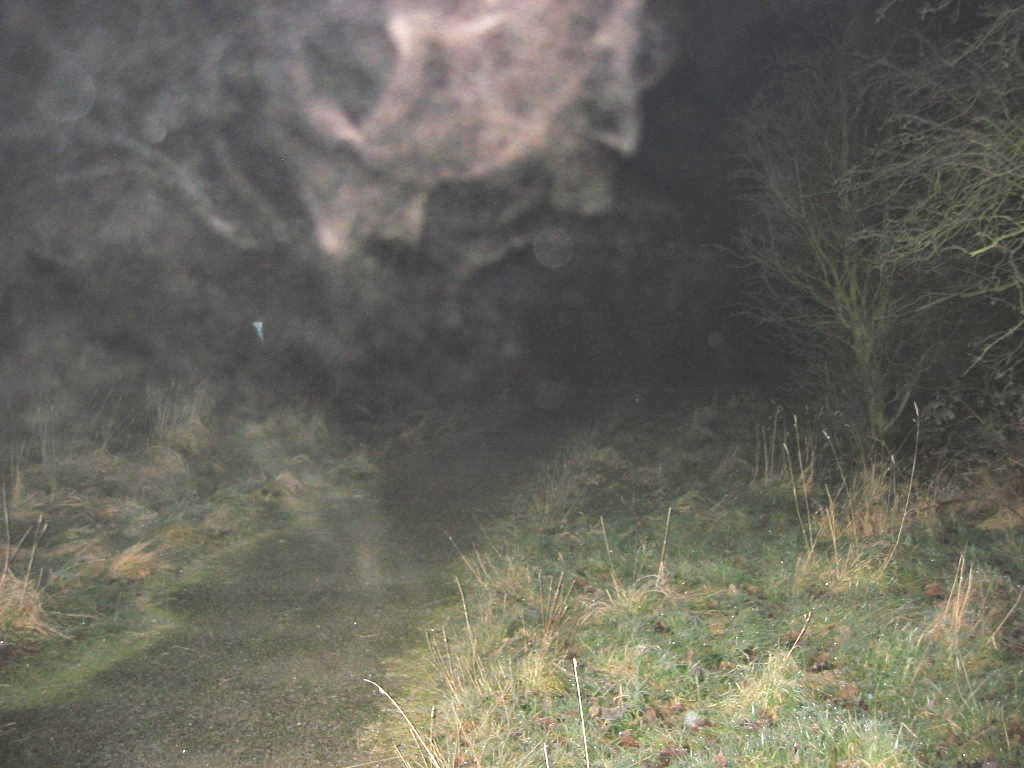 Is this site just another pile of rocks with historical significance?  Are some of those people who once lived here, still hanging around?  Have other spirits from other events or times gathered here?  Is Grace Dieu Priory haunted?  That is for you to decide!

*For more information:  http://gracedieupriory.org.uk/
Posted by Diane Student at 11:05 AM