Moment in Oddity - An Underwater River 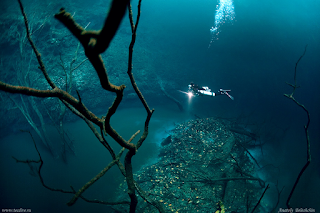 Is it possible for a river to be underwater? We don't mean a river OF water, but a river UNDER water. In October of 2014, photographer Anatoly Beloshchin decided to do some diving photography in the Yucatan of Mexico. He went diving in a swimming hole named Angelita. When he had reached 100 feet below the surface he discovered something shocking. There was another habitat beneath the swimming hole containing a river. Pictures clearly show a distinct river and one would not realize that it was underwater if not for the fact that a diver is in the picture with bubbles flowing from his tanks. It just looks like a river being photographed at night. Such a strange phenomenon is known as a cenote and results from the collapse of a sinkhole. This collapse exposes groundwater underneath and the sinkhole fills with fresh rain water. Vast underwater caves result. Because of the difference in freshwater from rain and saltwater from groundwater, the two water formations appear separate. The only evidence of the waters being together is the point where they converge or mix. This mixture causes a milky effect called halocline. It's a beautiful site to behold, but also quite odd.

This Day in History - First Air Mail in United States 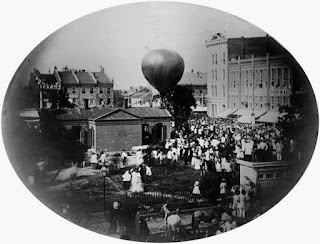 On this day, August 17th, in 1859, the first air mail made its way across America. Now most people might be scratching their heads because the Wright Brothers didn't get a plane off the ground until 1903, so how did air mail start in America in 1859. It travelled by balloon of course! August 17th was a very hot day as John Wise boarded his balloon named Jupiter. The postmaster had given him a bag full of 123 letters that needed to be delivered to New York City. The balloon Jupiter launched from Lafayette, Indiana. This big moment in history would not end in complete success. The weather turned nasty and Wise found it hard to navigate against the wind. He finally gave up and landed in Crawfordsville, Indiana. The mail was put on a train to complete its delivery. But in the end, it did travel part way via air for the first time in America. 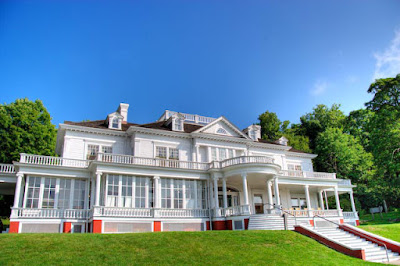 Moses Cone Manor is also known as Flat Top Manor and is located in the Blue Ridge National Heritage Area in North Carolina. It is a beautiful mansion built by Moses Cone at the turn of the last century. Cone loved the home and some wonder if perhaps he is still there in the afterlife. The tales that surround the manor include tales of moving furniture, ominous noises, strange happenings and even grave robbing. Our listener and North Carolina resident, Steven Pappas joins us as a special guest host as we share the history and hauntings of the Moses Cone Manor.

Moses Cone was born on June 29th in 1857 in Jonesboro, Tennessee. He was born into a German Jewish family. Both of his parents were born in Germany and immigrated with their families to America where they met and married. Moses was the eldest of thirteen children. Cone's father became a successful grocer and moved his family to Baltimore, Maryland where his success expanded. Moses and his brother Ceasar became traveling salesmen for the business. Moses learned much about business from his father. He became a successful entrepreneur in the textile business. He met a girl named Bertha and it took him four years to convince her to marry him. Moses convinced his brother to join him in investing in some southern textile mills. Those mills specialized in a textile that was perfect for blue collar workers: denim. By the late nineteenth century, Moses was known as the "Denim King." He opened a firm in Greensboro, North Carolina and entered into a busuiness relationship with the Levi Strauss Company that continues to this day. Life was good for Moses, but he did not live a long life. He died at 51 in 1908 from a pulmonary edema.

Seven years before his death, Moses built Flat Top Manor. Moses began buying up land in Blowing Rock, North Carolina in the 1890s and part of that land included Flat Toop Mountain for which the manor was named. The home was built in the Colonial Revivalist style and cost $25,000 to build. The house features large white columns and leaded glass windows. Amenities included gas lighting and central heating and there was also a telephone. The house had twenty-three rooms and included 13,000 square feet of living space. Horse drawn wagons had to bring in all the construction material and furnishings. There were several out-buildings that included employee housing, a washing house and a single lane bowling alley.

Moses had wanted to be buried on the property and he picked the spot several years before his death. Rumors circulated after Moses' death that he had been buried with a treasure of jewels. So one night, some grave robbers came and dug up his grave in hopes of finding the treasure. All they found was the corpse of Moses Cone. Out of frustration, they propped the body up against his tombstone, rather than burying him again. His poor wife Bertha is the one who found him. No one is sure whether he was buried in the same spot again or moved to a different location.

Separate portraits of Moses and Bertha hung face-to-face on opposite walls for many years. Someone moved the portraits one day to another wall, but not across from each other. The next day, the portraits were found on the floor, leaning against each other. No one could explain how this could have happened.

Moses is still on the property in spirit and his apparition has been seen by many people. Steven shared with us some of these experiences. All of them were told by people who did not know each other, but had similar experiences. Steven has been told that they walked up to the grave of Moses Cone there on the property without a flashlight to try and see something. All of these people claim the same thing. They all claim a man dressed in "old-timey" clothes walked up and offered to walk them back down to the manor. Then when they had gotten back, he bid them farewell, walking toward the stables and disappearing right in front of them. Steven also told us about how he and some other guys would bring freshmen up to the property to try and scare the hell out of them. occassionally they saw curtains move. They would make up crazy stories about fake owners and fake deaths to creep out the atmosphere. Once the lights all turned out. Apparently, a timer was connected to the lights, but that didn't stop all of them from running for their lives. They also once found an old pair of shoes from a by gone era sitting on the porch.

Steven told us about the experience a crafter who stayed overnight had in the manor. The bedroom door opened in the middle of the night, waking him from slumber. He checked to see if a draft had opened the door, but there was none. He closed the door and went back to bed. A little later, the door opened again. He checked to make sure that everything was level and closed the door again. Some time later it opened a third time and this time he shoved a chair under the doorknob. When he awakened in the morning, the door was wide open and the chair was sitting in the opposite corner.

Other crafters have stayed overnight when the weather is bad and they have heard furniture moving around on the second floor even though nothing is on that floor anymore. Another woman was staying overnight alone and she thought the talk of ghosts was ridiculous. She took a hot shower and became a believer when she saw a hand print in the steam on the window. She never came back to the manor. Disembodied music has been heard tinkling inside the manor although no piano exists. Steven told us that the Cones were lovers of music and played often.

The ghost of a little girl has been experienced on the property as well. One night the alarm was tripped, so the park ranger on duty went to investigate. He found nothing, but when he locked the front door, he caught the reflection of a young girl in the window who appeared to be standing behind him. He whirred around and she dashed passed him through the door and she ran up the stairs where she entered another room. he ran after her, thinking she was some kind of lost kid and when he went in the room, he found nothing. She had just disappeared.


"While at ASU in the 90s, I went there one day while it was open. I was in a photography class and wanted to photograph the house. I took a friend with me. She always claimed to speak to ghost. She had never been to the housse or heard of it. First thing she said before walking in was "there's something upstairs." I asked her what. She said a little girl. Then she said there was another, and older woman. Then she said, "Let's go!" and was out the door. She said the third thing scared her."

The Moses Cone Manor is a magnificient structure. Does it hold more than just the memories of the couple who once lived there? Are Bertha and Moses still living in their home in the afterlife? Is something else in residence at the home? Are these weird activities just figments of the imagination? Is Moses Cone Manor haunted? That is for you to decide?
Posted by Diane Student at 6:01 AM