There are strange oddities in the parched desert of Death Valley. They appear to just be simple large stones that weigh as much as a man and up to 700 pounds. But these stones do something peculiar: they sail across the desert. The reason people know the stones move is that they leave an indented trail behind them. Geologists and scientists have studied the stones and at first they surmised that wind and ice caused the movement. That belief was put to rest when people began to notice that the stones made abrupt shifts in direction. The area is covered with dry cracked mud in the summer and ice in the winter. The stones even seem to move around each other. The trails they leave travel in more than just straight lines. They move in curves and circles as well. Their speed has never been clocked and no one has ever seen them move. What mysterious force is causing the sailing stones to move? We'll probably never know, but the whole thing certainly is odd.

This Day in History - Joan of Arc Burned at the Stake

On this day, May 30th, in 1431, Joan of Arc was burned at the stake for heresy. Joan was born to peasant parents, but she would go on to be one of the most famous women in history. Joan's rise to infamy started with visions. These visions featuring St. Catherine, St. Margaret and Michael the Archangel told Joan that she was to support King Charles VII and free France from England. Joan went to war and rallied men to follow her in a time when women were not to do such things. Victories came swiftly and King Charles VII was crowned. France went on to become free. Joan of Arc; however, would lose her freedom. The English captured her and put her on trial before Bishop Pierre Cauchon. Upon hearing that Joan heard voices and saw visions and considering that Joan committed the high crime of cross dressing, the Bishop found her guilty and sentenced her to burn at the stake. She was only nineteen years old at the time. Joan was tied to a tall pillar and she asked two of the clergy present to hold a crucifix before her. A peasant made a small cross and Joan put it in the front of her dress. Witnesses said that Joan was brave and stoic as the flames engulfed her. It was a travesty and twenty-five years after the event, the Pope declared her innocent and stated that she was a martyr. She was then canonized and is considered a saint in the Catholic Church. 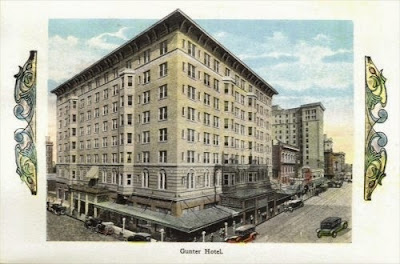 The Gunter Hotel is a historic hotel owned by Sheraton that is located in beautiful San Antonio, Texas. The hotel provides high end accommodations and amenities that include an old time barber shop. There is more than meets the eye at the Gunter Hotel though. A long history that includes a horrific murder mystery has led many to believe that the hotel is haunted. And based on people's experiences, this hotel very well could be host to at least one restless spirit.

The location where the Gunter Hotel stands has hosted at least three different hotels since 1837. San Antonio is famous as the location of the Alamo. The dispute between Texas and Mexico over ownership of the land had come to war. The Texians put up a valiant fight and held the Alamo for thirteen days. The Alamo did finally fall and all the defenders were killed. The brutality of the Mexican general who took the Alamo, inspired the Texians to take up arms and fight and Texas kept her freedom from Mexico. The Texas Revolution ended in April of 1836. It was in the year after the fall of the Alamo, that the first hotel was built where the Gunter Hotel now stands. That hotel was called the Frontier Inn. The Inn provided a great location that drew people from the East and kerosene lamps were used to light the building.

In 1851, two brothers from the Vance family bought the building and tore it down, replacing it with a two story structure. Their goal was not to serve travelers, but the military. The Army moved in and used the building as a military headquarters until 1872. The Vances then turned the building into a hotel and this decision became highly profitable when the railroad came to town in 1877. The accommodations were considered first class and luxurious. In 1886, German immigrants Ludwig Mahncke and Lesher A. Trexler bought the hotel and renamed it the Mahncke Hotel. Trexler had a lot of experience when it came to hotels and the business flourished.

A man named Jot Gunter helped finance the building of a new hotel on the site and so the new hotel that opened in 1909 was named after him. Gunter was a local rancher, so it seems fitting that the Texas hotel was named for him. St. Louis architect, Ernest Russell designed the building, which rose to eight stories originally. At the time, it was the tallest structure in San Antonio. In 1917, another story was added. The hotel was bought by the Baker Hotel Company in 1924 and they added three more stories to the building in 1926. In 1980, renovations were begun and lasted for five years. In 1989, the hotel was bought by the Sheraton chain of hotels who sold it to the Camberley Group in 1996. By 1999, the hotel was back in the hands of the Sheraton and an extensive eight million dollar renovation was done. The hotel was added to the Register of Historic Places and continues to provide accommodations to this day.

Before we get into the horrific murder mystery associated with this property, we wanted to point out an interesting fact. On a previous episode, we had discussed people in the music industry who had reportedly sold their soul to the Devil to get his help with writing music and becoming famous. Robert Johnson is one of those artists associated with the legend of meeting the Devil at the crossroads. He had absolutely no talent and could not play the guitar at all. After his meeting at the crossroads, he became an artist and guitarist who still inspires song writers and musicians today. He met an early and untimely death that some claim was the Devil collecting on his deal. Robert Johnson stayed in Room 414 of the Gunter Hotel in 1936 and he held an historic recording session in that room.

The murder mystery dates back to 1965. A man who signed himself in as Albert Knox was given Room 636. He was young and blonde and checked in alone. He was later joined by a beautiful woman over the next several days. Many believe this woman was a paid escort. A maid had been unable to service the room for several days because the "Do Not Disturb" sign had been left on the door. Finally, she decided to let herself in thinking that perhaps the guest had forgotten to remove the sign. When she opened the door, she was met with a horrific sight. The bed was soaked in blood and the walls were running with blood. Beside the bed stood Albert Knox. He appeared startled by the maid's entrance. He grabbed a bloody bundle and pushed past her, out the door.

The police were called and when detectives arrived, they could not believe what they found. Blood covered everything and pieces of flesh were found all around the bathroom. A used .22 caliber bullet was on the bed as were strands of blonde hair and women's undergarments. Detectives quickly deduced that the woman who had been seen with Knox had been killed and that he butchered and dismembered her body in the bathroom, flushing what he could down the toilet. The police figured out that Albert Knox was really Walter Emerick and they tracked him down at a hospital where he was under the name Robert Ashley. He shot himself in his hospital room before he could be arrested. Police never did find the body of the woman.

Since the grisly murder, guests and hotel staff have reported paranormal events taking place in the hotel, specifically in and around room 636. Many have seen a full bodied apparition of a woman. She is seen many times with her arms outstretched as if she is asking for help. Maids are uneasy about cleaning the room and have experienced cold spots, been touched and had their equipment messed with. Hammering is sometimes heard coming from that room, particularly when no one is staying in the room.


"Former staff member, Jackie Contreras, recalls an incident she had involving her and an apparition. One day back in 1990, she went to go check the room before important clients were to stay there that night.

When she opened the door, she found the room pitch black. Odd seeing how the maids typically drew the curtains back to allow sunlight in. As she fumbled around for the lights, the light from the hallway revealed a woman standing in the room.

Contreras says the woman was looking straight at her with outstretched arms! She described her as being very old and slumped over and as pale as a sheet. Contreras ran out of the room and down to the front desk to ask if anyone had been staying in room at the time. The attendants assured her no one had checked in….

That same year around Christmas, hotel employees were snapping photos together during the annual Christmas party. Once the photos were developed, one of the employees noticed a recurring unexplained human figure in each photo."

Does this female victim of a horrific crime still walk the Earth on this side of the Veil? Is she restless as she waits for her body to be found and justice? Is the Gunter Hotel haunted? That is for you to decide!
Posted by Diane Student at 3:03 AM