Hundreds of bodies have been found throughout the years during peat cutting activities in countries like Great Britain, Scotland, Ireland, Germany, Denmark and the Netherlands in bogs. They have been nicknamed the bog bodies. Some of these bodies date back to 8000 BC. Koelbjerg Woman is the oldest bog body found and it is believed she drowned at the age of 25 in 8000 BC. The bog bodies come in a variety of states of preservation. Some are basically skeletal remains, others are mummified well preserved bodies and some are just parts. The bogs are a type of wetland that is full of carbon, has low fertility and is found in a cool climate, so decay is very slow within the bog. Thus a human body that is buried in the bog, will become mummified in a way because of low humidity and all the processes within the bog. The great mystery about these people is how they came to be in the bogs. Many died violent deaths, so there are theories that the people were sacrificed. Some skulls had holes in them that appeared to be healing. Archaeologists wonder if they had some kind of brain surgery that they survived or if the holes were made to release evil spirits. We'll never know the true secrets of the bog bodies, but they are fascinating and certainly are odd!

This Day in History - King Henri IV is Assassinated

On this day, May 14th, in 1610, France's King Henri IV was assassinated. It was the final of twenty attempts to take his life. King Henri IV was an incredible leader and beloved by his people. He had been both an exceptional military leader and exceptional politician. France had been torn apart by religious wars and Henri IV united the country by converting from Protestantism to Catholicism. His rule was a time of restoration and reconciliation. On May 14th, Henri was riding in an open carriage through a Paris street when two carts blocked the passage. A mentally ill drifter jumped into the carriage and stabbed the king twice, slicing his aorta. The assassin is executed thirteen days later, but many questions were left. Were the carts blocking the path there by chance or had this been a plan? Did the assassin work alone? The mystery remains to do this day. The nickname the people had given King Henri was le bon Roy, which means good king. The king was laid to rest at the Abbey of Saint-Denis. The royal tombs were destroyed in 1793. The perfectly preserved embalmed body of Henri was taken to the Basilica and laid in state and the people of France filed by for days nearly 200 years after he had been killed. That is how much the French thought of King Henri IV. 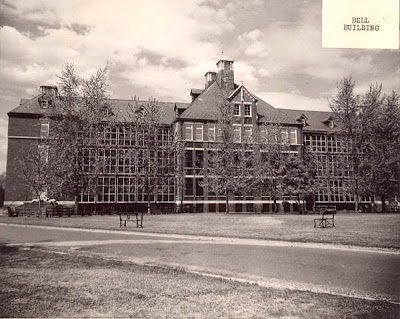 Norwich State Hospital in Connecticut served as a home and place of treatment for the mentally ill for a hundred years. As is the case with many old insane asylums, treatment methods were arcane and in some cases torturous. Mental illness was not understood and people were mistreated years ago. Places that harbor pain and suffering seem to capture the energy for all eternity and that energy tends to lead to supernatural activity. Is it because spirits become trapped? Are evil beings attracted to the painful emotions and so they come and take up residence? Or is the bad energy trapped within the walls of the building itself? Today, we talk about the history and hauntings of the Norwich State Hospital for the Insane.

The area along the Thames River where the Norwich State Hospital was built lies within the cities of Preston and Norwich in the state of Connecticut. Preston and Norwich were originally the territory of the Pequot tribe. The tribe was eventually pushed out and the Mohegan tribe took ownership, handing over some of the land to English settlers led by Johnathan Brewster in the 1600s. The town of Norwich was also sold by the Mohegans to settlers shortly thereafter. Agriculture became the main economic activity of the area and still continues to this day. Clay deposits were natural in the area and brick-making became another area of economic growth in the 18th and 19th century. As we have recounted in various podcasts, fires devastated towns and so building with bricks became very popular.

In 1904, one hundred acres along the Thames River became home to the Norwich State Hospital for the Insane, which was housed in one building. Ninety-five residents were held in the building originally. By the next year, 151 patients were in the building and it became necessary to build two more buildings. In 1907, another building was added. By 1915, thirteen more buildings were added and some of these buildings included residences for staff and other buildings needed to set up a small village. Norwich State Hospital was similar to Tranquille Sanatorium in that it was a self-sufficient location, growing its own food and setting up its own industry. Twenty buildings stood on the property by 1940 and each building was given the name of a founding superintendent of the American Psychiatric Association and other pioneers in the field of psychiatry. Buildings continued to be built until finally thirty buildings stood on 900 acres.

As some of the newer buildings were built, some of the older antiquated buildings were abandoned. By the 1970s, only seven of the original buildings were still in use. Buildings were connected by underground tunnels. These tunnels were used to run utilities, but patients were transported through them as well. The architecture of the buildings ranges from Modern to Gothic Revival to Colonial Revival. Early residents were the criminally insane, but eventually others would live at the hospital. The elderly were sent here, along with those who suffered from Tuberculosis and addiction. Norwich was not a pleasant place to live for many years. Reports of sexual abuse and physical abuse were investigated through the years. Other harsh treatment was discovered to have happened. Patients were starved, restrained, confined and packed in ice. Electric shock treatments were used up until the 80s. And of course, lobotomies were used as a last resort to control the most out of control patients.

Tragedies became a part of the Norwich State Hospital history as well starting in 1914 when a resident hung himself. In 1917, a hot water heater exploded and two employees were killed. Many patients died while at the hospital and some of those deaths occurred because of treatment. A nurse committed suicide at her home and another employee was hit by a car and killed while crossing the street. Salmon Hall was closed in 1971 after years of housing the worst of the worst. Incarceration in this building was tough and unpleasant. In 1988, the buildings of the Norwich State Hospital were added to the National Register of Historic Places.

Patients were able to participate in different activities and classes. There was occupational therapy in one of the buildings. Piano lessons were given, along with the teaching of different arts and crafts. Classes taught patients how to manage their lives on the outside of the campus. They were prepared well before returning to society in how to grocery shop, cook, make beds and social workers would help with the transition. New drugs helped to decrease the population at Norwich.

The hospital was closed in 1996 and the remaining patients were transferred to the Connecticut State Hospital. The state sold the property to the cities of Norwich and Preston for $1 and future plans for the property have not been decided. Some people want everything demolished and a nice preserve set up, while others believe the buildings could be developed as apartments. A development that was called Utopia became a source of conflict. Utopia did not have the money for clean-up and they did not seem interested in cleaning up the medical waste and such at the site. Most of the buildings had already been demolished by 2014 with the Administration building undergoing weatherizing and some restoration to save it. The costs of restoration would have been huge as most buildings were dilapidated. The city employs a private security company for the grounds and there is no trespassing allowed. There is hope that when the property is completely clean, developers will come running. 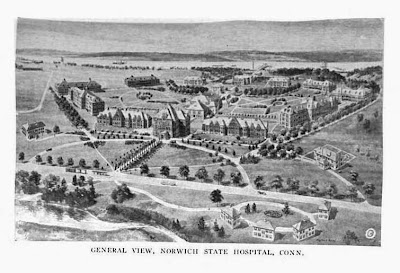 Stories of hauntings and supernatural experiences at the hospital have grown through the years. The main people who have been at the Norwich State Hospital since its closure have been members of  the security staff. One can imagine that patrolling a crumbling property full of sad and tortured emotions can be a haunting experience. Guards have reported paranormal activity for years. The lobotomy rooms give off strange beeping noises. When the buildings were still standing, many of them contained the haunting screams of unseen beings. There was talking and mumbling as well. A chilling air permeated many of the rooms when people walked through them.  One room in particular held the cries of an unseen woman in anguish. Apparitions of children have been seen as well and we saw some old photos that had both adult men and boys in the same rooms sitting at tables together. So children were definitely here. A doctor claimed that he saw two children looking out a window of the Salmon Building - the one that housed the criminally insane.

There are rumors that a student group help their initiations in one of the buildings and that perhaps they opened some kind of portal. Even demolitions cannot close portals. One investigator that had been in a few buildings before they were torn down got several pictures of columns of light and in two images there were clear pictures of faces. His cell phone was also completely drained when he entered a building. Maintenance people have seen weird lights on top of some of the buildings that resemble laser lights. Earle Building reportedly had doors that slammed on their own and tools were moved around. The tunnels have had screams heard in them. And people have claimed to hear screams in the Morgue as well.

Ghost Hunters featured Norwich State Hospital as the season six finale in 2010. They have been the only paranormal investigators allowed to check out the property. Obviously, a reality show's investigation is dubious at best, but since they are the people who have been able to investigate, we figured we would share their results. Now that most buildings are gone, there is not much to investigate anymore. But when TAPS was there, they were able to check out several buildings.The female investigators were in the hospital when they heard something dragging or sliding down the hallway towards them.They claimed that building felt particularly creepy. They heard audible talking as well. On the video later, a door does partially close on its own behind the girls. They heard shuffling in another building. Rats? Building falling apart? Two other male investigators also heard some dragging in a building they were investigating. They said it sounded like a piece of wood dragging on the floor above them. They saw a shadow figure peek around a corner too. Jason and Grant saw shadow people in an old research building and they heard moaning that reminded them of someone meditating. Diane did hear an audible whimpering during one part of the show like a dog. There are reports that animals were experimented upon at Norwich.

The buildings at Norwich State Hospital were once beautiful structures. Can tearing down buildings send spirits away? Or could the spirits of those at unrest be tethered to the land in some way? If the cities ever decide upon a plan for the land and the remaining structures, will any new buildings still be plagued by supernatural activity? Was Norwich State Hospital haunted and could it still be haunted? That is for you to decide!
Posted by Diane Student at 7:24 AM