Douglas Dummett began purchasing land in New Smyrna some time prior to 1844.  He built a house on an Indian mound overlooking the river, set up shop as a sugar merchant, and eventually tried his hand at growing citrus.  He quickly became successful and is credited with starting the strain that led to Florida’s famous Indian River Citrus.  A man of means, he was a natural choice to become the Justice of the Peace for theThis information is from Florida Fringe Tourism* 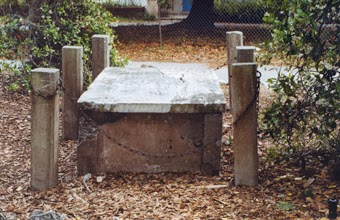 area.  Douglas married a black slave girl and had three daughters and a son, Charles, who was born in 1844.  On April 23, 1860, 16 year old Charles Dummett was hunting with a friend when he tripped and fell.  His gun discharged, killing him instantly. Distraught over his son’s death, Douglas built a marble tomb and buried Charles on the exact spot where he had died.  Many years later when Douglas was asked to sell some of his land to the city of New Smyrna, he had one stipulation: his son’s grave was to never be moved or disturbed.   The city agreed to his terms, and the deal was made.  In the 1960s, as the town began to grow and developments were being planned, the grave became the center of some controversy. A developer wanted to run a road directly over the final resting place of Douglas Dummett’s son.  After having all of his requests to move the grave site denied, the developer finally gave in and split the road around the tomb.  Today, the grave of Charles Dummett remains in the middle of Canova Drive, and motorists happily navigate around the burial site.  The grave has recently been named a city landmark and locals are happily joining in the effort to help preserve this little piece of Florida history. *

This Moment in History - Kennedy's Burial

On this date, November 25th, in 1963, President John F. Kennedy was laid to rest at Arlington national Cemetery.  John F. Kennedy made his first formal visit to Arlington National Cemetery on Armistice Day, Nov. 11, 1961, to place a wreath at the Tomb of the Unknown Soldier.  Eleven days prior to Kennedy's assassination he returned to Arlington for the 1963 Armistice Day services.  On Nov. 22, 1963, while on a campaign trip to Dallas, President Kennedy was shot and killed.  There are only two U.S. presidents buried at Arlington National Cemetery. The other is William Howard Taft, who died in 1930.  Usually presidents are buried in their home states.  Mrs. Kennedy was asked her wishes and she said, "He belongs to the people."  The first formal statement from Mrs. Kennedy concerning the burial was to model her husband's funeral after ceremonies rendered for Abraham Lincoln.  On Nov. 25, 1963, at 3 p.m., the state funeral of President Kennedy began.  Among the mourners at Kennedy's grave site were President Charles de Gaulle of France, Chancellor Ludwig Erhard of the Federal Republic of Germany, Emperor Haile Selassie of Ethiopia and Prince Philip of the United Kingdom. Overhead, 50 Navy and Air Force jets flew past the gravesite followed by the president's plane, Air Force One, which dipped its wing in final tribute.  A contingent of the Irish Guard stood opposite the grave, and the Archbishop of Boston, Richard Cardinal Cushing, performed a Roman Catholic committal service. The body bearers folded the interment flag, and the superintendent of Arlington National Cemetery presented it to Mrs. Kennedy. She and Robert Kennedy then used a torch to light the eternal flame. *Some material reprinted from the Arlington website here* 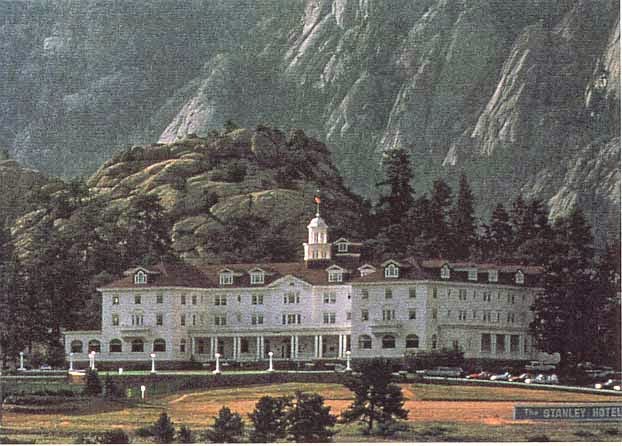 The ghost of Flora Stanley as seen in a photo can be seen here.  Is this really her?  You decide.

The History and Haunting of the Stanley Hotel by Rebecca Pittman is THE definitive book on this historic site!  Check it out here.
Posted by Diane Student at 11:24 AM