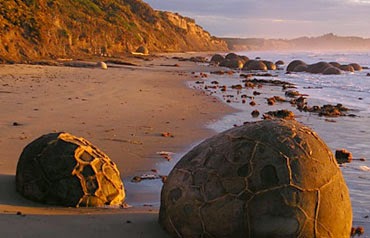 On the Otago coast of New Zealand's South Island, one can find some of the strangest boulders on the planet that have become tourist attractions.  These very large stones look like alien lifeforms that have been encased in stone.  These boulders can be as large as seven feet in diameter.  These stones are called Moeraki Boulders and they are created on the floor of the sea from sedimentary deposits that continue to gather in layers, much in the same way that a pearl is formed.  The material that makes up the boulders is mud, fine silt and clay that are cemented together by calcite.  Maori - the indigenous people of New Zealand - legend claims that the boulders are storage devices like eel and gourd baskets from the wreck of the Arai-te-uru, while a nearby rocky promontory is said to be the captain of the ill fated vessel.  While the idea that a rocky outcrop is thought to be the remains of a captain is strange, the legend fits well will these giant rocks that certainly are odd.

This Day in History - LSD is Invented

On this day, November 16th, in 1938, the drug Lysergic Acid Diethylamide is invented by chemist Dr. Albert Hofmann of Sweden.  The drug is better known as LSD.  Dr. Hofmann was not meaning to create a hallucinogenic drug.  He was doing research on a fungus that grows on rye named Ergot.  As we all know, penicillian was derived from fungi and the chemist was researching ergot alkaloid derivatives for medicinal uses.  One of the derivatives, Ergoline, is used today in treating migraines and Parkinson's Disease.  Dr. Hofmann did not realize that he had created LSD until five years later when he got some on his fingertips.  Dr. Hofmann described the experience like this:  "I was affected by a remarkable restlessness, combined with a slight dizziness. At home I lay down and sank into a not unpleasant intoxicated-like condition, characterized by an extremely stimulated imagination. In a dreamlike state, with eyes closed (I found the daylight to be unpleasantly glaring), I perceived an uninterrupted stream of fantastic pictures, extraordinary shapes with intense, kaleidoscopic play of colors. After some two hours this condition faded away.”  LSD would go on to be used in psychiatry and by the CIA in mind control projects like MKUltra.  Dr. Hofmann would go on to create Magic Mushrooms and other hallucinogenics.

The Shanley Hotel in New York 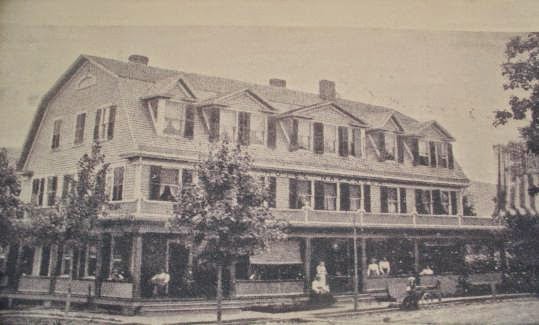 The Shanley Hotel is a beautiful inn with a long wrap around porch and a large arching roof that reminds one of a an old fashioned barn.  The hotel is painted in classic white with black shutters.  The hotel boasts 35 rooms with fun names like The Rose Room, The Blue Room, The Marguerite Room and The Silent Room, but there is more to this hotel than just the rooms.  There is a hidden basement room and a former bordello.  The Shanley dates back to the early 1800s and from that time until the early 1900s, the Shanley was a favorite spot for summer vacationers.  The hotel was located near the railroad making it very convenient for travelers and the town enjoyed the hotel for some other types of "entertainment."  The Shanley was not only a place to have a drink for the upper crust, but the "Private Gentleman's Club Quarters" provided companionship for a price.  The Shanley has seen twenty different owners come and go, experienced a variety of name changes and even burned to the ground once.  The charm of the inn is broken only by the countless reports of unexplained happenings that have lead to the declaration that the Shanley is one of the most haunted hotels on the East Coast.

The Shanley Hotel is located in the city of Napanoch in New York, nestled in the beautiful woods of the Shawangunk Mountains in the historic Hudson Valley.  A man named Thomas Ritch built the inn in 1845 and originally named the place after the city of Napanoch.  His goal was to provide accommodations that had the best food and lodging and he filled the place with the best amenities and furnishings for the time.  The first name change came in 1851 when the hotel was renamed "Hungerford's Hotel" and then in 1887 Adolph Wagner bought the place and the hotel flourished under his guidance, but in 1895 the hotel burned completely to the ground after a nearby house fire spread.  Not one to be discouraged, Wagner rebuilt the hotel in eight short months, but quickly sold it again and the hotel exchanged hands repeatedly until 1906.

In 1906, the Shanley Hotel would take on the owner for whom it has been named until the present day.  James Louis Shanley was born in Ireland on Halloween in the year 1874.  He had moved to the Hudson Valley for health reasons and was living at the hotel.  He was a successful entrepreneur and he decided he wanted to own the hotel and he made some changes that caused the town to adore the man.  The hotel became known for social gatherings that included card and domino tournaments and he installed a bowling alley, billiards room and a barber shop.  The rich and famous visited the Shanley as well.  Guests included Thomas Edison and Eleanor Roosevelt.

In 1910, James married Beatrice Rowley and when the couple returned from their honeymoon, the town threw them a parade.  James and Beatrice decided to start a family, but tragedy struck three times for them as all three children Beatrice gave birth to died within their first year of life.  The couple were heartbroken, but when Beatrice's sister, Esther Faughman, died after giving birth to her third child, the couple were given custody of her children.  High teas and card parties continued until August 26th, 1937 when James Shanley died from a heart attack.

Beatrice held onto the hotel until 1944 and then she sold it to Al Hazen so she could move to New York City where she died in 1961.  Hazen ran the hotel successfully until his death in 1971 and then a string of ownership left the hotel closed by 1991 and it stood vacant for a number of years leaving it in ruins.  In 2005, Salvatore Nicosia bought the building, refurbished it and the Shanley opened once again in 2007.

Sal originally moved to Napanoch so that he could restore a different historic building that was the homestead of Abraham Bevier, a project that took six years.  The Shanley came up for sale at that time and Sal decided he would like the new challenge.  The hotel has blossomed under Sal and become a mecca for paranormal investigation.

Before getting into the extensive documentation of supernatural experiences at the hotel, we should touch on some of the sordid past of the hotel.  James Shanley was a good man, but he also was a businessman and Prohibition brought opportunity.  We mentioned that the hotel had a secret basement room and that room was used by James and his business partner John Powers to make, store and sell bootleg liquor.  The room was accessible through a trap door in a hall closet.  Authorities raided the hotel in 1932 to put an end to the operation.   There is not much information about the bordello in regards to how long it was in business or how many owners kept up that side of the business, but bordellos always seem to have hauntings connected to them.  Based on evidence collected through the years by paranormal investigators and historians, the Shanley has been the site of much death through accidents, murder and natural causes.

No one seemed to know, or at least it was never recorded before, that the Shanley was haunted before Sal bought the place.  Sal and historian Doug Hart were celebrating the closing on the second floor of the hotel one night when they heard footsteps coming up the main stairway.  They were a bit worried that police or a neighbor were investigating why there was candlelight coming from the building.  Upon investigation, they discovered no one on the stairs and Sal checked the door and it was still locked.  Like most people, they didn't want to believe the place was haunted, so they started taking pictures and bought a video camera.  Through the pictures and EVPs they captured, the men realized that there were many spirits in the place.  Some were from the Victorian era, others were from the 60s and some were downright spooky.  We want to share a few of these spirits with you and then you decide if they are the product of overactive imaginations.

James Shanley had built a barber shop into the hotel and he hired a barber by the name of Peter Granger who had a three year old daughter named Rosie.  Rosie was playing across the road at the Hoornbeek Farm when she fell into a well there, hitting her head and drowning.  The frantic search for her took two hours before she was found.  The distraught barber moved to Brooklyn with the rest of his family shortly after that tragedy.  Rosie is said to haunt the hotel and has been caught on tape laughing and speaking softly in the bordello area.  Her bedroom had been on the second floor of where the bordello had previously been.  The well has been sealed by a heavy concrete slab.

In 1915, a six year old boy who lived in the house next to the hotel was hit by a car that was backing out of the alley between the house and hotel.  A spirit named Jonathan that haunts the third floor claims to be this boy.

We mentioned earlier that Beatrice Shanley's sister, Esther, had died.  She had lived at the hotel and died from influenza in 1918.  Her spirit is said to hang out on the second floor where her room had been along with the Sunroom that is adjacent to that room.  She had been a very lonely and depressed woman when she had been alive.

Many people have been through the doors of the Shanley and thus many different presences have made themselves known by opening and shutting doors, poking or pushing people, talking on tape and appearing as weird light anomalies in pictures, which can be viewed at the Shanley Hotel's official website.  Music from a bygone era can be heard in the rooms as well as disembodied footsteps.  The hotel has been investigated by many paranormal teams including TV's "Ghost Hunters" and "Ghost Lab" and was featured on "My Ghost Story."  Our friend paranormal investigator Linda Zimmermann has been to the hotel and written about it in her books as well.  Entering the bordello area leaves people feeling light-headed with overwhelming feelings of sadness.  Some guests have complained of being held down in their beds.

James Shanley was born on Halloween, so the hotel hosts a birthday bash every Halloween.  Although renovations continue, the Shanley Hotel is open for business and overnight stays include breakfast.  The beauty of the area and the quaint historic hotel are very inviting.  So would you want to book your stay at the Shanley?  Might you get awakened from your sleep by something going bump in the night?  Is the Shanley Hotel haunted?  That is for you to decide.
Posted by Diane Student at 10:16 AM