In the mid 1980s, a musical subculture started in the Northwest that came to be known as Grunge. Two prominent voices arose during that time, Kurt Cobain and Layne Staley. Kurt Cobain was the lead singer of the band Nirvana and Layne Staley was the lead singer of Alice in Chains. The details of Cobain's death are mysterious. Officially, his death was ruled a suicide by shotgun and he had high levels of heroin and diazepam in his system. There are some who believe that his death was staged to look like a suicide and that he actually was murdered. Staley died of what was officially ruled an accidental overdose of cocaine and heroin, known as a speedball. What is odd about both of these men's deaths is the fact that they both died on the exact same day, April 5th, eight years apart. And they both were found days after they died. Cobain was discovered three days after his death by an electrician at his house. Staley was discovered two weeks after his death. Was it just a coincidence that two of the most influential voices in Grunge died on the exact same date? One thing is for sure, it certainly is odd!

In the month of December, on the 24th, in 1903, the first car number plate was issued in England. In the beginning of the 1900s, more and more people were becoming owners of cars in Great Britain. With more cars on the road, auto accidents began to increase. The Motor Car Act of 1903 made it compulsory for every motorcar to be registered with a number plate to make it easier to identify cars. Registration began on January 1, 1904. The first car plate number issued was, of course, A1. It was registered to Earl Russell who had camped out all night to ensure that he received the first plate. The registration system has changed four times since then to accommodate all the vehicle registrations through the decades. Numbers were initially made up of a local council identifier code of up to 3 letters, followed by a random number, like ABC 123.

Cape May in New Jersey is considered to be America's oldest seaside resort and while the word "cape" is part of its name, Cape May is actually an island. Dr. Emlen Physick, Jr. built his home on Cape May at the age of 21 and he spent his entire life there. The estate is gorgeous with a unique "Stick-Style" Victorian architecture style. The doctor clearly loved the home that he shared with three other family members. They all died here and perhaps that is why it is believed that all of their spirits have remained here as well. Join us and Deana Marie of the TwistedPhilly Podcast as we discuss the history and hauntings of the Emlen Physick Estate!

The Kechemeche Indians of the Lenni-Lenape tribe were the first people in the Cape May area. Sir Henry Hudson discovered the island in 1609 and Cornelius Jacobsen Mey explored it in 1621. English colonists settled and built the island into a prosperous fishing and whaling colony. By the mid 1700s, Cape Island, as it was called at the time, became a popular place for vacationing. Visitors were brought in from Philadelphia by sloops, schooners, horse-drawn wagons and stagecoaches. There were no official inns at the time, so guests were housed in residential homes and taverns.

By 1834, there were six boarding houses and people were coming from many east coast big cities. Bigger hotels were built, like the New Atlantic, and by 1852, the Mt. Vernon Hotel was under construction. The plan was to accommodate 3500 guests at the hotel, making it the largest hotel in the world. It was consumed by fire in 1856, before it was completed. The Cottage Era began in the 1860s. This was a time when land was parceled out for Philadelphia families to build summer homes. A devastating fire broke out in 1878 and destroyed 35 acres of the heart of the island. Cape Island was rebuilt in a scaled-down version with architecture following the Gothic, Queen Anne and American bracketed styles. One of the new homes built at that time in 1879 was the Emlen Physick Estate.

The 18-room home was built for Dr. Emlen Physick, Jr. He hired renowned architect Frank Furness to design the home and is thought to be one of the best American examples of the Victorian style of building known as "Stick Style." The style was influenced by Tudor-style construction that featured exposed half-timbering and heavy oak framing. Decorative facades were used in stick-style to emphasize the basic wood frame structure underneath. The Emlen Physick features this style through decorative structural overlay, steeply gabled roofs, extended rafters with brackets to support the overhanging roof, decorative brickwork panels and large brackets that form curved diagonal braces along the porch. The interior features dark, ornately carved wood, Victorian wallpaper and a broad staircase. 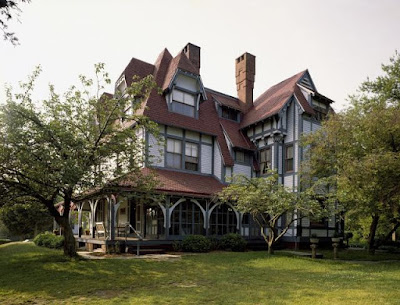 Dr. Physick lived with his widowed mother, Mrs. Frances Ralston, and his Aunts Emilie and Isabelle, at the mansion. He never married. The Physick family's roots ran deep in Philadelphia and his grandfather was Dr. Philip Syng Physick, whom is referred to as the father of American surgery. He was also the inventor of the stomach pump in 1812. Dr. Emlen Physick studied medicine to carry on in the family tradition, but he actually never practiced. He enjoyed being a country gentleman and loved his dogs. His mother would not allow the dogs in the house, but her sister Aunt Emilie would sneak the dogs in whenever Mrs. Ralston was away.

Dr. Emlen Physick was 58 when he died on March 21, 1916. His Aunt Emilie was the last family member left and she stayed in the house until her death in 1935. The house was willed by Emilie to the neighbor who took care of her, Frances Brooks. Drs. Harry and Marian Sidney Newcomer purchased the house around 1946 from Frances Brooks. Marian died in 1949 and her husband remarried and stayed in the house until his new wife could no longer bear the haunting activity going on in the house. They moved to an apartment  and sold the house to Cape May Inns, Inc. in 1967. The Mid-Atlantic Center for the Arts & Humanities (MAC) was formed in 1970 and it saved the estate from demolition and restored it. The city of Cape May eventually purchased the estate and MAC leases it from the city.  The organization operates the Victorian historic house as a museum and offers guided tours year-round. The entire estate covers four-acres and features not only the main house, but a Carriage House,  the Carroll Gallery, a museum shop, the Carriage House Cafe & Tearoom and Hill House.

The mansion is thought to be the most haunted location on Cape May. There are claims that Dr. Physick, his mother, his aunts and his dogs all haunt their former home. The paranormal hot spot in the house is Mrs. Ralston's room on the second floor. She died an agonizingly slow death in there from cancer in 1915. The bed there belonged to her. Dr. Newcomer would tell his friends that even though he was a man of science, he believed there were ghosts in the home. He heard footsteps and noises that he could not explain. Cleaning crews would complain about noises and disturbing events that had many of them leaving the house and not returning. Isabelle had been sickly and in a wheelchair and the family is said to have hid her away from the public for this reason. She died in 1883 in the house and it is believed that feelings of sadness in the house could be attributed to her. *Fun Fact: Isabelle was so hidden, that the house tours used to not even mention her.*

Craig McManus is a psychic who leads ghost tours and seances in the home and he has interacted with all of the family spirits and claims that other spirits show up on occasion as well. Craig's first visit to the house was not by his choice. A friend who loved history dragged him along and he says of that, "I am so glad I listened to Kathy! My experiences with the old house, from that day onward, have been some of the best paranormal times of my career." Craig claims that there is also a spirit in the carriage house that might have been Dr. Physick’s driver. Dr. Physick had the first automobile in Cape May. Guests claim to be touched during ghost tours and many have seen the apparition of a woman in vintage clothing wandering around the house.

The author of The Blog on the Borderland website attended a seance at the estate and wrote, "At some point, in the midst of all this, a woman to my left asked, 'Did anyone hear that sigh?'...I realized that I had indeed been hearing a sigh for some period of time—a beat, a few seconds, a moment—but it took a bit longer for my brain to catch up to what was happening. And then I thought, 'Yes, I did hear that sigh. I have been hearing it.' (but for how long?) And it wasn’t just any sigh, either. It hung in the air, just off my left shoulder. It was not a typical, weary sigh, not an exasperated or wistful sigh, but a long, breathy, drawn out sound. Sort of like wind, or the opening of an air lock. Or like the spooky respiration of some unnamed person on the other end of the phone line. It had a physical quality that pricked my skin. It seemed to occupy both a space in the room and some other void. I looked around and try to figure out if anyone around me could be doing all that sighing, but I couldn’t tell for sure. Then, the sound moved. It migrated up and to the rear, and I heard it just behind and above my head, near the door. And there was definitely no one standing back there."

Many people claim to have had experiences at this historic home. Have they really experienced something or is it just the power of suggestion? Has the psychic Craig McManus actually made contact with the former residents of the home in their spirit forms? Is the Emlen Physick Estate haunted? That is for you to decide!
Posted by Diane Student at 6:51 AM