Spring Grove Cemetery in Ohio is the largest non-profit cemetery in the United States. The grounds are beautiful and statues dot the landscape. There is a peculiar tombstone that features a partial bust of the man buried beneath it and it has inspired a legend. According to the tale, the man buried here requested in his will that his eyes be removed and placed in the socket of the bust. The eyes are indeed life-like. But as we all know, eyes are some of the first parts of the body to decompose. The legend continues that the bust will even turn and look at people. The truth is that the eyes can be seen from a distance and they are a bit disturbing. They are made from glass and painted to appear real and as happens with paintings, the eyes seem to follow you. So when you find yourself in Spring Grove Cemetery and you get that eerie feeling that someone is watching you, it just might be the bust of some dead guy with realistic eyes and that certainly is odd!

This Day in History - The French Assist the Irish Rebellion
by: Richard Schaffer

On this day, August 22nd, in 1798, the French landed 1,000 soldiers under General Humbert in County Mayo during the Irish Rebellion of 1798. The French were to assist the rebels in their fight against the British. The United Irishmen, a revolutionary group heavily influenced by the revolutions in both France and America, led the charge in the fight for Irish Independence. The main uprisings and bloody guerilla warfare had already taken their toll and the British and their loyalist factions had been successful at beating back and destroying rebel forces. The 1,000 troops linked up with about 5,000 Irish rebels and they struck a surprising winning blow against British forces. Despite the early success Irish rebel forces and French troops were routed, captured, and destroyed. Irish rebels were executed and the French troops that were captured were traded for British prisoners of war.

Guinness World Records has named Pluckley Village as the most haunted village in England. Pluckley dates back to the 11th century and was owned by the Archbishop of Canterbury. It is located on a hill in Kent and through the decades, it had expanded down the hill until the Black Death decimated the population in the 14th century and sent survivors back up the hill. One of the more well known areas is the Dering Wood named for one of the more well known families to live in the area. Dering Wood is also known as Screaming Wood. There are reports of as many as sixteen ghosts in this village. Listener and UK resident Alana Ashby joins us as we share the history and hauntings of Pluckley Village.

The Dering family was very prominent in Pluckley and many locations are named in their honor from Dering Wood to the Dering Arms Pub. They are of Saxon origin and descend from Ethelward, King of Diera. They began to rise in stature at the beginnings of the reign of Henry II. They inherited the manor of Surrenden to the east of the village. The Derings were barons who created libraries and launched new regiments. The Dering Arms was originally a hunting lodge built for the family in the 1840s. This pub is reputed to be haunted by an old woman who sits at a table near one of the windows. She wears period clothing, but looks so life-like that people usually think she is a real person. Until she vanishes.

The manor that the family owned named Surrenden Dering is apparently haunted by The White Lady. She was a former lady of the Dering family. Legend says that Lady Dering was so beautiful that her husband had her body embalmed and encased in four coffins, three of lead with an outer oak one. The theory is that since she did not receive a prompt burial, she is at unrest and now haunts her former home. In 1952, Surrenden Dering was burnt down in a mysterious fire. A few parts still stand today. There is also the Red Lady who is believed to be another Lady Dering, although her stories overlap the Lady in White, so perhaps they are one and the same. The Red Lady also haunts St. Nicholas' Church.

St. Nicholas' Church is 900 years old. It is the Diocese of Canterbury. The church is beautiful inside with a crownpost roof in the nave. There are two stained glass windows, with one in the east representing Jesus and the one on the north features the Annunciation. Built in 1475 and at the east end of the south aisle is the Dering chapel. These windows were designed by Francis Stephens and John Hayward in 1954, so they are quite modern. There are brass pictures depict members of the Dering family. Sir Edward Dering had them made in the 1630s to represent his family ancestry. Perhaps it is the connection of the Dering family to this church that draws the Red Lady to haunt the place.


Angie shared the following story from a friend:  "My friend had an experience this past weekend about the Lady in Blue. I told him about History Goes Bump podcast and what is about and wanted to share his story with you all. He said I could so here is his story, ""The Lady in Blue" So Maggie and I go to have our 2 year anniversary dinner at The Distillery in Moss Beach, Saturday night. We read the story about "The Lady in Blue" haunting the restaurant since the 1930s. We learn that she was found dead on the beach, right outside the restaurant and was wearing a blue dress. Little did we know, that she likes to see people having fun and celebrating love. By coincidence, Maggie wore a Blue dress and I wore a Blue suit. We then learned that when she appears to people, her dress is now black. So we joking call out to her by name, Cayte, and tell her that we're celebrating our anniversary and we'd like to her visit our table. Throughout our dinner, she never came. As Maggie watched as an eerie fog rolled in from the sea and wanted to capture a "scary shot", from our window front table. She was able to capture the fire pits from outside, but due to the glass, the top have of the image was a reflection of the interior and patrons dining. Or so we thought. The Lady in Blue can be seen in the image, directly under the light shining from the ceiling. A woman can be seen, standing under the light and waiting at a bar, just like in the original story. Believe me, that was not a waitress, nor was anyone else standing in that position. Be careful what you ask for, because she came to visit!!!"

Here is that picture: 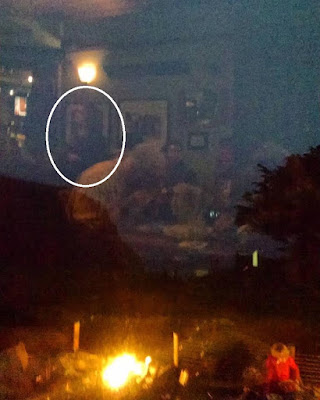 Posted by Diane Student at 5:14 PM