Alfred Packer is one of the most famous cannibals, but he is not the only cannibal from Colorado. Charles Gardner was known as Big Phil and people knew all about his cannibal ways because he was happy to tell the whole bar his stories for a free drink. His criminal life began in 1844 when he killed a Catholic priest in Philadelphia. He escaped prison and headed west. He was a huge man who took to living with the Arapahoe tribe. They called him Big Mouth because he would eat large amounts of raw meat. Big Phil was sent to Fort Laramie one winter with dispatches and he took a Native American guide along with him, who was apparently not much use because the men ended up lost and soon they were out of food. Big Phil eventually showed up at the fort, but he was alone. When asked where his guide was, Big Phil pulled a shriveled black foot out of his pack. He told everyone that after starving for five days, he killed the guide and began eating him, raw. Some time later, Big Phil married a Native American woman and they were living in a cabin. He was trapping for Kit Carson and at the end of the winter, one of Carson's men came to resupply Big Phil. He found Big Phil alone and when he asked about his wife, Big Phil stated matter-of-factly that he had eaten her. Some claim that Big Phil actually ate two wives. And apparently a Frenchman was a victim of Big Phil's as well. Big Phil the Cannibal certainly was odd!

This Day in History - Nadia Comaneci Earns Her First Ten
by: April Rogers-Krick

On this day, July 18th, in 1976, 14-year old Nadia Comaneci earned the first ever perfect score, a ten, at the Montreal Olympics and went on to score it six more times and win three gold medals. Just a few months shy of her 15th birthday and standing only four foot eleven inches and weighing in at eighty-eight pounds Nadia Comaneci become the first person to ever score a perfect ten in Olympic gymnastic history. She scored four perfect tens in the uneven parallel bars and three perfect tens on the balance beam and the all-around competition, as well as a team silver and a bronze for her floor exercise. The Russian coach felt that the ten was wrong and criticized the judges. Russian gymnast, Olga Korbut, the darling of the 1972 Munich games, questioned Comaneci’s perfect marks. "I question the 10.0 that was given because there were two flaws in the performance," said Korbut, vying with Comaneci for popularity. Gymnastics fans were not surprised by the performance. At the 1975 European Championships, Comaneci won four gold medals and a silver. She also introduced the world to a new dismount on the uneven parallel bars which the International Gymnastics Federation officially named “The Comaneci Come Down.” It is no longer possible to compete in the Olympics at the age of 14, and following changes to the scoring system in 2008, it is no longer possible to score a perfect ten. There are very few Olympians who can say that their achievements will never be equaled, but Nadia Comaneci can with absolute certainty. 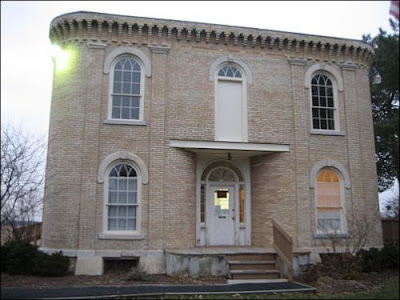 The Stickney House is one of the most unique houses in America and in the world because it was built with nearly no right angles. This was no accident and served a very specific purpose. The owners who built the home wanted to maximize the movement of spirits because they enjoyed interacting with spirits, but also wanted to prevent evil spirits from getting stuck in the corners. The same superstititions that inspired the Winchester Mansion seem to have inspired this home as well. The Stickneys were avid Spiritualists. It is no wonder that this home is reported to be haunted. Join us as explore the history and hauntings of the Stickney House!

The Stickney House is one of the oldest brick buildings located in Bull Valley, Illinois. Bull Valley is part of McHenry County and it is surrounded by some of the largest hills in the area. The village was known for trying to establish itself as a rural community and has made great efforts to retain that small town feel with nearly no government infrastructure. There is no retail business in the town and no electric street lamps. The little bit of government organized in Bull Valley keeps its offices in the Stickney House.

George Washington Stickney was born in New Hampshire in 1809. He moved from New York to the Bull Valley area in 1835. He married a woman named Sylvia Beckley in 1839. They built a log cabin in the Illinois wilderness at that time and as they prospered, they were able to begin construction on a much larger home in 1849. They liked the wilderness not only for farming, but also they wanted to avoid the typical town gossip and prying eyes. The Stickneys were Spiritualists and although they lived during a time in the 1800s when that form of spirituality was becoming more popular, they wanted to have their privacy. Stickney House was built in the style of an English country home and although today it would not necessarily be thought of as a mansion, it was at the time. This mansion was very unique for a number of reasons. The first thing that strikes us as bizarre is that the house was two stories and the entire second story was a ballroom. A huge ballroom in the middle of rural Illinois? And the other unusual characteristic of the house was that it was built with rounded corners, except for one that was a mistake.

No one knows for sure what inspired the Stickneys to get involved with Spiritualism, but the greatest pull was the desire to communicate with the spirits of dead loved ones. Specifically their children. The couple had ten children, but only three of them survived to adulthood. The large ballroom was not built for dancing. Large seances were held in the ballroom and the Stickneys invited people from the surrounding communities. It is believed that they built their house with rounded corners to facilitate the movement of spirits. The Stickneys may have believed that spirits could get trapped in a 90 degree corner. We've discussed this idea when talking about mirrors. Many cultures believe that rounded surfaces keep evil spirits away. The Shakers were building round barns in the early 1800s for this reason. The Chinese built houses with curved eaves to block evil spirits.

Many of the theories that paranormal investigators and ghost television shows espouse about ghosts come out of spiritualist beliefs. One of those is the idea that negative entities can be the spirits of people who were mean and nasty during their lifetimes and not just evil spirits. This is part of the idea that we carry our personality with us into the afterlife. The core of Spiritualism is the belief that we can communicate with the dead. And that is the essence of paranormal investigation. Sylvia Stickney was believed to be a very accomplished medium. Of course, the term accomplished is relative. Mediumship has its roots in ancient times, but it became popular during the 19th century and as Houdini helped to prove, much of the spirit communication going on was fraud. There is no information about the type of techniques used by the Stickneys, but they could have included table tipping, channeling, levitation and using talking boards.

The Stickney House served other purposes in its time. During the Civil War, the Union used the house as a headquarters. It also had the first piano to be found in McHenry County. George died in 1897. We read several websites that claimed that Sylvia outlived George, but we also found a site that claimed George was widowed and remarried. The 1880 census makes it clear that George was a widower. Sylvia's grave marker records her death in 1879. Records indicate that George remarried to a woman named Lavina Congdon. We're not sure what happened to the house directly after George's death. We know it was abandoned for certain time periods. Roderick Smith moved into the house in the 1970s and he would be the first to report hauntings in the house. Another couple bought the house in hopes of restoring it, but their money came to an end and the restoration did not happen. In 1985, the house became the property of the local government and now houses some government offices and the Bull Valley Police Department. It has been registered as a historic landmark. A 1991 article in the Chicago Tribune reported that Mary Hill and Verna Hogan were heading up efforts to restore the house back to the way it was when the Stickneys lived there and that they estimated it would cost several hundreds of thousands of dollars.

There are some who believe that the Stickneys were not into Spiritism because the craze was before they moved into their mansion in Bull Valley, but something seems to have been conjured in their home. Most of the corners were rounded in the mansion, but not all and it was in the one 90 degree angled corner that George Stickney was found slumped over with a horrified look on his face. Was it just a coincidence that he died in the one corner that his beliefs would have led him to believe an evil spirit could have been trapped? Kelsey told us that as kids, they were told the house was built with no corners, so that the Devil couldn't kill George Stickney. It would seem that the spirit of George is trapped in his former home. His full bodied apparition has been seen walking the halls.

Roderick Smith claimed that he often heard strange noises in the house and his dogs were very restless there. They never seemed comfortable and would growl at unseen things. Smith said that he had heard that Satanists had lived in the house before him and that they tainted the house with their black magic rituals. The truth was that hippies had lived in the mansion doing drugs and spray painting graffiti on the walls. They painted the walls in dark colors and built fires right on the floors of the house. More than likely, they were just squatters rather than devil worshippers. Smith was convinced they had created the heavy atmosphere.

The strangest spirit reported at the house is that of a woman in a wedding dress who is usually seen peeking around a curtain in one of the upstairs rooms. No one knows who she is, so some wonder if this is a conjured spirit from so many years ago. She was allegedly caught in a picture when a real estate agent took pictures of the property in preparation of putting it on the market. Some doubt that there are any hauntings at the Stickney property.

The couple who moved in after Roderick Smith reported no strange happenings, but the police have had several experiences. Officer Ken Hoffman witnessed several drawers opening and closing on their own. In 2007, Officer Hoffman and Police Chief Norbert Sauers both saw a woman in white walk past a front window while they were talking to each other in an office. They went outside to see who the woman was and she had disappeared. Chief Sauers is a skeptic, but he can't deny that he has heard footsteps and pounding in the walls and seen lights turn on and off. Several officers have quit after experiencing activity in the house.

The house certainly has a strange history if we are to believe it was a type of Spiritualist headquarters. Were spirits conjured here? Does George haunt his former home? Is he trapped along with other spirits? Is Stickney House haunted? That is for you to decide.
Posted by Diane Student at 7:49 PM