Moment in Oddity - The Wooden Doll of Egeskov
By: Listener Lisa Nielsen

There is a wooden doll inside the Danish castle, Egeskov, that apparently helps to keep the castle from sinking into the moat. The doll, which is the size of a small child, can be found in the rafters of loft in the castle, lying upon a dusty red cushion. The doll has been here since 1554 and no one is allowed to touch it because of the legend attached to the doll. If the doll is moved, it is said, the castle will sink into the moat on Christmas Eve. Because of this, the past generations living there would never spend Christmas at Egeskov, just in case. These days, the resident family just leaves a bowl of rice pudding for him. Plenty of people, including Lisa's family, do something similar, where they leave the rice pudding for the elves. The guy who manages the exhibitions, Jørgen Johansen, has two stories about the doll. The current count's grandmother wanted to know how old the doll was, so she sent it to the National Museum in Copenhagen, hoping they might be able to figure it out. Within two days, the castle started creaking ominously and it continued for days. This freaked the grandmother out and she didn't dare have the doll away from its proper place any longer. She sent someone to pick it up and as soon as it was back, the creaking stopped. The other story is about a woman who'd just happened to rest her  hand on the entrance and had noticed the nails were unusually cold. She and the manager went to check on the doll, and it turned out it had been flipped. They rearranged it so it was lying as it usually was, and upon return to the entrance, they found the nails had returned to a normal temperature.No one knows how the legend started or if the threat is real, but nobody is taking any chances making the wooden doll of Egeskov quite odd!

This Day in History - Earhart First Woman to Cross North Atlantic by Airplane
by: April Rogers-Krick

On this day, June 18th, in 1928, Amelia Earhart landed safely in Burry Port,Wales, becoming the first woman to cross the North Atlantic by airplane and doing it in less than 24 hours. Following Charles Lindbergh's solo flight across the Atlantic in 1927, Amy Phipps Guest, expressed an interest in being the first woman to fly or be flown across the Atlantic Ocean. Deciding that the trip was too dangerous for her to undertake, she offered to sponsor the project, suggesting they find a woman who could portray the right image.  Amelia Earhart, a Boston Social Worker, was contacted at work by Capt. Hilton H. Railey and he asked if she "Would like to fly across the Atlantic?" Project coordinators, including book publisher and publicist George P. Putnam, interviewed Amelia and asked her to accompany pilot Wilmer Stultz and mechanic Louis Gordon on the flight. She was to be a passenger with the added duty of keeping the flight log. Flying in an orange and gold float equipped, three-engine monoplane, Pilot William Stultz, Co-Pilot Amelia Earhart, and mechanic Lou Gordon departed from Trepassey Harbor, Newfoundland on June 17.  The trio crossed the Northern Atlantic in the record time of 20 hours and 49 minutes, landing safely in Burry Port, Wales.  Since most of the flight was on "instruments" and Amelia had no training for this type of flying, she did not pilot the aircraft.  After landing, she was quoted as saying "Stultz did all the flying-had to.  I was just baggage, like a sack of potatoes. Maybe someday I will try it alone." When the trio returned to the United States, they were greeted with a ticker-tape parade in New York followed by a reception with President Calvin Coolidge at the White House. 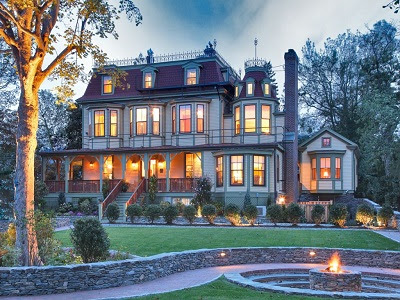 Newport, Rhode Island has been the summer playground for Presidents like Eisenhower and Kennedy and also for the rich, which is evident in the many mansions that dot the seaside town. Some of these mansions date back to the Colonial Era. The Cliffside Inn is one of the mansions here and today it serves as a bed and breakfast. The most notable family to live at the Cliffside Inn is the Turner Family and they have an unusual and interesting history. Although the Turner Family is long gone, it would seem that their spirits have remained with the home that was so much a part of their life. Today, we are joined by our listener Suzy Duhme to get her first hand account of the Cliffside Inn and some of the spooky experiences she and her friends have had!

Newport is located in Rhode Island in Newport County, 37 miles south-east of Providence and 74 miles south of Boston. Before it was called Rhode Island, it was known as Aquidneck Island. English settlers came here in 1639 with Anne Hutchinson, a religious leader who had been driven out of Boston for her religious beliefs, which challenged Puritianism. When she arrived here, she grouped up with another settler, Roger Williams, who was also banished from Massachusetts for religious reasons. Hutchinson purchased the island from the Native Americans who lived here. These early settlers founded the new town on religious freedom and Newport became the first secular democracy in the New World.

Another group split from Hutchinson lead by William Coddington and Nicolas Easton and they would found Newport in 1639. The idea of religious freedom brought other groups as well. Soon the Quakers and Jews were here. The Quakers dominated political, social and economic life of Newport into the 18th century. By the 1760s, Newport had become one of the five leading ports in North America. During the American Revolution, it became a hot bed of revolutionary fervor. The British occupied Newport from 1776 to 1779 and more than half of the residents fled the town. The British were eventually driven out with the help of the French. The French began a sojourn in Newport lead by Admiral deTiernay and General Rochembeau, which lasted until 1783. They left to march with General Washington to Yorktown.

The occupation had done terrible damage to the town economy and Newport was forced to reinvent itself. Newport was not industrialized like other places and this gave the town an advantage when it came to attracting Summer visitors. They liked the pictureaque qualities of the area. Newport became a center for artists, writers, scientists, educators, architects, theologians and landscape designers. During the Guilded Age, Newport was host to elite families such as the Kings, Griswolds, and Vanderbilts. The area is very diverse when it comes to ethnicity as well.

The Cliffside Inn was built in 1876 by Maryland Governor Thomas Swann and was first called “Swann Villa." In addition to being a Governor, Swann was also an inventor and railroad President. The Swann family vacationed here in the summers until 1897. He was not considered a nice man and there are rumors that he may have delved into the dark arts. From 1897-1901, it was converted to St. Georges School, a private prep school for boys, until it moved to its permanent campus in Middletown, RI.


In 1907, the house was bought by the Turner Family of Philadelphia and they turned it back into a summer home, calling it Cliffside. Andrew Turner was a cotton merchant and his wife Adele was a prominent Philadelphia socialite. Adele was a descendent of Jacob Shallus, the engrosser of the US Constitution. Their only child was Newport legend and artist Beatrice Turner. Andrew kept a tight leash ob Beatrice and some believe he had a little too much interest in his daughter. When he caught her walking with a young man one day, he berated her and chased the boy away. He forbid her to marry. Beatrice never would marry.

Andrew died and Beatrice continued to summer at Cliffside with her mother. The women were perculiar, living as recluses dressed all in black. Beatrice had been told by her father that she was only allowed to paint herself and the family and that is what she did. She spent her life painting mostly self-portraits. When she died in 1948, 3,000 of her paintings were found in the house. Many were destroyed, but several exist to this day and can be found hanging in the Cliffside Inn. Beatrice summered at Cliffside until her death in 1948. Her Self-Portraits can be found all over the home.

The current owners Bill and Nancy Bagwill, bought the house in 2010. They invested a significant amount of time and resources to restore the house. The Cliffside Inn is now a luxury bed and breakfast in the historic district of Newport, RI. Located steps from Cliff Walk, near quiet beaches and a short walk to restaurants and shopping. This lovely restored Inn offers a nice blend of historic charm with deluxe amenities such as whirlpool baths, spa showers, fireplaces, grand beds and imported lines.

Suzy shares with us a scary and weird experience her husband had at another inn named for Adele Turner and then she tells us about the experiences a sensitive friend of hers has had at the Cliffside. That friend has seen the full bodied apparition of Beatrice up on the Widow Walk. She also has been told various things by the spirit of Beatrice.

Does Beatrice Turner and her parents still hang out at their summer home in the afterlife? Is the Cliffside Inn haunted? That is for you to decide!

http://www.cliffsideinn.com/
Posted by Diane Student at 7:02 AM