Mixing fire and paper is never a good idea. Since the Holy Bible is a thick bound pile of paper, one would think that Bibles would burn quite readily. But something strange happens on occasion when Bibles and fires mix. It would seem that sometimes the Bible is fireproof. One such example of this phenomenon occurred last week involving one of the lead singers of country group Lady Antebellum. Hillary Scott was sleeping in the back of one the group's tour buses when a rear tire blew out and the bus caught fire. She evacuated the tour bus quickly, along with her husband, tour manager and the driver. The entire rear lounge area of the bus was destroyed including everything in it, except Hillary's Bible. She wrote on Facebook: "I kid you not, EVERYTHING in the back lounge was destroyed from the flames, except my Bible. The outside cover was burned and messed up but NOT ONE PAGE was missing." One might say this was luck and that the idea that a Bible will not burn is Urban Legend. But how do you explain all the people who began sharing their personal stories of similar experiences? Pam said the interior of her car was burned out, but the Bible she left inside had only a singed cover. Monica wrote, "When our house burned down 7years ago everything was destroyed .the firefighters did their best to save it but there was no use. A young firefighter fell through the floor and when they pulled him out he had my bible in his hand. Neither the firefight nor my bible was harmed." The Unexplained Mysteries website forum details a story about a girl whose house burned down, but the family Bible survived with only a burned cover and singed pages. So is the Bible fireproof? You knows for sure, but a book that doesn't burn in a destructive fire certainly is odd!

Twenty years ago on this day, April 19th, in 1995, America was shocked by a domestic terrorist attack on American soil. Baylee Almon would have been twenty-one years old this year if she had not been killed that day along with 167 other adults and children. Baylee was the little girl pictured in a photo taken by Charles Porter IV that appeared in papers and on the cover of Time magazine being cradled by a firefighter. The image of her sweet lifeless body was forever burned into the minds of people who saw the picture and won the photographer a Pulitzer Prize. Timothy McVeigh, a Gulf War veteran, and his accomplice Terry Nichols planned and carried out a bombing against the Alfred P. Murrah Federal Building in downtown Oklahoma City. They formulated a bomb from fertilizer and other chemicals and loaded it into the back of a Ryder rental truck. McVeigh parked it in front of the building and then set it off. The blast completely obliterated the front of the Murrah building and damaged 324 buildings within a 16-block radius. After the blast, 665 rescue workers worked in rescue and recovery operations. Not only were 168 people killed, but 680 were injured. McVeigh was pulled over ninety minutes after the attack and arrested for driving without a license and weapons charges. Nichols was arrested shortly thereafter. McVeigh claimed that he was motivated to give the government some payback after the Ruby Ridge and Waco Sieges that were disastrous for the government. Nichols was sentenced to life in prison without parole and that included 161 life sentences, which set a Guiness World Record. He is incarcerated at the maximum security prison in Florence, Colorado. McVeigh was sentenced to death and that was carried out via lethal injection on June 11, 2001. The Oklahoma City National Memorial was built outside of the Murrah Building and dedicated in 2000. 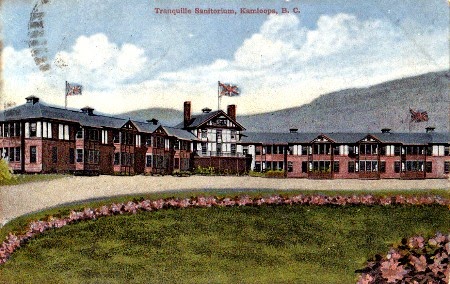 On the outskirts of Kamloop, British Columbia lies what remains of a once thriving self-sufficient city for the sick. Tranquille Sanatorium is a complex made up of over forty buildings that once housed the sick and later the handicapped. The grounds were beautiful and tranquil and today attempts are being made to revitalize the location. But not all is tranquil at the Sanatorium. Spirits continue to knock about the place. The years of loneliness and sadness seem to have been absorbed into the environment and on occasion, those emotions can be felt by the living and haunting encounters can occur. It would seem that Tranquille Sanatorium just might be haunted.

Kamloops, British Columbia in Canada began as a fur trading post in 1812. The Thompson Rivers meet in Kamloops and the local indigenous tribe, Secwepemc First Nation, named it Tk'emlups, which means "where the rivers meet." The location near the rivers helped Kamloops grow into a thriving city. Two rival fur trading companies had set roots in the area, The Pacific Fur Company and The North West Company. The two companies combined efforts in 1813, but were later merged into the larger Hudson Bay Company in 1821. The Hudson Bay Company established Thompson's River Post. The post would later be renamed to Fort Kamloops. Fort Kamloops became an important way station between forts and later was used heavily during the Cariboo Gold Rush. The Cariboo Gold Rush was the most famous gold rush in British Columbia and started in 1861. The Canadian Pacific Railway was established in the 1880s and Kamloops expanded during that time. The city was incorporated in 1893.

In 1907, the King Edward Memorial Sanatorium was built in Kamloops to help treat tuberculosis despite the objection of local townspeople who feared contracting the dreaded disease. The climate in Kamloops is semi-arid and temperatures are generally mild, making it a keen place for tuberculosis sufferers. The name was later changed to Tranquille Sanatorium based on the small community that built up around the hospital. The community included several homes, a farm and a fire department. The farm was original to the property and had been owned by the Cooney family that originally settled the area in 1865. The Anti-Tuberculosis Society bought the property and used the farm to house sick people until the hospital could be finished. And the farm continued to operate as a ranch, helping the hospital to be fairly self-sufficient. The hospital was under the direction of Dr. Charles Fagan. The goals of the Anti TB Society were:
*To inaugurate and carry on a publicity campaign against tuberculosis;
*To stimulate a lively public interest in the prevention and treatment of tuberculosis;
*To cooperate with, assist and encourage organizations and institutions engaged in the fight against the
white plague;
*To endeavour to promote the physical economy and social welfare of dependents and homes of persons
incapacitated with tuberculosis;
*And generally to assist by all lawful means in bringing about conditions designed to control and prevent
the spread of tuberculosis and curtail its ravages.

The main building was completed in 1910. Other buildings were built to house doctors and nurses on the property. The nurses' residence was completed in 1913. The Anti-Tuberculosis Society ran the sanatorium until 1921. The provincial government then took over operations. The decision to transfer operations to the government at that time was made because according to Provincial Secretary John McLean, "This is too large and important an undertaking to be managed and supported by voluntary effort, and secondly, because the care of contagious disease of this nature should be the duty of the province." The government built the J.B. Greaves Building in 1921 using money donated by J.B. Greaves to the Anti TB Society. In all, there were forty buildings on the property with four of them serving as hospitals, including the main building, the Greaves Building, the East-West Pavilion and the Infirmary. A beautiful sunken garden was built on the property as well. Access tunnels were built below the gardens to facilitate the transport of food and laundry.

The hospital closed in 1958 when tuberculosis had become less of a threat because a cure was discovered in 1957. Tranquille Sanatorium was repurposed and reopened the following year as a place to house the mentally handicapped and mentally ill. Conditions in such hospitals was deplorable around the world. Tranquille tried to be different. The food was good and care was better than most places, but privacy and other concerns were poor. Unionization caused care to decrease in the 1970s. The hospital closed permanently in 1983. Twenty years later, a group of investors bought the property and renamed it Tranquille On The Lake.  Many of the buildings were decorated with murals that still exist to this day. Restoration efforts are underway and the ranch is still a working farm that is open and sells produce as the Tranquille Farm Fresh Market on the weekends. The ultimate plan is to make the area an urban living location. We wonder if prospective residents have been told about the unseen residents that knock about the place?

We did find some records that indicate that there was a cemetery on property that was relocated to Kamloops. Bodies of the poor and unclaimed were dumped into a mass, unmarked grave apparently. Not something one wants to do if they hope to keep spirits at rest. Reports of light phenomenon abound on the property. Light orbs and faint floating lights are seen traveling in circles, especially at the main entrance and the lights go on and off by themselves. Many of the buildings are abandoned and will probably be demolished. Apparitions and dark figures have been seen in the windows. A bizarre twisting mist has been captured in pictures. The mist is not witnessed by the naked eye.

The hospital had been divided into several wings. The B Wing in particular has reported hauntings. Pediatrics was contained in this wing and the crying of children is still heard there. An apparition has been seen wandering this same area claiming she is looking for her lost child. She is witnessed crying. Those cries echo in the hallways even after she disappears. An electrician reportedly died in the basement while doing repair work and his spirit is sometimes seen down there.

As mentioned earlier, there were underground tunnels beneath the sunken gardens. These tunnels are reportedly the most haunted area of the location. More than food and laundry was moved in these tunnels. Dead bodies were transported this way as well. The staff did not want to upset the living, but apparently they did upset the dead. People who have investigated the tunnels claim to have been pushed by unseen forces and muffled moans are heard echoing down the tunnels. Tunnel tours are offered on occasion.

Rumors have circulated that a nurse was murdered by a patient and now she still wanders the grounds. An intense feeling of sadness is felt throughout the buildings that we believe is latent emotion that has built up from years of people being separated from others and their family because of their illness or mental issues. Sudden drops in temperature are felt as well. One person claimed that he was at the location at night and he was chased away by a mist like apparition.