While I was researching a haunted castle in England, I came across an unusual picture that seems to feature a ghost.  The ghost possibly belongs to a helicopter pilot who flew during the Falklands War since that is when the helicopter in the below picture was used.  The Falklands War took place over several months in 1982.  Helicopters played a major role in the recapture of the South Georgia Island from Argentine forces.  I am not an aviation expert and I have no idea what type of helicopter is in this picture, particularly with so little of the helicopter appearing in this photo, but I did find a record of a British Army Air Corp Western Gazelle helicopter that was shot down by friendly fire from the Royal Navy Destroyer HMS Cardiff near Pleasant Peak on East Falkland Island. All four people on board were killed and the Gazelle helicopters are a black color similar to the helicopter in the picture.  It would seem that the helicopter in the picture is in pretty good condition, so I do not know that it was ever shot down or if a pilot died aboard, but in the picture below, a transparent person wearing a white shirt seems to be sitting at the controls.  Next to him is a woman who was visiting the Fleet Air Arm Station in Yeovilton, England in 1987 by the name of Sayer.  Her friends suggested she hop in so they could snap a picture of her.  Little did they know that she was not alone and possibly that is why she felt a sudden chill while smiling for the photo.  I find myself wondering if Mrs. Sayer's husband was still alive and if this picture is not of a pilot, but rather someone attached to Mrs. Sayer.  So what do you make of the picture?  A trick of light or a spirit? 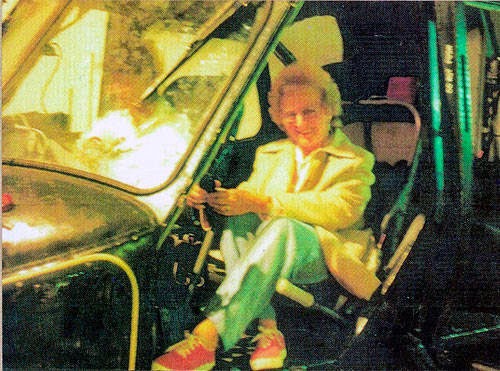 Posted by Diane Student at 6:58 PM