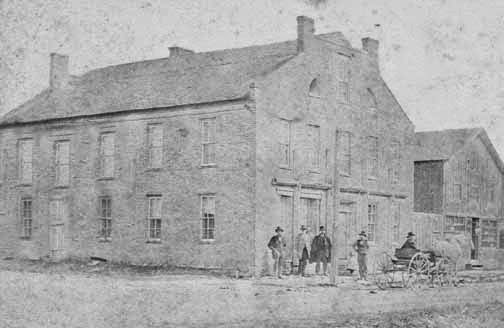 Bentonsport, Iowa is home to the nearly 170 year old Mason House Inn Bed and Breakfast.  Originally named the Ashland House, the hotel was built in 1846 as a place for travelers riding aboard various steamships to stay during their travels.  It was designed and built by Mormons hailing from Nauvoo, Illinois.  Lewis and Nancy Mason bought the inn in 1857 and the name was changed to the Phoenix Hotel.  People started calling the place the "Mason House" and that is the name that has endured.

During the Civil War, a short term hospital was needed to keep wounded soldiers as they waited to travel to a hospital in Keokuk.  Unfortunately, many of those soldiers died at the inn.  The Mason House Inn also had a secret during the Civil War: it was a stop on the Underground Railroad.  The inn is ten miles from the Missouri line and it was considered one of the first stops.  The runaway slaves would hide in the hay loft in the barn behind the inn.

The house remained in the Mason family for 99 years and then passed through multiple hands, receiving renovations along the way.  The Redhead family ran the place for thirty-three years and added the general store that is now attached to the main house and features a couple of rooms.  The McDermets bought the inn in 1989 and in 2001 Chuck and Joy Hanson bought the place and are the current owners. They added the Caboose Cottage in 2006.  Interestingly, electricity and indoor toilets were late in coming to the inn.  The furnishings are antiques and many of them are original to the Masons.

The Today Show names the Mason House Inn as one of the most haunted hotels in America.  The rich history of the Mason House Inn has opened it up to numerous paranormal experiences and a large group of spectral beings.  One such being is the Ghost Dog.  The story goes that the dog's owner, a young woman, was shot by her estranged husband in the parlor of the hotel in 1883.  The dog reacted quickly and came to the defense of his dying owner, mauling her murderer to death.  The poor bereft dog died some days later when he stopped eating and was overcome with grief.  He now roams the property.

Lewis and Nancy Mason's daughter Mary and her husband Frank purportedly have been seen on the grounds and heard arguing.  Lewis and Nancy's granddaughter Fannie had a long history with the hotel.  She was born, married and died at the inn and now seems to still be walking about and smiling to guests.

The history of the inn being a hospital during the Civil War has spawned various tales of men wearing Civil War garb walking around and one even likes to lay down on the beds.  He also apparently likes to knock on the walls.

Current owners, Chuck and Joy Hanson, have experienced countless interactions with unseen entities and Joy even keeps a journal detailing their experiences from 2002 to the current year. 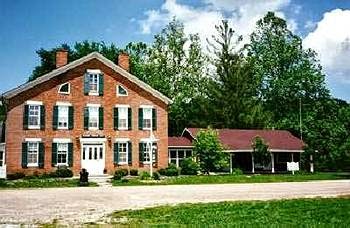 Posted by Diane Student at 9:30 PM